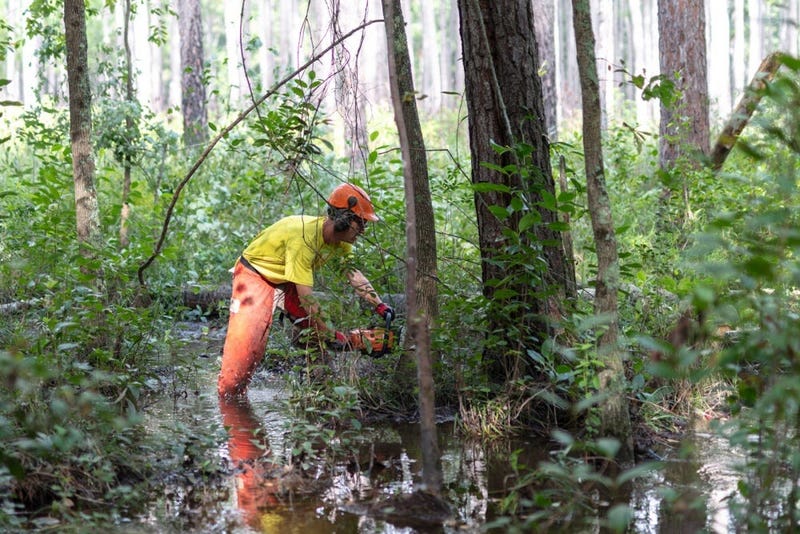 FORT BRAGG, N.C. – Fort Bragg wildlife biologists and researchers made a breakthrough after interpreting the breeding pattern of the St. Francis' Satyr butterfly, referred to as SFS, living on Fort Bragg’s ranges.The butterfly was first discovered in 1983. The species disappeared in 1986. In 1992, they were rediscovered and emergency listed as endangered in 1994. The species was formally listed as federally endangered in 1995.For 17 years, the team worked toward restoring the population of the butterfly through research, captive rearing, and habitat, as they are a disturbance-dependent species.“The two disturbances are fire and beaver activity,” said Brian Ball, a wildlife biologist with the Directorate of Public Works’ Endangered Species Branch, coined as ESB. “Both of those keep the wetlands open for the sedges to grow, which are the host plants for the butterflies. Their habitat without disturbance disappears.”In 2003, Fort Bragg wildlife biologists and collaborators started captive rearing with the hope to figure out captive breeding.“The SFSs are known to have two flight periods, the first one in May and the second one in July,” Ball said. “We had a few breeding occurrences over the years, but we couldn’t figure out what triggered it. Last year, the crew figured out the formula for captive breeding.”Dave Pavlik, crew leader for the SFS Research Project and collaborator who works closely with Fort Bragg’s ESB, closely analyzed the SFS’ behavior and made headway in 2019.“When SFS’ hatch from their pupa in the beginning of the flight period, they are almost always males first,” Pavlik said. “You see this in the field, too. So, we just started keeping the males in the greenhouse longer until females emerged, tried different enclosure types, and let them establish their area. In some of the enclosures, they started displaying their natural behavior like they do in the field. When the females emerged, we put them in with the males and began breeding trials. We saw their natural breeding behavior.”Pavlik said the finding was a huge step for the project explaining that captive breeding results in hundreds of eggs enabling them to release a larger number of butterflies in the wild.“The crew started feeding the butterflies honey water, which extends their life,” Ball added. “The honey water makes the butterflies more active and encourages breeding. It prolongs their lives up to 10 days in the green house as compared to four or five days in the wild. We get an average of about 30 to 40 eggs from a female. From that, about 75 percent survival of the eggs will hatch. In the wild, eggs will be laid, but only a few in the single digits may survive.”In 2019, the team had 21 successful captive-breeding occurrences from butterflies contained in the greenhouse during their second flight period. Of these mating occurrences, five females laid 186 eggs. Of these eggs, 160 hatched. The rest of the captive-breeding females were released to lay their eggs in the wild.“In 2020, we bred six male and female St. Francis' Satyr from butterflies that emerged in our greenhouse during the first flight period (this May),” Pavlik said. “These breeding events resulted in 288 eggs of which 258 hatched. Of those caterpillars, 228 survived to become adults, equaling an 88-percent survival rate.”Pavlik added in this year’s second flight period, the butterflies had approximately 30 breeding occurrences, resulting in over 500 eggs laid in the greenhouse.The results yielded a remarkable increase compared to pre-2019 as less than 10 breeding occurrences took place in the green house.“Because we’ve figured out habitat restoration and captive breeding, that allows us to create sites and release butterflies,” Ball said. “The long-term goal is the ability to create populations off of Fort Bragg. For the butterflies to come off of the federally-endangered species list, the Bragg population has to be stable for 5 to 10 years.”In addition to a stable population on Fort Bragg, Ball added that three populations have to be stable off of the installation for the same number of years.“How rare and unusual it is to be the only place in the world that has this butterfly,” both Ball and Pavlik echoed. “It’s really unique to be in that kind of situation and to contribute to its conservation.”They added that the SFS is only found on Fort Bragg due to its military activities.“The overall goal is to keep rare species off the endangered list and make them more plentiful,” Ball said. “In doing so, we open up more training lands for our Soldiers while still meeting readiness requirements and being great stewards to the wildlife environment.”