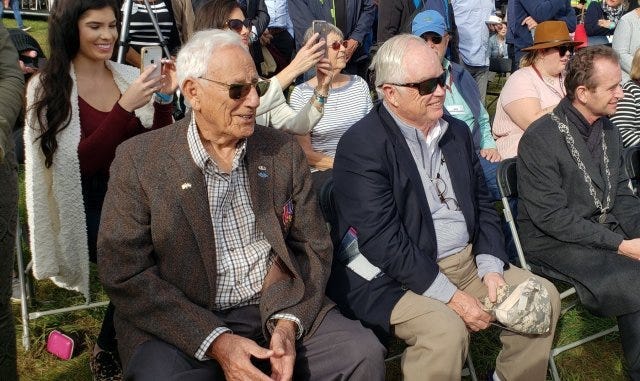 By Staff Sgt. Christopher JelleNine silhouettes bloomed out from the rear of an aircraft and drifted toward the soil of a small field outside the town of Groesbeek, Netherlands. The descending figures belonged to the 11th Air Mobile Brigade of the Dutch Army and carried something special to be presented in honor of two men who had made the same descent 75 years ago.The Netherlands' highest military award, the Orange Lanyard of the Military Order of William, was presented to U.S. Army WWII veterans Gene Metcalfe and Robert C. Blankenship, whose son, Richard Blankenship, accepted the award on behalf of his father on September 18, 2019. 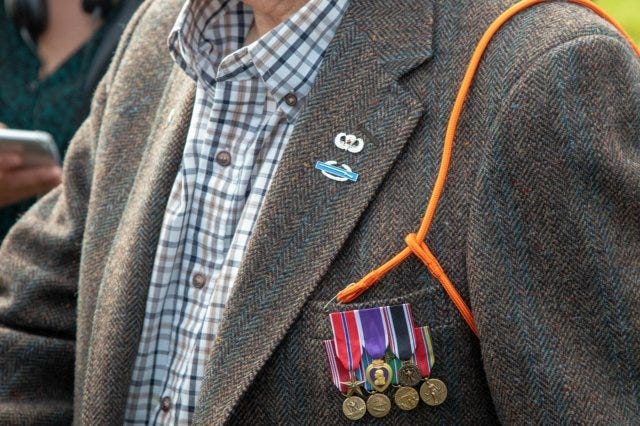 Both men were assigned to the U.S. Army's 82nd Airborne Division and had participated in Operation Market Garden, dropping into the region on September 17, 1944, which led to the liberation of Dutch cities from Nazi Germany forces."It is a lot more pleasurable than it was 75 years ago," Metcalfe said about returning to the area. "The Dutch people are just so grateful. It's just like coming home."Ten hours after landing, the 22-year-old paratrooper was involved in a firefight with a German tank division, where he was wounded by an enemy artillery round. Left for dead, he was eventually discovered by German troops and taken as a prisoner of war.

"This is beyond anything I could have imagined. Seventy-five years ago, they don't even know you're alive," he joked, "and now everyone wants to get to know you and show their appreciation."Robert Blankenship was a first lieutenant and platoon commander of Company I, 3rd Battalion, 504th Parachute Infantry Regiment, 82nd Airborne Division, an airborne unit that descended with gliders during Operation Market Garden.On September 20, 1944, Blankenship crossed the Waal River in the first boat of an assault wave during a daring daylight operation designed to establish a bridgehead and gain ground into enemy territory.

According to an award citation, the events that followed were harrowing. As the next set of boats was preparing to land, an enemy machine gun opened fire from their left flank, wounding several men and pinning down the larger landing. Blankenship moved across 100-yards of open terrain by crawling and moving by leaps and bounds until he was within 50-yards of the machine gun. He fired upon the four-man crew with his rifle, killing them. Blankenship became aware of a concealed enemy sniper five yards from his position. The sniper was firing on Blankenship's scout. With no time to reload his then empty rifle, Blankenship tackled the German and knocked him out with his fists. He then led two of his men within 15 yards of a flak-wagon and neutralized it with hand grenades.Blankenship was awarded the Silver Star in December 1944. He died of a heart attack in 1970."We really didn't know much about his story as kids growing up," said his son Richard. "He never talked about his time in the war, not until the final few years before he passed."The Orange Lanyard award was pinned onto Metcalfe's coat, and Richard Blankenship was given the award in a small display case."I was very honored to present the Orange Lanyard to Mr. Metcalfe and a relative of Mr. Blankenship," said Dutch Army Col. Timo Beaufort, deputy commander of 11th Air Mobile Brigade, who presented both awards. "It's a dream for every modern time soldier to commemorate the veterans, especially the ones who liberated the Netherlands." 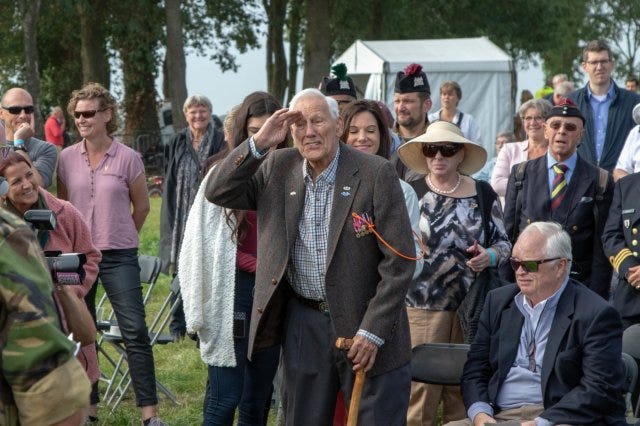