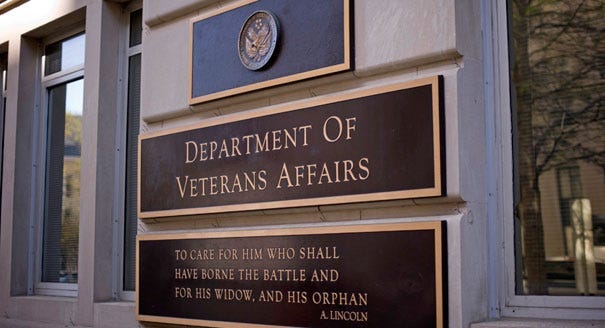 Nearly 80% of Department of Veterans Affairs employees believe racism is a serious, pervasive problem at the nation's second-largest federal agency, and more than half report witnessing racial discrimination against veterans while at work, according to a new union survey.

The nationwide survey released Friday showed 78% of VA staff who responded reported that racism is a "moderate" to "serious" problem at the department, according to the data collected by the American Federation of Government Employees. AFGE is one of the largest unions representing federal employees, including hundreds of thousands of VA staff.

The survey results included responses from about 1,500 VA workers and showed that 76% of employees who responded said they "experienced racially charged actions" while working at the department and 55% said they witnessed racial discrimination against veterans while at work.

About 12% of white VA employees are in leadership positions. Fewer than 4% of Black VA staff are in positions of leadership.

Navy veteran Charmayne Brown, a Kansas City VA Medical Center worker, said on a press call Friday that she experienced sexual harassment and discrimination rom higher-level staff at VA, including racial slurs. When she spoke up about it, she said she was retaliated against.

She said she was called "Aunt Jemima," among other disparaging names and said she saw other VA staff discriminating against veteran patients.

It started in 2003, Brown said, and the continued abuse eventually prompted her to retire last year.

Brown said she's filed 18 complaints against the Kansas City VA. She's one of dozens of VA staff demanding change from VA leaders and asking for a Congressional hearing, along with several civil rights groups. Brown's daughter still works at the Kansas City VA hospital and she too has experienced discrimination, abuse and retaliation, Brown said.

"I'm more determined now than ever before," she said. "This nonsense has to stop. I endured it all my life. I watched my grandmother go through it. Now I have grandchildren old enough to enter the workforce. I'm not going to stand by and watch them endure it.

At an event recognizing Juneteenth, Black employees were told to act as a "living display" of Martin Luther King Jr., Harriet Tubman and George Floyd, according to internal emails and VA staff. Those VA workers spoke on condition of anonymity, saying they feared retaliation from the department.

After that event, VA staff filed dozens of complaints, this time with the local civil rights organizations.

But Kansas City is just one example, the VA staffers said.

They've asked for VA Inspector General examinations of their workplaces, but they never came. Now they're appealing to VA senior leaders and Congress.

VA pushed back on the allegations and survey results, calling the AFGE union "one of the least credible authorities in this country regarding harassment, abuse and unfair treatment," citing allegations of sexual abuse and harassment levied against J. David Cox, former president of the union. Cox was forced to resign earlier this year and union members filed a lawsuit in June accusing the current president, Everett Kelley, and other union leaders of protecting Cox.

"VA does not tolerate harassment or discrimination in any form," VA Press Secretary Christina Noel said. "If AFGE’s stance against discrimination and harassment was as strong as VA’s, perhaps union leaders wouldn’t be subject to a lawsuit accusing them of 'fostering a culture that turned a blind eye to allegations of harassment.'"

Union leaders are specifically asking that VA Secretary Robert Wilkie acknowledge that "racism and discrimination is widespread" at VA, withdraw a plan to ban staff representation in EEO interviews, affirm that all VA workplaces must be free of "bigotry, harassment and retaliation" and ensure those rights are upheld, and meet with AFGE leaders to discuss the "next steps in combating racism at the VA."

“I describe it as a mold – in the dark, secret. It’s quiet, but it’s affecting people of color throughout the VA,” said Marcellus Shields, former VA employee in Wilmington, Delaware and president of the local AFGE chapter. “This is unacceptable. This is something that needs to be pulled out from the root.”