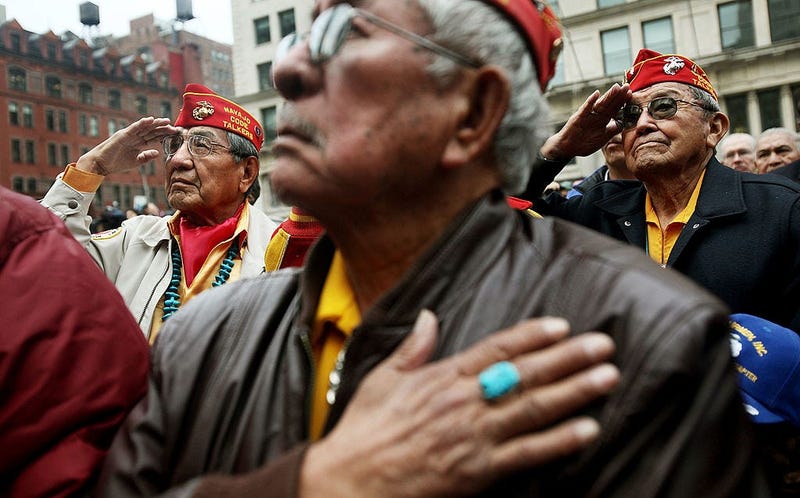 Native Americans and Native Alaskans are more likely to serve in the U.S. Armed Forces than any other group, yet they remain among the poorest and least insured veterans with the least access to Department of Veterans Affairs services.

Tribal leaders and advocates traveled from across the country to Washington to tell members of Congress exactly that, and to highlight the unique barriers to care that Native veterans face, despite histories of service older than the United States itself.

Rep. Julia Brownley, D-Calif., said during the House Veterans Affairs Committee hearing Wednesday that it was the first time in 30 years a Veterans Affairs committee in either chamber dedicated a hearing solely to Native veterans affairs.

Native Americans have served in the American military "since the Revolutionary War ... without being acknowledged as citizens since 1924" and have served at "consistently higher rates than any other ethnic group," Brownley said.

But those same veterans face much higher rates of post-traumatic stress, suicide and other issues shared by fellow veterans. In some cases, Native veterans are twice as likely to have PTSD, said Andrew C. Joseph Jr., of the National Indian Health Board.

There's no other group "that steps up to serve in the Armed Forces" more than Native Americans, Rep. Jack Bergman, R-Mich., said. They have a "deeply embedded patriotism and dedication to service" but face "unique barriers to care. We still have a long way to go to ensure they receive the care and benefits they deserve for their service."

Native veterans are more likely to live far from VA facilities, have lower personal incomes, higher unemployment and are more likely to lack health insurance than other veterans, said Kevin J. Allis, CEO of the National Congress of American Indians. When they finally reach out for care, Native veterans also often face major cultural and language barriers. Native veterans also struggle to form tribal veterans service organizations, which could help navigate the sprawling bureaucracy of the VA and its claims system.

"We serve, we protect and yet we struggle to have parity in the system," said Sonya Tetnowski, a former paratrooper and CEO of the National Council on Urban Indian Health. "I'm sad to report that ... American Indians and Alaska Natives have the highest poverty rate and the highest uninsured rate" of any veterans.

The VA and Indian Health Services are working now on a new agreement for Native veteran health care "that will impact Native veterans for years to come," Allis said.

Chief Bill Smith, vice chairman of the Alaska Native Health Board and a Vietnam veteran, told Congress it took him 35 years to seek help from VA and "it would be really good (for Native veterans) to be at the table for those decisions ... A lot of them have not trusted VA. Talk to us. Work with the tribes."

Rep. Ruben Gallego, D-Ariz., chairman of the House Natural Resources Indigenous Peoples of the U.S. subcommittee, has introduced the Native American Veteran PACT Act, which he said Wednesday would "prohibit the VA from charging Native veterans copays for care."

Gallego said it was necessary to force VA's hand on the issue through legislation.

The U.S. has had hundreds of treaties with native peoples "guaranteeing health care free of cost ... in return for the seizure and occupation of their land," Gallego said, calling VA charging Native veterans copays "a breach of our trust responsibility."

"The federal provision of health care (for Natives) is not a handout," Brownley said. "It is a payment on a debt. That debt has been continuously defaulted on."

Members of Congress, along with tribal leaders and Native advocates repeatedly said they were disappointed and frustrated that VA Secretary Robert Wilkie, or Veterans Health Administration head Dr. Richard Stone, were not at the hearing, despite being asked to attend.

In their place was VA Deputy Undersecretary for Health for Community Care Dr. Kameron Matthews, who, when pushed by Gallego to answer whether VA is violating the federal government's responsibility and agreement with Natives by charging their veterans copays, said VA is currently following its policies.

"It's an issue we're going to look into because we currently charge copays," Matthews said.

While the service of Native veterans was lauded on Capitol Hill Wednesday, House Veterans Affairs Committee Chairman Rep. Mark Takano, D-Calif., said it is "a national shame and a terrible violation of the trust responsibility" the U.S. is meant to uphold to Native Americans and Alaskans that their veterans "endure the lowest health status of anyone else" and have a life expectancy about four years shorter than fellow veterans.