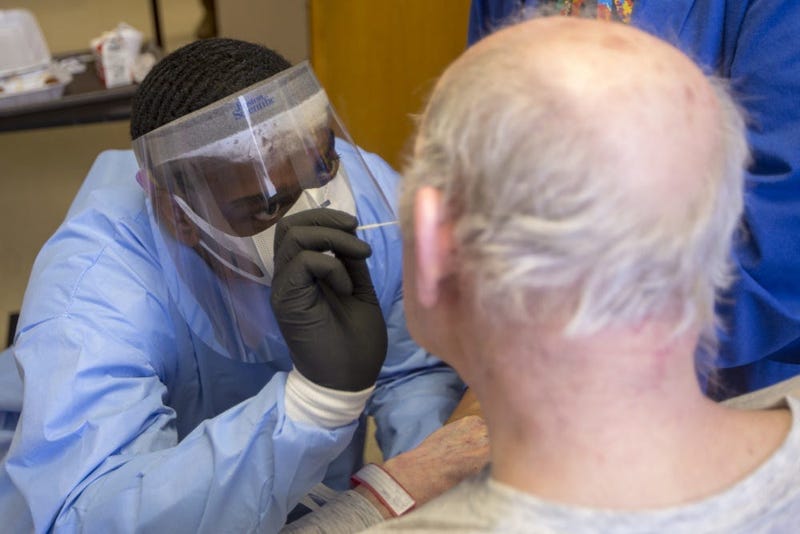 On May 28, Department of Veterans Affairs officials told House lawmakers VA had "adequate testing" and employees could get tested, too. Less than a week later, VA leaders would say the opposite.

Members of Congress pushed back on that. Rep. Matt Cartwright, D-Penn., and others said VA staff told them they were denied tests. For weeks, staff at medical centers in several states told Connecting Vets the same thing -- they were denied tests even though they were regularly exposed to COVID-19. VA officials maintained that employees could get tested.

"Our workforce has had what they need throughout the entire response," Jennifer MacDonald, VA chief consultant to the deputy undersecretary for health, told lawmakers during a hearing on Capitol Hill, later adding that VA had "adequate testing" and any staff with symptoms, or anyone who wanted a test, could have one.

But on June 3, VA leaders appeared to contradict those earlier assurances.

VA Secretary Robert Wilkie touted the department's low staff infection rate, "less than one half of one percent," he said.

The department is capable of processing about 60,000 COVID-19 tests each week, Stone said, but blamed a lack of staff screening on a shortage of the swabs and cartridges necessary for the tests, which he said was a UPS issue.

"When we issued guidance to go to on-demand testing for our employees, we ran out of swabs because of some problems with UPS shipping," Stone said. "That was a national problem, with the crashing of UPS systems for a weekend. We have not recovered from that. Right now, we have about 60,000 tests available, but we do not have the ability to institute on-demand testing for our employees. It's our intent to get there."

Stone did not give a timeline for when that testing capability would be available. VA officials have pledged repeatedly that on-demand testing would be made available for staff.

"Thousands of VA employees put themselves in harm's way," Wilkie told lawmakers. "They deserve the thanks fo the American people ... We have sent people into extremely dangerous situations. They have responded magnificently. We actually have a lower absentee rate and a lower leave-request rate this year than we did last year because people have responded to the call to duty as they always do.”

Though Wilkie acknowledged staff in "extremely dangerous situations," VA has maintained that none of its staff need hazard pay for their work during the pandemic.

Some VA workers have also told Connecting Vets they were not allowed to take leave during the pandemic because some areas were short-staffed, and if they took leave they were penalized.

As of June 8, VA had 1,631 staff cases of the coronavirus. Of those, 118 cases are considered "active." At least 33 VA employees have died of the virus, according to department data. At least 22 VA medical centers have had at least one employee die of the virus. VA officials said the department has administered more than 215,000 tests nationwide. About 7.3 percent of those were positive. At least 1,343 VA patients have died of complications related to the virus.

Some employees and union leaders have blamed lack of personal protective equipment -- a shortage VA leaders denied for months, though internal memos showed rationing -- for staff illness. A Department of Labor investigation is examining allegations VA "endangered" employees and patients because of protective gear shortages.

On June 9, the Senate Veterans Affairs Committee is set to hold a hearing specifically on VA's supply chain, which leaders say was interrupted during the pandemic, leading to protective gear rationing.