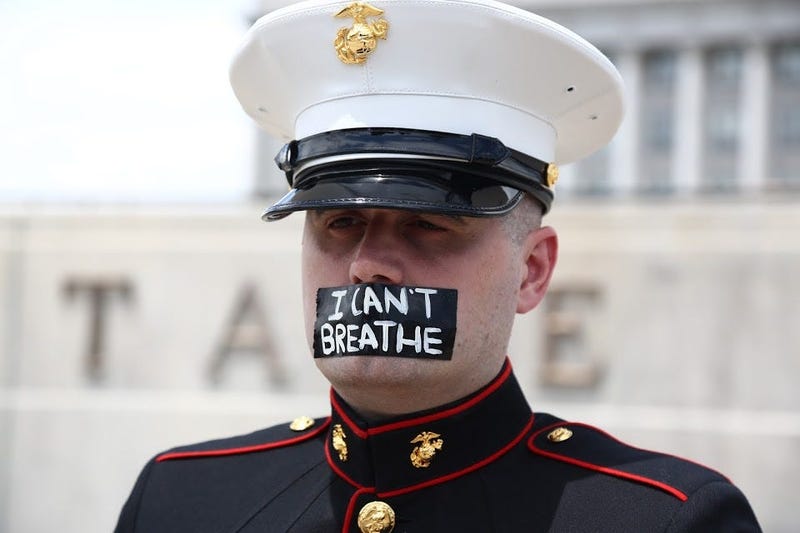 Editor's Note: This is an opinion piece. The thoughts expressed are those of the author.

As courageous voices around the world rise together in a deafening roar to oppose the injustices facing our fundamental human rights, I stand humbled among you. Racism, bigotry, hatred—these deplorable ideologies lead only to misery and suffering. History has proven this time after time.

Growing up in a small, rural town in south-central Kansas, I witnessed firsthand the destructive nature of racism. Extremist demonstrations were not uncommon, and many who would claim not to be racist tinged their speech with racially charged stereotypes and disparagements. Enlisting in the Marines allowed me to learn from men whose skin was a different color than mine that, ultimately, we are more similar than dissimilar. It does not do justice to the bond formed by Marines in combat to say that I came to love and respect these men as brothers, but I have no better description to offer. These men taught me the true meaning of the Marine Corps principles of honor, courage, and commitment, as well as the ideal that one must lead by example. 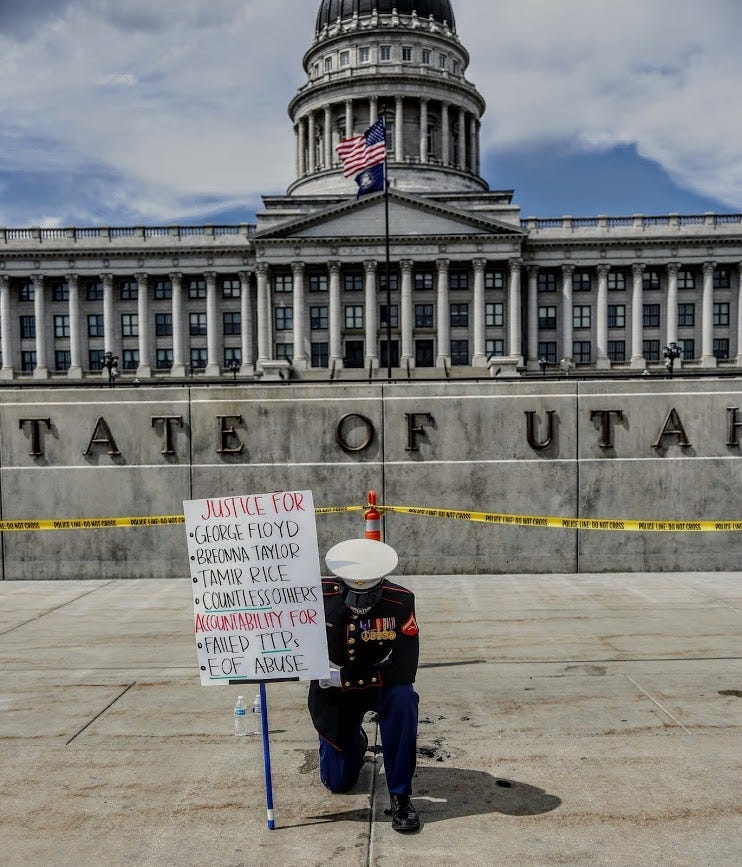 When I put on the Marine Corps uniform for the first time in 2004, I swore to support and defend the Constitution. There’s no qualification on that. It’s not until a specific date, or only for certain people. On June 5th I put on my uniform, determined to stand in silent resolve for all human beings wronged by the injustice of racism and abuse of authority. For three hours I stood at attention in front of the Utah state capitol as the summer heat reached nearly 100 degrees. At the end of this vigil I knelt in solidarity for 8 minutes and 46 seconds to honor the loss of life that spurred me once again to action. It is to my great shame that such horrific events were required to remind me of my duty. Those three hours I stood in watchful silence marked an end to my failure in speaking out against unconscionable ideologies.

To demonstrators around the world: I stand with you. Your actions continue to inspire me. Although I deliberately conducted this demonstration independently and do not belong to any specific political organization, know that I stand proudly beside those of you who speak out against racism and injustice. I will continue to stand with you in the struggle for fair treatment under the rule of law. The fearlessness you have shown by speaking out against brutality, and for many of you to do so peacefully in the face of violent confrontation, speaks volumes about your character. Being able to face down violence with steadfast resolve, returning to use your voice even after being met with tear gas, battered with batons, and pelted with rubber bullets, requires remarkable courage. 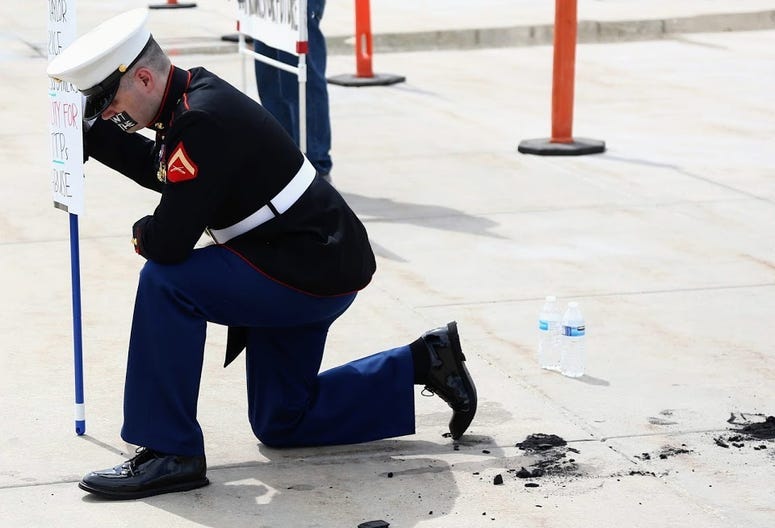 To my fellow Marines and veterans: I’ve been honored by the outpouring of support from so many of my brothers and sisters, both active duty and veterans. To those of you who have been upset or disturbed by my decision to wear the uniform during this demonstration, all I have to say is, you’re right. I support and understand your feelings. This is not a decision I made lightly. However, while it was—in a prescriptive sense—wrong, I believe it was the morally and ethically correct decision to make. There are many ways to promote change. Those of you who feel a desire to get involved, I would encourage you all to think carefully about the best way to do so. Lifting where you stand—whether in your community or platoon—can be a powerful way to affect change.

To law enforcement, in America and abroad: Some of the best men I’ve ever known serve as police officers, highway patrol, and border patrol agents. You have an extremely challenging and often thankless job. Many officers have taken oaths similar to my own—a directive to act with integrity, uphold the law, and protect your community. Militarization of police has increased the capability to react to extreme situations, but training and accountability has not kept pace with these changes, eroding the public trust and endangering officers everywhere. Reform is needed to increase the safety of officers and the communities they serve. America is not a war zone. The people are not your enemy. Dehumanization of the populace and the abuse of authority by law enforcement cannot be allowed to continue here at home or abroad.

I am not a perfect ally. Looking back at my life, I recognize with remorse the influence of misguided ideals. No one is born with these ideas. We learn them, and we can unlearn them. Recognizing these flaws within ourselves is not easy, or comfortable. Even after realizing the error of my ways, I made the mistake of remaining silent in the face of continued, systemic discrimination. I vowed to uphold and defend the Constitution, a document that guarantees all Americans—regardless of the color of their skin—equal and just treatment under the law. Finding the moral courage to identify such flaws through self-reflection and dedicating ourselves to eradicate them is no simple task. We must each have the strength of character to act with compassion and understanding toward our fellow human beings, and the resolve to see these changes through.

Every voice, large and small, must come together as one to condemn the racism, intolerance, and bigotry that seeks to tear our societies apart. It has been and continues to be my great honor to serve my fellow Americans. My love for this country and its people is what drove me to serve in 2004, and what motivates me still today. Those of us who have stood by for far too long, it is never too late to stand up for what is right. 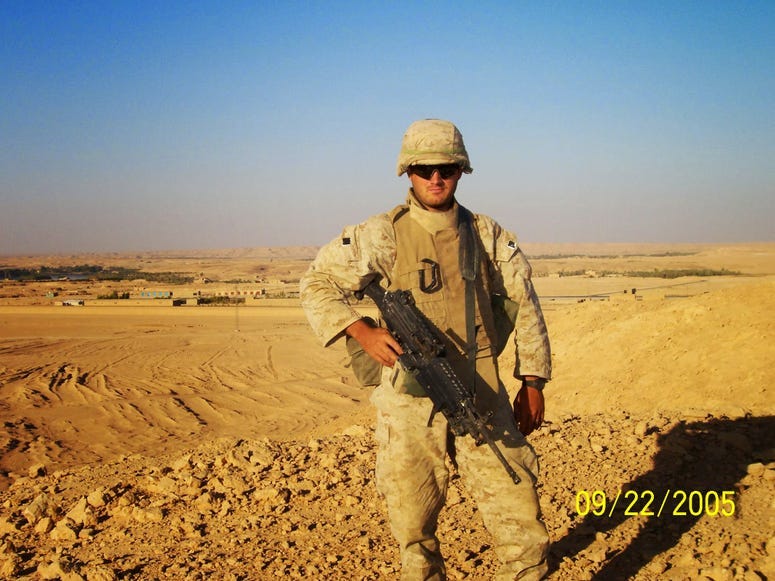