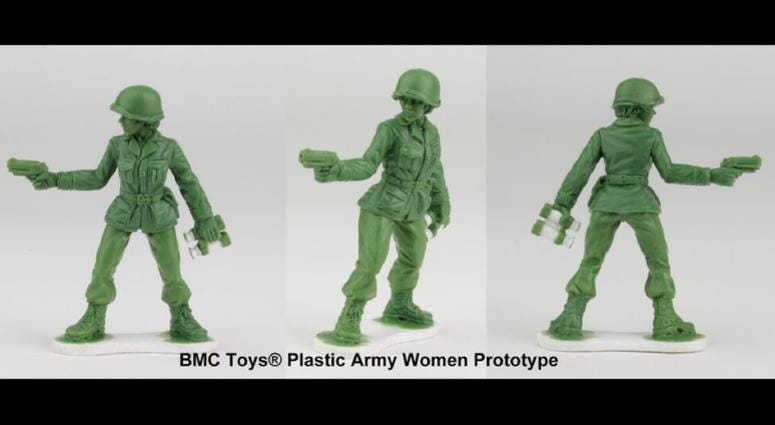 Little Green Army women may not be missing in action much longer.

Toymaker Jeff Imel, president of VictoryBuy Inc. is committed to production of the plastic figures "in time for Christmas 2020," he said in an interview with Connecting Vets.

A Kickstarter crowdfunding campaign launched Nov. 14 for pre-orders, meeting its fundraising goal in the first 12 hours and raising more than more than $50,000 by Dec. 17.

Toy troops: Where are the plastic Army women?

The exact designs of the classic plastic toys are still not 100-percent certain, but some poses have already been decided.

The figures also are planned to be available in at least three colors: olive green, tan and pink. They'll be made in the U.S.

"I know some supporters don't like the idea of pink soldiers, but a lot of folks asked for the option," he said.

"The once concern I have is lots of military women have strongly expressed their opinion that non-regulation hair bothers them," he said. But for the tiny toys, getting regulation hair in the design may be difficult.

"The issue is that visually, for a female version of the classic plastic toy soldier, I think some hair details on at least some of the figures is important," Imel said. "Artistically, the model looked better with hair."

The sculptor for the figures has already tried several different lengths and styles of hair, he said.

"I'm looking to make a toy that kids will like and have fun playing with, not historically accurate models," Imel said. "But I don't want to offend military women. Hopefully I can express this in a way that is acceptable."

Interest in Imel's project to create women figures to join the male soldiers, who make up one of the most ubiquitous American toys in history, began after a six-year-old girl, Vivian Lord, mailed letters to toy companies asking them to make women toy soldiers. 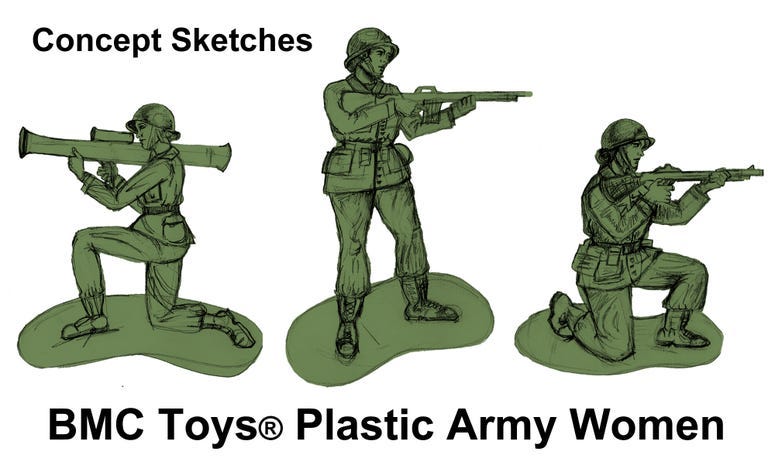 Plastic Army men, sold in buckets and bags, have changed a lot through their more than 80 years. But a few things have remained constant -- most of them are still green, and they're all men.

In her letter, Vivian appeals to the toy companies: "My friend's mom is in the Army too! I saw the pink ones, but those aren't girls and people in the Army don't wear pink." 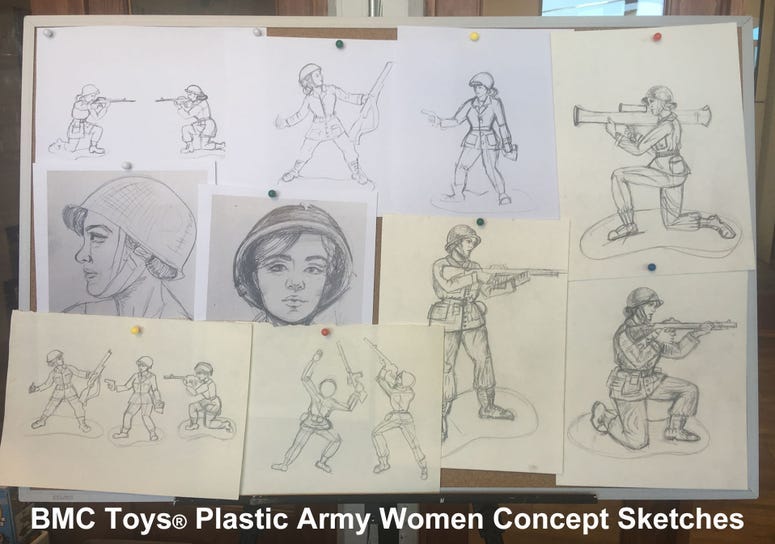 Imel's toy company, BMC Toys, seems to be the first to seriously consider allowing women to join the ranks in a major way.

But after Vivian's letter made headlines and after national media -- beginning with Connecting Vets -- published stories on the subject, Imel said he has had much more interest. Subscribers to a newsletter about the project have more than doubled and now there is a PlasticArmyWomen.com.

The plan now is to have packs of plastic Army women in multiple poses and colors, Imel said, but those plans might not be the end.

"There's been some great figure suggestions that I didn't include because they should be part of a future Navy and/or Air Force set," he said. "I'm staying with the ground infantry combat theme for this mold."

He said he's also planning bucket and boxed playsets, some of which may include men and women in the same set "which has been another frequent request," vehicles or even a WAC HQ.

In addition to the first plastic Army women, Imel said he's also had a hand in the first set dedicated to the Buffalo Soldiers. He's also considering merchandise to go along with the release of the plastic Army women, including buttons, magnets, stickers, hats, T-shirts and more for those who backed the campaign.

Imel said he heard from a supporter who told him she'd wanted a set of women soldiers for more than 60 years.

"It's not too often you get to help fulfill a Christmas wish from six decades ago," he said. 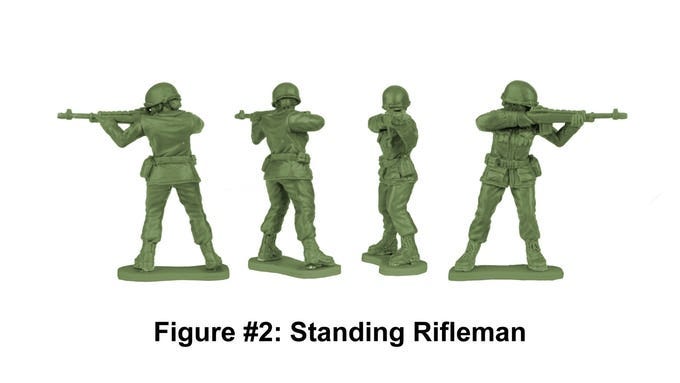