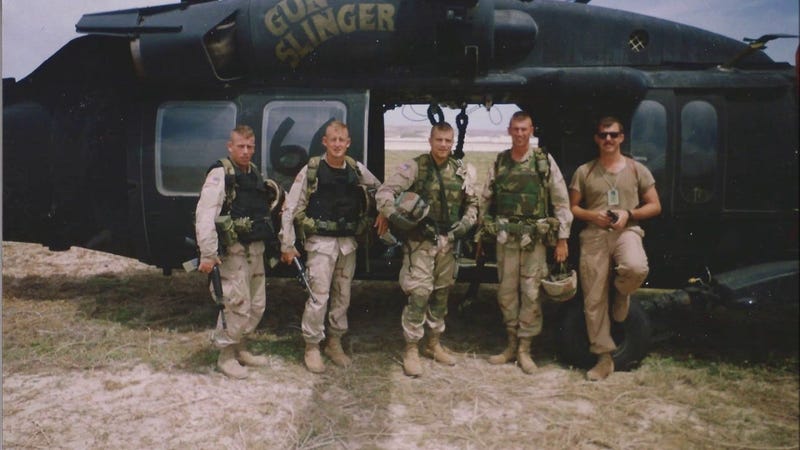 "There's not a day that's gone by since October 3rd of 1993 that I have not thought about that battle. Whether it's because I wear the memorial bracelet of the soldiers killed there or not — that was burned into my memory bank, that day," said Matt Eversmann.

Eversmann and Larry Moores were two Army Rangers during Operation Gothic Serpent, on the ground leading teams of Special Ops on the day a 90-minute operation turned into a 15-hour battle in Mogadishu, Somalia.

The battle led to the book and movie "Black Hawk Down," and twenty-six years later, they say the lessons learned that day — for both military personnel and civilians — are still fresh.

"I think the mission opened a lot of eyes. Do we necessarily need to be in a lot of these places? What is the U.S. appetite for loss," says Moores.  "Is there a certain - you never want to put a number on anything - but that day when we lost the amount of casualties we did, was that where the senior leadership made a decision that, 'Okay that's the point where we don't want to go any further?'"

"There were so many lessons learned for the military in general of all services of things we did poorly. Things we did wrong. And it was shared very openly and even though that can be a little painful and sting a little bit, the greater good was that Soldiers, Sailors, Airmen, Marines learned some really valuable lessons and those lessons in modern warfare carry on for a long time."

Everything that could go wrong that day did.  Eversmann remembers a lot of bad luck — really fast.

"On October 3rd we flew right into the hornet's nest," Eversmann said. "A lot of bad luck situational things happened in such a short amount of time. We had an immediate casualty — one of the Rangers fell out of the helicopter. We were immediately engaged by the enemy. The communications were down, in 30 seconds of starting this battle on the 3rd of October."

At the end of the battle, eighteen American service members had been killed and 73 were wounded — and America saw it all on the news.

"There are people at the tip of the spear that carry a lot of weight on these missions that don't get the due recognition that they deserve," said Larry Moores. "The story needs to be told better. Bowden's book and the subsequent movie really did that properly — highlighting the mission and the successes of that mission."

"Twenty-six years later, it's not a lot different than two days after the fight," Moores said about the raw emotion.

"It wasn't like anything we'd seen in years," Eversmann said. "In modern warfare, post-Vietnam, we hadn't seen up close a single, specific battle story that all of a sudden went from, 'Hey wait no one has ever heard of Mogadishu to this elite special operations community is there and oh by the way 18 people were killed and one was captured.'"

For that reason, Eversmann explained, the events of Operation Gothic Serpent were always going to have a significant impact on the American civilian population. But Mark Bowden's book and the subsequent movie by Ridley Scott and Jerry Bruckheimer really helped civilians understand the special operations community in a way they had never been able to before, according to Moores and Eversmann.

"It captures the reality of it and the reality is that it's really chaotic, it's really loud, it doesn't go according to plan, it doesn't always work out," Eversmann said. "This allowed the whole non-military world to see urban battle. They got to see this special operations world up front and up close and have a little bit better understanding."

"The story showed the tenacity and the valor and the courage and the bravery of these young men on the battlefield," Eversmann added. "Ultimately, they did accomplish that mission. And real war comes at a price. And I don't think we'd seen that before."

"I think the book and the movie added to the understanding. That was the intent," Moores said. "To highlight that battle and show what these young kids were able to do in enemy territory under very difficult circumstances."

Both Moores and Eversmann, along with others from the special operations community who participated on Oct. 3, 1993, were given the opportunity to review the script and the screenplay throughout the production process for accuracy.

"They didn't have to do that, they could have just filmed the movie with the inaccuracies and with whatever," Moores said. "That says a lot about him and what he wanted to accomplish with producing a movie of this caliber."

Moores and Eversmann will always remember the events of Operation Gothic Serpent and Black Hawk Down — but they both believe the movie has ensured the public will remember it too.

"From a 26-year later perspective, it's just as important today to tell the story about the young Rangers that fought that day as it was back then. Because we want to close that gap. We want people to understand what we go through as a team, as an elite team fighting in difficult situations, because we do this for that bigger part of the population. We don't just do this for this small percentage of people who have worn the uniform. We do it for everybody back here. This bigger audience needs to understand this gap between big America and the veteran space," Moores said.

"Two of my guys that I lost in Somalia were two young E5's," Moores added. "They can't tell the story anymore so it's important for us because we still have a voice and we have venues to do that. We have to be the ones that relay their heroic actions to everybody else."