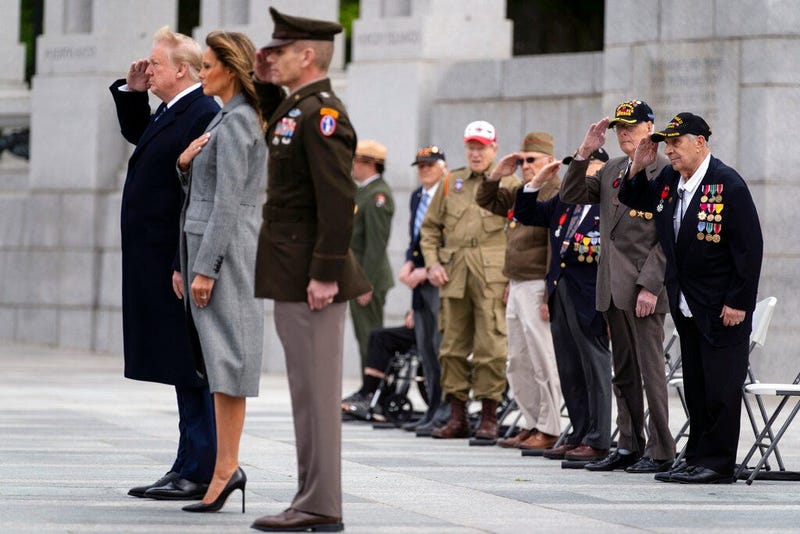 President Donald Trump and top military and veteran leaders met with World War II veterans in Washington, D.C. on Friday to honor the 75th anniversary of the Allied victory in Europe, but few wore protective masks.

The president greeted the seven veterans from a distance because of COVID-19 concerns but did not wear a mask, according to a White House pool video and photos of the event.

Esper, Wilkie and others posed for a photo with some of the veterans at the event. During the photo, Esper and Wilkie stood close to the veterans. Esper also was shown in the video handing them challenge coins he pulled from his pocket. At other times, Esper and Wilkie appeared to keep their distance.

Pentagon spokesman Jonathan Hoffman said Esper was tested for the virus two hours before the event and was negative. Hoffman did not share information on what type of test Esper took.

VA did not immediately respond to requests for comment about why Wilkie did not wearing a mask at the event.

Melnikoff, 100, was an Army infantryman in the war, responsible for capturing more than 10,000 German soldiers and said he was not concerned about traveling from his home near Baltimore for the event.

Seniors could be at higher risk for illness or death if they are infected with COVID-19, according to the Centers for Disease Control and Prevention. VA treats more than 9 million veterans and about half are older than 65.

As of Friday, at least 834 veterans had died because of the virus, according to VA data, and thousands more were sick.

White House spokesman Judd Deere said the veterans were "choosing nation over self" by attending the ceremony Friday with the president.

"These heroes are living testaments to the American spirit of perseverance and victory, especially in the midst of dark days," Deere said in a statement.

Kristofer Goldsmith, an Army veteran and associate director of policy and government affairs for Vietnam Veterans of America criticized leaders for a lack of safety precautions.

"Senior leaders of all types -- and that includes Secretary Wilkie and Secretary Esper 00 should model good behavior to subordinates and follow CDC guidelines when in public," Goldsmith said on social media. "Standing shoulder-to-shoulder with our nation's most at-risk veterans without a mask during a pandemic is not that."

Several people in the White House have tested positive for the virus recently, including a sailor serving as a military valet for the president and Vice President Mike Pence's press secretary.

Are you a service member or veteran, family member or VA employee affected by the coronavirus? Contact Abbie Bennett: abbie@connectingvets.com or @AbbieRBennett. For secure communications, email abbierbennett@protonmail.com.