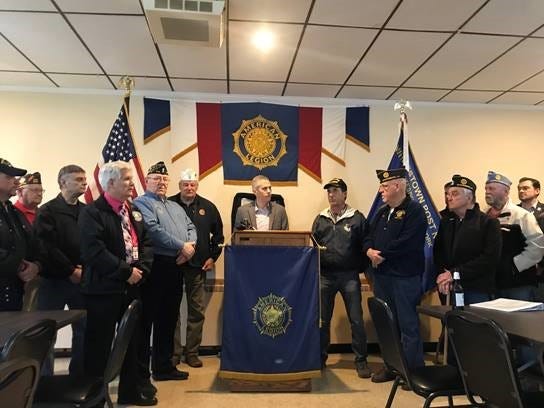 VA employees whose task it is to prevent veteran suicides by identifying high-risk veterans and making sure they get help are “overworked” and “unable to keep up” with the demand, Rep. Anthony Brindisi, D-N.Y., said.

Veteran suicide is a 'gut-wrenching' 'crisis,' officials say. Here’s what Congress is doing about it.

Brindisi is sponsoring the “Support for Suicide Prevention Coordinators Act” filed April 18, which is intended to ensure that those VA staff members “have the tools and resources they need to provide veterans with critical mental health resources,” a news release from Brindisi’s office said.

“Twenty veterans die by suicide every day,” Brindisi said in a statement. “This is wrong and unacceptable, and we must do more. It is our responsibility to ensure every veteran has a place to turn when he or she needs help. Our bill is an important step to improve VA suicide prevention resources and ensure all veterans have access to the life-saving mental health care they need.”

The bill would require an assessment of the responsibilities, workload and number of vacancies in the Department of Veterans Affairs suicide prevention coordinators.

How to #BeThere for veterans contemplating suicide

Suicide prevention coordinators “are the face of the VA’s efforts to combat veteran suicide,” according to Brindisi.

“It’s clear we’re not doing enough to support our veterans when they need it most, but the truth is there’s a lot we still don’t know about veteran suicides,” Rep. Mark Takano, D-Calif., chairman of the House Committee on Veterans' Affairs, said in a statement. “That’s why I’m proud to support this legislation to require GAO to review training, workload and staffing at VA to ensure this critical workforce is prepared to care for veterans in crisis.”

“At the forefront of this national epidemic are the caring VA suicide prevention coordinators,” Rep. Jim Banks, R-Ind., said in a statement. “I am proud to co-lead this bipartisan legislation that will help those who work tirelessly to save the lives of our beloved warriors.”

“We have a duty to ensure our heroes considering suicide have access to the tools and resources they need to know they are not alone,” Rep. Mike Bost, R-Ill., said in a statement. “But we have our work cut out for us.”

If the bill passes, a report on findings will be due to Congress no later than one year after its passage.

For more information on potential warning signs of suicide, click here.
If you or someone you know needs help, contact the Veteran Crisis Line 24/7 at 1-800-273-8255 (select option 1 for a VA staff member). Veterans, service members or their families also can text 838255 or go to veteranscrisisline.net.
Follow Abbie Bennett, @AbbieRBennett.Why do vets commit suicide? Operation Deep Dive hoping to provide answers