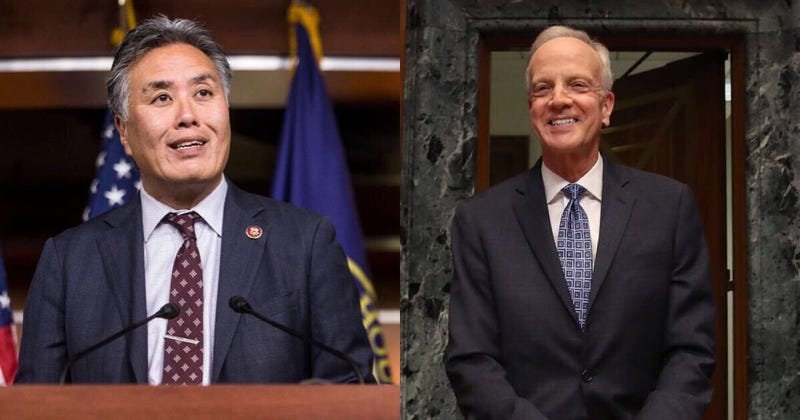 This story originally published Sept. 9, 2020 at 6:02 p.m. EST. It was updated Sept. 10 at 10:40 a.m. and 1:30 p.m. EST to reflect that House Veterans Affairs Committee Chairman Mark Takano said a deal may be close but had not yet been finalized on passing the Commander John Scott Hannon Veterans Mental Healthcare Improvement Act and other House measures.

The top Veterans Affairs lawmakers in Congress may be close to an agreement that would pave the way for major veterans suicide prevention legislation to pass before the end of this year.

Sen. Jerry Moran, R-Kansas, said during a Senate Veterans Affairs Committee hearing Wednesday that his brief absences was due to ongoing negotiations with his counterpart in the House, Chairman Mark Takano, D-California, on a deal to pass Senate and House priority legislation.

"We have reached an understanding that the House will take up (the bill) on Sept. 21 or 22," Moran said, adding that the agreement "presumably" includes House passage without any amendments. "That is exactly what we're looking for."

But on Thursday, during a House committee meeting on a separate slate of veteran suicide prevention bills, Takano said a deal may be close, but had not been finalized, and he had not yet spoken directly to Moran.

"This committee has been trying to work with the Senate for six months on comprehensive veteran suicide prevention legislation, and after promising staff-level conversations, we're pleased to hear they're committed to moving forward with meaningful improvements to help reduce veteran suicide and help prevent veterans from falling into crisis," he said. "I look forward to speaking with Chairman Moran directly, since we haven't had that opportunity yet, and discuss further his commitment to pass the House's bipartisan additions to S.785. As we will hear today, there are much needed improvements to strengthen S.785 and fully meet the needs of our veterans."

At the end of that House hearing, Takano said he believed the two chambers were nearing a deal.

At issue are the Commander John Scott Hannon Veterans Mental Healthcare Improvement Act , an omnibus bill containing major bipartisan priorities, which passed the Senate in August, and a slate of suicide prevention legislation set for markup in the House Veterans Affairs Committee this week.

The clock is ticking on this session of Congress, with few legislative days left on the calendar, major legislation related to the pandemic and defense spending left undone, and elections fast approaching. Veteran service organizations, senators and Department of Veterans Affairs Secretary Robert Wilkie have all increasingly put pressure on the House to move the Hannon bill forward since it passed the Senate, and get it quickly to the president's desk for final approval.

"It's our understanding that this is a bill that would be signed by the president and so would become law," Moran said. "Any delay in getting us to that position in my view costs those who served our country the potential loss of life."

In return for an "expeditious effort" to pass the Hannon bill in the House, Moran said the Senate would "then make every effort to pass, by unanimous consent, a number of bills that are priorities for Chairman Takano" and the House Veterans Affairs Committee related to veteran suicide prevention. Those efforts would include working to pass at least some of the bills unanimously out of the Senate committee and putting the rest in a package for consideration by the Senate with a goal of passing those as well.

On Thursday, Takano said it would be "wrong to congratulate ourselves on passing a suicide prevention bill" that did not include specific measures for women and Native veterans, emergency mental health care, better firearms safety and more. He said the House package of veteran suicide prevention bill addresses "gaps" in the Senate legislation and must also pass.

"It would have been easier for this committee to simply pass S.785 as it was sent over to us by the Senate," Takano said. "However, I prefer to take the harder, more substantive approach." That approach, Takano explained, would need to include "some reciprocity" from the Senate in expediting his committee's priority legislation related to veteran suicide prevention.

VA data shows about 20 veterans service members die by suicide daily. That number has remained largely stagnate or worsened in recent years despite increased spending and programs aimed at helping. The data typically lags behind by two years, though, making it difficult to determine whether efforts have been effective.

Those statistics have sparked growing urgency among VA leaders and lawmakers in Congress who have named veteran suicide prevention a top priority.

"My commitment is to see a victory, not for the Senate Veterans Affairs Committee, not for the House Veterans Affairs Committee, but a victory for those who served our country, our veterans, and the organizations that are attempting to save their lives and provide mental health care and treatment," Moran said. "There is no reason that whatever appreciation that comes from the passage of this legislation cannot be shared by those who serve on the veterans committee in the House."

Moran pledged to work with Senate majority leaders and his committee to pass bills from the House on veteran suicide prevention in return, without delay.

"Nothing ought to stand in our way to protect the lives of those who served our country," Moran said.

The Hannon bill aims to improve mental health care provided by VA through measures including:

The bill would provide about $174 million over five years for VA mental health care services, including the grant program for local organizations.

Some of those measures are reflected in bills under consideration or already passed by the House committee, and House lawmakers have added other legislation to round out their growing package of suicide prevention efforts they say fills gaps in the Hannon bill, including:

The House discussed those bills during its Sept. 10 hearing.