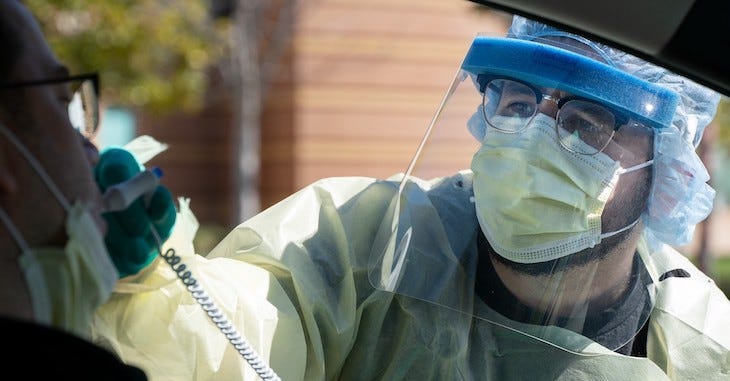 This story originally published Nov. 5 at 4:22 p.m. It was updated Nov. 6 at 12:20 p.m. to reflect a further significant increase in active cases, now doubling since one month ago in October rather than just September's figures.

The number of Department of Veterans Affairs patients and staff sick because of the coronavirus have reached record highs for five straight days as of Nov. 6 -- more than doubling since this time last month.

The last peak in active cases at VA was on July 20, when the department recorded 6,424 cases.

The number of active cases fluctuate throughout each day and have done so daily through much of the pandemic as VA adjusts to record patients who have recovered from the virus as well as those who have newly tested positive and are showing symptoms.

The spike in active cases this week represents an about 18% increase so far this month. October began with 3,331 active cases and ended by recording more than 5,800. Active cases have doubled since this time last month. The vast majority of those cases are veteran patients. 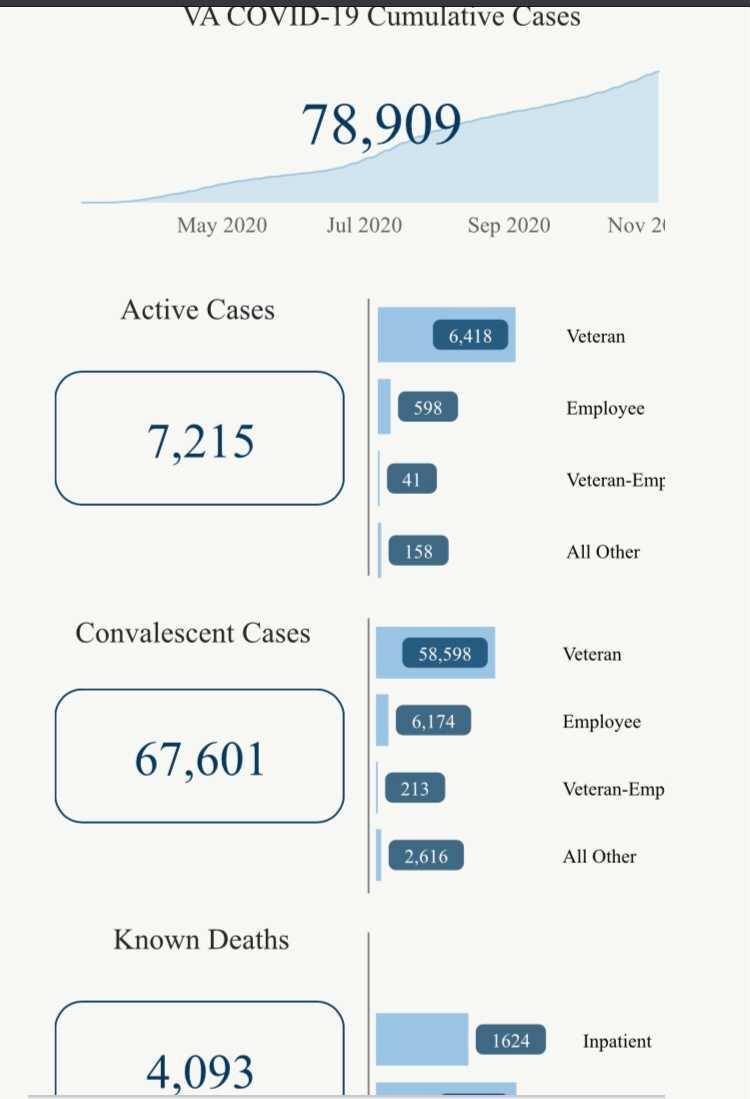 On Nov. 1, VA also recorded 4,000 deaths from complications caused by the virus, and since then has added more than 100.

Since VA cares for about half of the roughly 18 million veterans in America, its numbers are representative only of those in its care and do not include veterans who receive care elsewhere or who do not qualify for VA health care.

VA's overall mortality rate is about 5.2% is still more than double the about 2.5% mortality rate for Americans overall, according to the most recently available Centers for Disease Control and Prevention data.

Seven months since VA recorded its first veteran lost to the virus the department has averaged about 17 deaths per day, roughly equivalent to the rate of veteran suicide, according to VA data, which the president, lawmakers and advocates have all referred to as a "crisis" and a "top priority."

VA's mortality rate is influenced by the age and overall health of its patients, who tend to be older and less healthy than the overall American population. VA's data also includes its staff and some non-veteran patients the department treated as part of its Fourth Mission. As of Nov. 5, VA recorded 64 staff deaths, adding two deaths so far this month.

Increases in the overall number of deaths at the department appear to generally follow in the wake of trends in active cases increasing both at VA and across the United States overall.

Active cases at the department fell steadily for about two months before they began to rise again in late September. Department leaders said this summer they were preparing for a second wave of the virus during the fall and winter. In October, Dr. Anthony Fauci, director of the National Institute of Allergy and Infectious Diseases, told military and veteran caregivers that the United States may have a "very difficult fall and winter" because of the pandemic.

"Trends in new cases generally reflect what is going on in the country and local communities," VA Press Secretary Christina Noel said previously.

The number of patients at the department who require hospitalization -- the statistic VA cites as the most reliable judge of how it's patients are faring amid the pandemic -- has consistently fallen since a height of 38% in March, to about 15% in October, Noel said Thursday.

But the number of patients hospitalized also appears to be rising in recent weeks. In the latest of VA's weekly pandemic response reports for Oct. 27-Nov. 2, the department recorded 606 COVID-19 inpatients, a more than 75% increase since earlier in October.

VA is also nearing 80,000 total cases, adding more than 4,000 so far in November. Of VA's more than 79,000 total cases, about 86% are considered convalescent, meaning they have either recovered or passed the 14-day mark since their last positive test.

The department's total case count now approaches the total number of cases confirmed in several states, such as Kansas (82,991) and Connecticut (71,238), according to CDC data. VA's total number of cases exceeds those recorded in more than a dozen states. The department cares for a total of more than 9 million veterans, roughly half of the veterans in the United States, and has nearly 400,000 employees.

VA recorded 879,457 total COVID-19 tests administered nationwide during the pandemic as of Nov. 2 and has not updated that total publicly since then. That total number of tests does not reflect how many individual people have been tested at VA, but rather how many tests have been administered -- some people may receive multiple tests. In October, VA averaged more than 3,800 COVID-19 tests per day, lower than the September average of more than 4,700 per day.

VA Medical Centers in Maryland, Louisiana, New York, New Mexico, Texas, Arkansas, North Carolina, Colorado, Illinois, Nevada, Florida, Georgia and others have been selected to participate in a new COVID-19 vaccine trial, the fourth large-scale trial in the United States, according to department news releases. Veterans can volunteer for the studies, but researchers are asking especially for frontline and essential workers as well as Black, Hispanic and Native American volunteers.

Some veterans have been disproportionately affected by COVID-19. Results of a VA study of more than a quarter of a million veterans released late in late September showed that Black and Hispanic veterans were twice as likely as white veterans to test positive for the virus at VA, which researchers said indicated an "urgent need to proactively tailor strategies to contain and prevent further outbreaks in racial and ethnic minority communities. Department data provided to Connecting Vets this summer showed Black and Hispanic veterans made up nearly half of all VA patients who tested positive for the coronavirus, though they only comprise about 23% of all department patients.

Veterans Affairs records 4,000 deaths from the coronavirus as active cases continue to rise