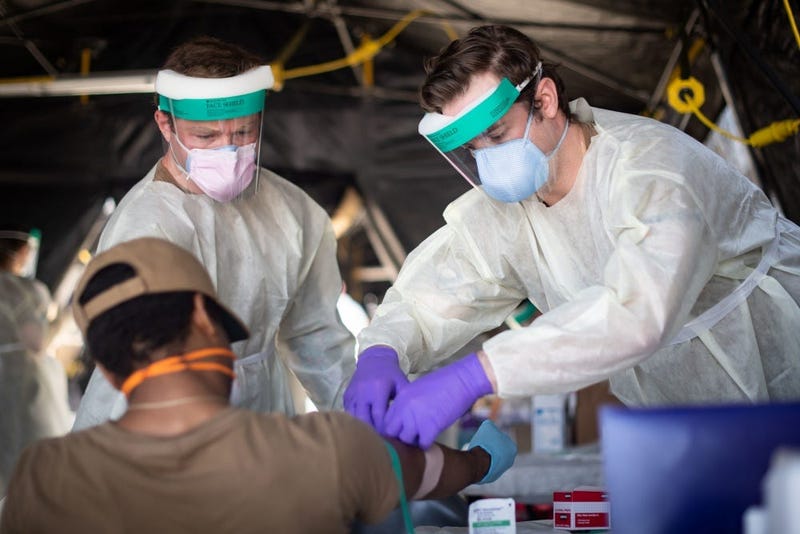 The Department of Veterans Affairs surpassed 70,000 total COVID-19 cases and is nearing 3,800 total deaths as active cases surge to 5,000 for the first time since early August.

Those grim milestones come just days after Dr. Anthony Fauci, director of the National Institute of Allergy and Infectious Diseases, told military and veteran caregivers at an annual Elizabeth Dole Foundation event that the United States may have a "very difficult fall and winter" because of the pandemic.

VA's total case count now approaches the total number of cases in several states, such as Kansas (72,968) and Connecticut (64,455), according to the most recently available Centers for Disease Control and Prevention data.

Active cases at the department fell steadily for about two months before they began to rise again in late September. As of Oct. 22, cases had increased about 69% in the past month.

The surge in active cases at VA echoes a similar increase in cases across the country.

"Trends in new cases generally reflect what is going on in the country and local communities," VA Press Secretary Christina Noel said previously.

Of VA's more than 70,000 cases, about 87% are considered convalescent, meaning they have either recovered or passed the 14-day mark since their last positive test.

VA recorded 3,783 total deaths, including 58 staff deaths from the coronavirus so far during the pandemic. Seven months since VA recorded its first veteran lost to the virus the department has averaged about 17 patient deaths per day, roughly equivalent to the rate of veteran suicide, according to VA data, which the president, lawmakers and advocates have all referred to as a "crisis" and a "top priority."

So far in October, VA has recorded 347 patient deaths and two staff deaths. At that rate, the department could reach nearly 500 patient deaths by November.

VA's mortality rate is influenced by the age and overall health of its patients, who tend to be older and less healthy than the overall American population. VA's data also includes its staff and some non-veteran patients the department has treated as part of its Fourth Mission. The department cares for a total of more than 9 million veterans, roughly half of the veterans in the United States.

The number of patients at the department who require hospitalization has consistently fallen since a height of 38% in March, reaching about 13% in early October, Noel said.

But those numbers also appear to be rising in recent weeks. In the latest of VA's weekly pandemic response reports for Oct. 13-19, the department recorded 445 COVID-19 inpatients, a nearly 30% increase over the past several weeks.

Total cases among VA staff earlier this week surpassed 6,000, with 58 staff deaths attributed to the virus. Active cases are growing steadily among VA employees, too, rising about 16% in the last week. The department employs nearly 400,000 workers, adding more than 55,000 new hires, including 10,436 registered nurses and nurse practitioners during the pandemic.

The North Chicago VA Healthcare System has recorded nearly 2,000 confirmed COVID-19 cases during the pandemic. Of the 141 VA health systems the department is tracking in its publicly available data, at least 18 have recorded more than 1,000 confirmed cases, up from 17 last week.

In August, VA Secretary Robert Wilkie echoed what Veterans Health Administration leaders had been saying for months -- the department was preparing for a potential second wave, or "boomerang" of the virus this fall and winter, stocking supplies and preparing for some patients who may have long recovery times.

VA recorded 820,709 total COVID-19 tests administered nationwide during the pandemic. That total number of tests does not reflect how many individual people have been tested at VA, but rather how many tests have been administered -- some people may receive multiple tests. In September, VA averaged about 4,790 COVID-19 tests per day.

Some veterans have been more affected by COVID-19 than others.