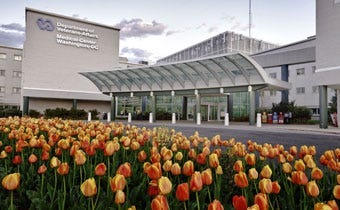 Department of Veterans Affairs Secretary Robert Wilkie said he wants to work with investigators to review the case of a Navy veteran and senior Congressional advisor who said she was sexually assaulted at a VA hospital.

Last fall, Andrea Goldstein, a Naval intelligence officer now serving in the Reserves, said she was sexually assaulted and harassed at the Washington, D.C. VA Medical Center on Sept. 20.

On Wednesday, Wilkie told reporters at the National Press Club in Washington that he was "not satisfied" with the "resolution" Goldstein's case and said he was working with the Office of the Inspector General to re-examine the case.

"I have to know, she has to know, if our facilities are safe," Wilkie said. "That is why I met with the IG yesterday. We're going to make a renewed push to get answers -- not to divulge any confidential information, but to help us help ourselves and help women veterans to make sure that they feel safe and welcomed."

The Office of the Inspector General told Connecting Vets Wednesday that the investigation is closed and there are no current plans to reopen it.

"The investigation is closed. We have spoken to all relevant parties and have received all necessary information about the case. We are not working with anyone to seek additional information at this time," the Inspector General's Office said in a statement.

VA spokeswoman Christina Mandreucci told Connecting Vets Wednesday afternoon that Wilkie "is not calling for a reopening of the investigation" but instead is "calling on the independent IG and the U.S. Attorney to provide detailed investigative findings to VA leadership, committee leaders and Ms. Goldstein."

Wilkie's Wednesday comments appear to be a change from a letter he sent to members of Congress related to closing Goldstein's case last month.

Following the investigation, Wilkie announced that no charges would be filed in Goldstein’s case, and called her allegations “unsubstantiated claims.”

Inspector General Michael Missal responded, saying Wilkie's accusation was inaccurate and that he had discussed the case with VA Deputy Secretary James Byrne and VA Chief of Staff Pamela Powers, warning them not to incorrectly characterize the investigation or its conclusion. Missal said Wilkie's letter specifically "inaccurately characterizes the complaint's allegation as 'unsubstantiated.' This is not an accurate description of the results of our investigation."

On Monday, Wikie fired Byrne, his second-in-command, with little explanation, hours after Goldstein’s reaction to Wilkie’s accusation and VA’s handling of her case published on Jezebel.com.

Wilkie and other VA officials this week said Byrne’s dismissal was not related to Goldstein’s case.