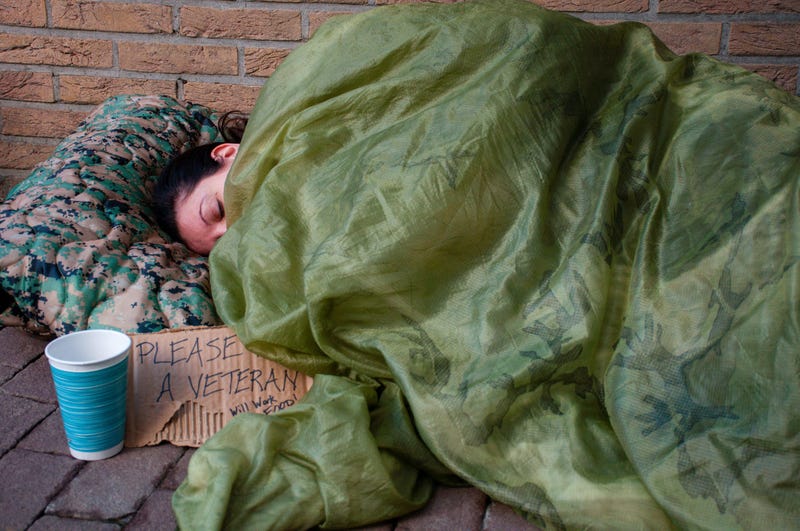 Homeless women veterans may not report their homelessness or seek help out of fear.

“They’re afraid,” said Jas Boothe, founder of Final Salute Inc., an Alexandria, Va.-based organization helping homeless women veterans. “They feel like ‘I can’t tell them I’m homeless because I’ll lose my child.’ So they’re afraid to come forward and have their children stripped from their arms.”

Boothe said changes need to be made so women veterans who are homeless or at risk of becoming homeless don’t live in fear “to have their children ripped away from them.”

Women veterans are the fastest growing group of homeless veterans, according to the Department of Veterans Affairs.

On a single night in January 2017, the U.S. Department of Housing and Urban Development (HUD) estimated that more than 40,000 veterans were homeless, and of those, about 9 percent -- or 3,600, were women. From 2016 to 2017, the number of homeless women veterans increased by 7 percent, compared to 1 percent of male veterans.

And those numbers may be even greater than current data shows, according to women veterans who testified at a Congressional hearing Wednesday.

The House Veterans Affairs Committee subpanel on economic opportunity held a hearing  on the economic wellbeing of women veterans. Homelessness was one of the most common topics, with far-reaching effects.

Witnesses at that hearing, including Boothe, revealed a largely untold story of homeless women veterans.

Many women veterans who are homeless couch surf, Boothe and other witnesses said. Because they are more likely than their male counterparts to be single parents, women veterans find other people’s homes to stay in to avoid being on the street with their children, and avoid the risk of being separated by child services.

But the federal government does not track the number of homeless veterans couch surfing. And women veterans are more hesitant to come forward to seek help because of their children, or because many aid programs and shelters either don’t accept women, children, or place limits on the number and ages of children admitted.

The top factors that contribute to women veteran homelessness are unemployment, 80 percent of women veterans who do not get care at VA, domestic violence and single motherhood, Boothe told members of Congress -- and many of those issues are complicated by a lack of childcare.

More than 2 million women have served in the U.S. military, subpanel Chairman Rep. Mike Levin, D-Calif., said. More than 18,000 women joined the Armed Forces each year. They’re the fastest growing group in the military -- expected to comprise 10 percent by 2020 and 15 percent by 2035, he said.

But while women veterans outpace their male counterparts, and female civilians, in many ways, the rate of women veteran homelessness has more than doubled since 2006.

“It’s heartbreaking to hear stories of women veterans, especially single mothers, fall into poverty and homelessness after separation (from the military),” ranking member Rep. Gus Bilirakis, R-Fla., said. “No one who has served this country should struggle … to provide for their families.”

Women veterans take, on average, three months longer than male veterans to find employment after they leave the military and often earn less despite having the same skills enhanced by military service as men, witnesses said. They are more likely to have a lower median income, more likely to be below the poverty threshold and have higher rates of unemployment. All of those things contribute to financial instability and put women veterans at risk of homelessness.

In California, about 60 percent of women veterans said they had experienced some type of housing instability.

Boothe said it’s important to treat health conditions that could be a root cause of instability. But not all VA hospitals and facilities provide or are equipped to provide women-specific care. And many women veterans face “a gauntlet” of sexual harassment once they arrive at the VA that can be traumatizing, especially for survivors of military sexual trauma, domestic abuse or other issues.

“If you’re not mentally, emotionally and physically well” women veterans often have trouble finding and keeping jobs, Boothe said. “We have to work from the inside out and focus on root causes.”

Childcare is also a large barrier for women veterans and not only for while they work, but also while they go to VA appointments, witnesses said.

The resources just aren’t there to adequately help women veterans, witnesses said. And much of that is hampered by incomplete data decisions often are based on.

“It makes this very small population even more invisible,” Boothe said. “The federal definition of homelessness is exclusionary to women veterans and those with families by design … That (smaller, incomplete) number becomes gospel … They don’t put a lot of funding, resources and effort in because it seems like a smaller problem and it doens’t look like a big deal.”

Levin pledged to witnesses Tuesday that he and the committee would work to help women veterans who fear losing their children if they seek help.

“We’re barely scratching the surface,” he said. “But I want to commit to find out how to address that legislatively or otherwise.”

Want to get more connected to the stories and resources Connecting Vets has to offer? Click here to sign up for our weekly newsletter.
Follow Abbie Bennett, @AbbieRBennett

The VA’s motto is a Lincoln quote that doesn’t include women. This bill would change it.