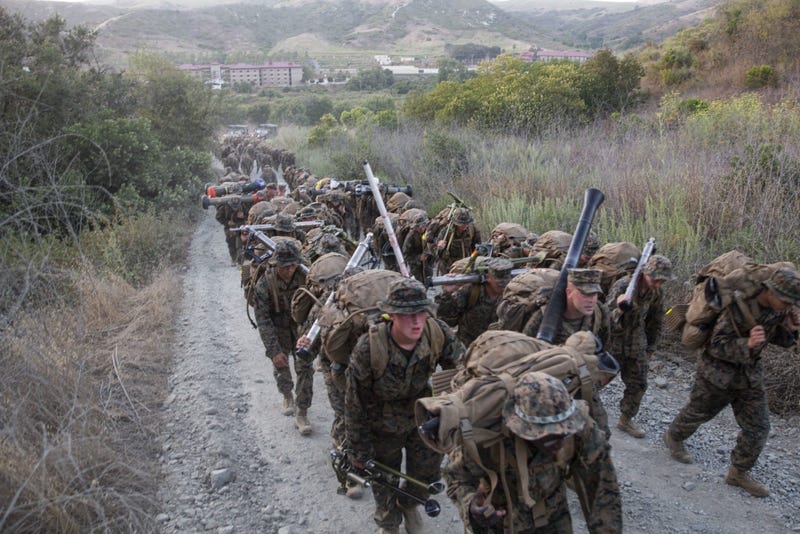 The Marine Corps is set to dissolve three infantry Military Occupational Specialities (MOS) and combine them into one "commando" MOS that can do it all, according to a Marine combat instructor briefed on the upcoming changes.

"They are giving us new protocols and class information," he described.

The shift signifies big changes for the Marine Corps and how it fights wars. Currently, rifleman (0311), machine gunner (0331), and mortarman (0341) are separate MOS's but will be combined some time next year into a designation that at the moment is simply being called 03XX.

A current combat instructor who spoke to Connecting Vets on the condition of anonymity described their approach as borrowing from the land warfare proficiencies of Army Rangers combined with the maritime capabilities of the British Royal Marines.

"They even want everyone to qualify on the Royal Marines infantry fitness test, on top of the Marine Corps fitness test," the instructor said.

After completing their infantry training, these Marines will then be subjected to a series of training courses that were never available during initial entry training before.

These courses include Mountain Leader, Raid Leader, Assault Climber, and Combat Hunter before receiving Scout-Swimmer training and attending the coxswain course. Finally, Marine Infantrymen will attend some version of the Air Assault course, although the details have yet to be determined.

In all, Marine Infantrymen will receive four months of training before being sent to their unit.

The changes elicit a mixture of feelings from enlisted Marines. Some see it as a needed change, while others feel that they will be burning out young Marines before they ever get to their unit by trying to create a training pipeline similar to what the 75th Ranger Regiment has.

"I guess everyone wants to be special now," one Special Forces veteran remarked about the proposed changes.