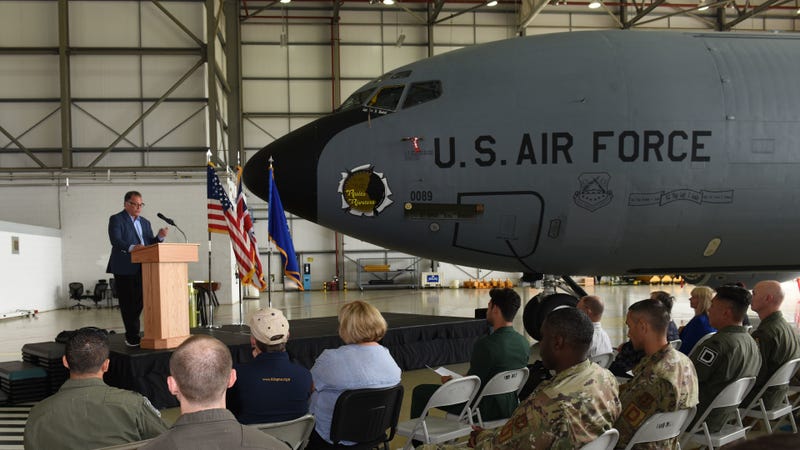 One of the 100th Bombardment Group’s most iconic World War II pilots has been immortalized into the newest heritage nose art of a 100th Air Refueling Wing KC-135 Stratotanker – tail number 58-0089 – which was unveiled at a ceremony at RAF Mildenhall June 10, 2021.

The “Rosie’s Riveters” nose art was created to honor Lt. Col. Robert “Rosie” Rosenthal, a legendary pilot assigned to the 418th Bomb Squadron of the 100th Bomb Group from September 1943 to September 1944 at Thorpe Abbotts, Diss, England. Rosie first became part of the 100th ARW heritage when the 100th Operations Group auditorium was renamed the Rosenthal Auditorium in May 2012.

In addition to the unveiling ceremony of the nose art, the “Rosie’s Riveters” jet was also officially taken on by the 100th Maintenance Group as part of the “Adopt-a-Jet” program, as the historical affiliation of “Rosie’s Riveters” made them a natural fit. The aim of the program is to give Airmen the opportunity to learn more about the specific ancestry behind the aircraft nose art.

Enabling squadrons to have a stronger link to the RAF Mildenhall mission is a way of introducing Airmen to the 100th BG and strengthening the ties to the 100th ARW’s heritage. 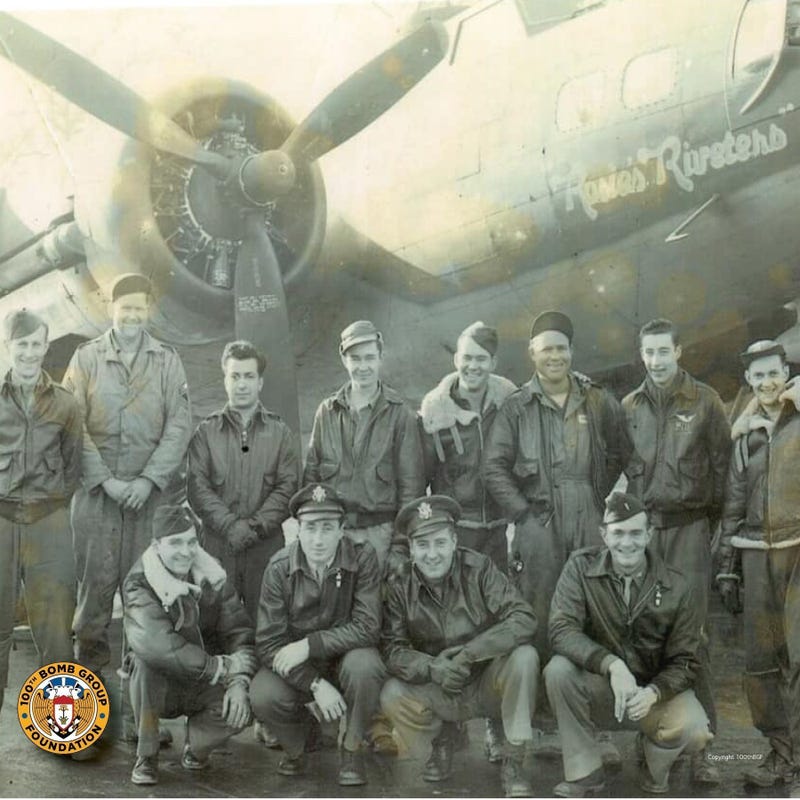 U.S. Army Air Forces Lt. Col. Robert “Rosie” Rosenthal, kneeling, second left, and his air and ground crew pose for a photo in 1944, at Thorpe Abbotts, Diss, England, in front of the original “Rosie’s Riveters” B-17 Flying Fortress. Rosie, a legendary pilot during World War II, led every one of the 52 missions he flew from Thorpe Abbotts. Photo credit 100th Bomb Group Foundation/DVIDS

Rosie signed up to join the U.S. Army Air Forces in December 1941 – the day after the attack on Pearl Harbor – and immediately knew he wanted to be a bomber pilot. He started his military career as a lieutenant, eventually working his way up to lieutenant colonel. After completing his pilot training, he was sent to England and became part of the Eighth Air Force and the 100th BG. He was also one of the oldest there, having been to law school prior to the war, and had worked as an attorney for one of the largest law firms in New York City.

RAF Mildenhall was honored to host a visit from Dan and Sam Rosenthal, Rosie’s son and grandson, for the unveiling and dedication ceremony, where Dan once again saw the base pay tribute to his father.

“What made my dad a great leader was his ability to listen and learn from others, and to respect all who served on the base,” said Dan. “From the crews who cleaned up the base, to the top brass. He recognized that it took everyone to make the missions possible to succeed. He was a great leader and a great man.”

Sam Rosenthal was 10 when Rosie died, and has grown up learning about the legacy his grandfather left behind.

“He was over here to do a job and he knew that when he was up in the air, he wasn’t only putting his crew in danger, but others,” Sam remarked. “He wanted to complete the mission, whatever it was, otherwise they were just putting themselves in harm’s way, and he hated that. My grandfather wanted and had a need to be successful – he set a very high standard for his crew and did it in a way where people would listen and follow. It wasn’t just he who achieved these missions, it was everyone in the squadron, and that was his belief.”

The nose art adorning KC-135 tail 58-0089 completes the collection of World War II nose art, all based on those from the 100th Bomb Group B-17 Flying Fortresses. 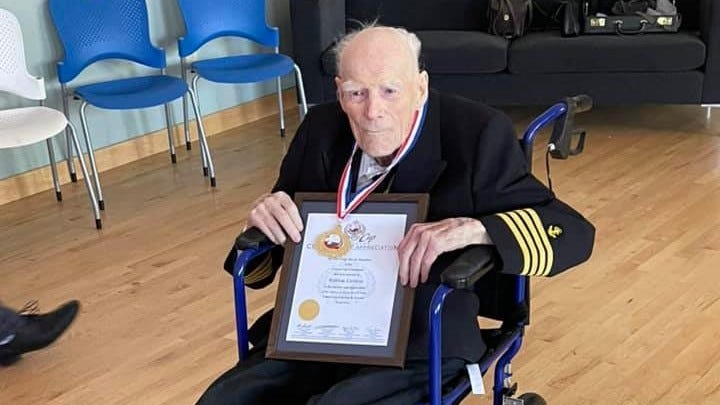 “Bringing ‘Rosie’s Riveters’ back just makes good sense,” said Rob Paley, 100th ARW historian. “Not only is the name iconic for the women who built the aircraft in the war factories back home, but its leader was a legend amongst legends within the 100th Bomb Group itself. Major Harry Crosby, 418th Bomb Squadron and 100th Bomb Group navigator, called Rosie ‘The heart and spirit of the 100th,’ and today the 100th ARW is honoring what he stood for.”

While the 100th MXG already owns and maintains all of RAF Mildenhall’s KC-135s, taking the reins of the Rosie’s Riveters nose art jet, with such legendary and historic ties to its Square D heritage, makes it even more special.

“The 100th MXG is excited by the response the unit sponsorship program has received across the wing, and how much closer it has brought various support agencies to one of our primary mission sets,” said Col. John Tran, 100th MXG commander. “While we at the 100th MXG feels like we’re picking a ‘favorite child’ in sponsoring aircraft 0089, ‘Rosie’s Riveters’, as we support and maintain the entire fleet, we are honored that this is the tail we attached our unit’s name to.”

Tran first learned of Rosie in 2019 when he visited the 100th Bomb Group Memorial Museum at Thorpe Abbotts.

“While there, I read the story about his Oct. 10, 1943, mission over Münster; just his third mission with the 100th BG, and he was the only aircraft to return,” recalled Tran. “I also read about his work to preserve the memory and tradition of the 100th ARW and wondered why his nose art wasn’t amongst the 15 that we flew here in our fleet; this event corrects that oversight, and we’re deeply humbled and proud that we can recognize his leadership and courage, and have his son Dan and grandson Sam as part of it too.” 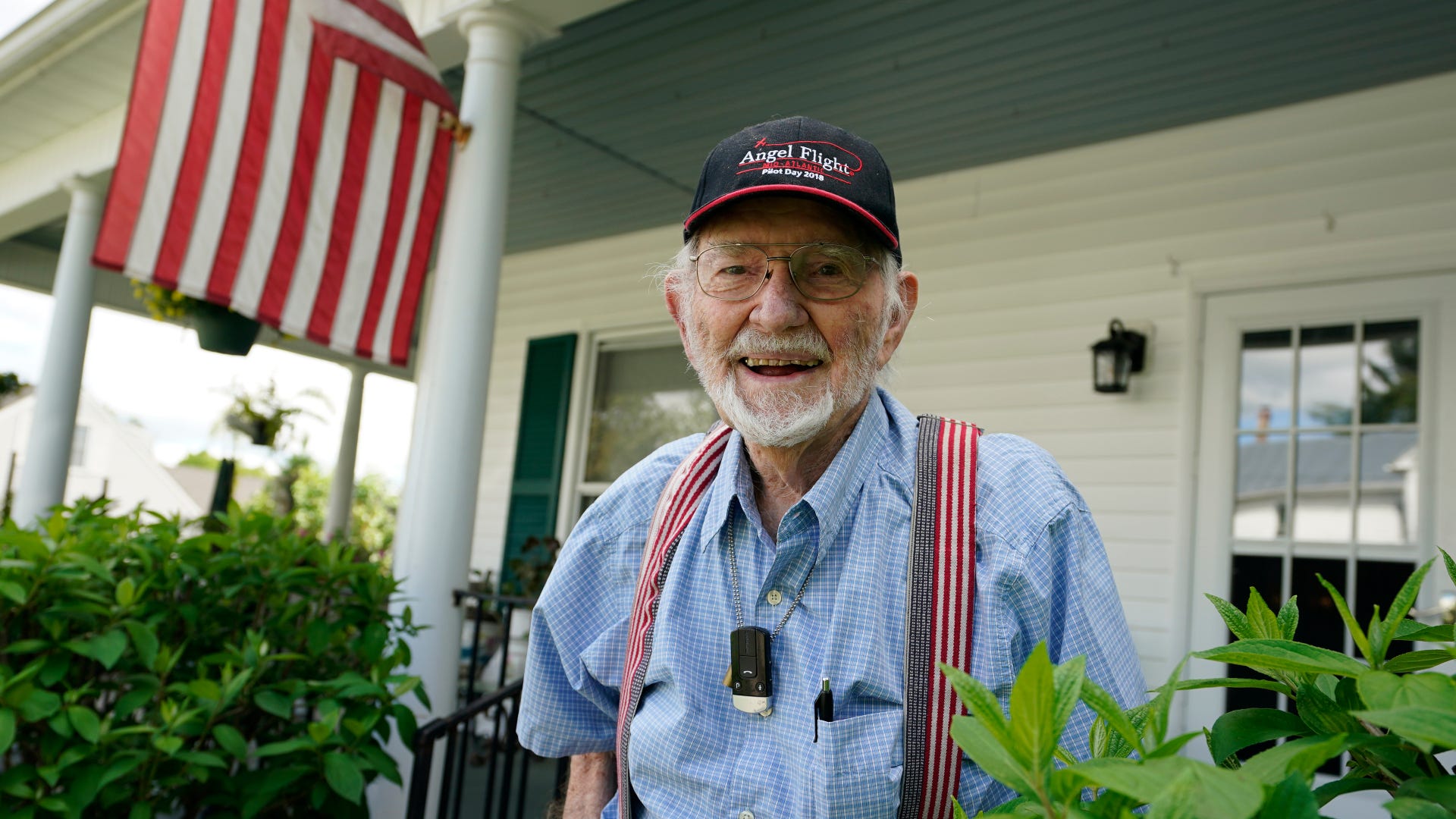 Sam described how it was difficult to deal with the loss of his beloved grandfather, who was such a big part of his life.

“For years it was hard for me to comprehend how the man with the easy laugh, the twinkling eyes, the corny jokes – my best friend during my early years – was no longer around,” he said. “Gone was the man who listened to me prattle on about nothing, who laughed at my ‘knock-knock’ jokes and joined in when I sang rounds of nursery rhymes. More importantly, I distinctly remember how he engaged with everyone – he remembered people’s names and names of their family members. Everyone wanted to be around him, and when they did, I’d grab his hand – because he belonged to me. He was MY grandpa!”

Sam told how Rosie never spoke of his own achievements, and Sam learned about them not only from his dad, but also from those whose lives his grandfather touched.

“When I was old enough to search ‘Robert Rosenthal’ online, from the articles I read about him it was initially hard for me to reconcile the funny, loveable grandpa with the storied man profiled on the page. But it didn’t take me long to see how the t