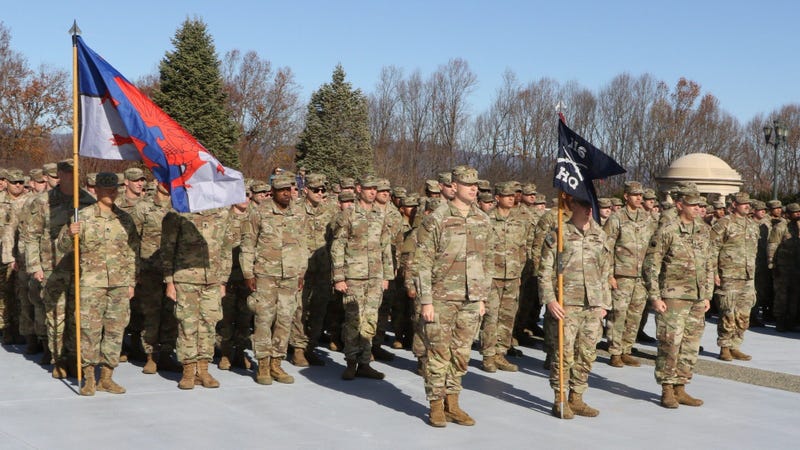 Virginia units from Bedford, Charlottesville, Lexington, Pulaski and Suffolk and a Kentucky unit from Somerset, Kentucky, are mobilizing as Task Force Red Dragon under the command of the Lynchburg-based 1st Battalion, 116th Infantry Regiment, 116th Infantry Brigade Combat Team. They will provide security in support of Combined Joint Task Force — Horn of Africa in the largest VNG single-unit mobilization since World War II.

“I am so proud to have served as your commander-in-chief,” said Gov. Ralph Northam at the departure ceremony at the National D-Day Memorial in Bedford. “On behalf of a grateful Commonwealth of Virginia, I say thank you.”

The National D-Day Memorial was chosen as the site of the departure ceremony because of the 116th Infantry Regiment’s connection to the memorial honoring those who fought and died in one of the most significant battles in U.S. history. When the 116th was activated as part of the 29th Infantry Division on Feb. 3, 1941, many Virginia communities provided Soldiers to serve in the division. Bedford provided Soldiers to serve in Company A, 116th Infantry Regiment, 29th Infantry Division. 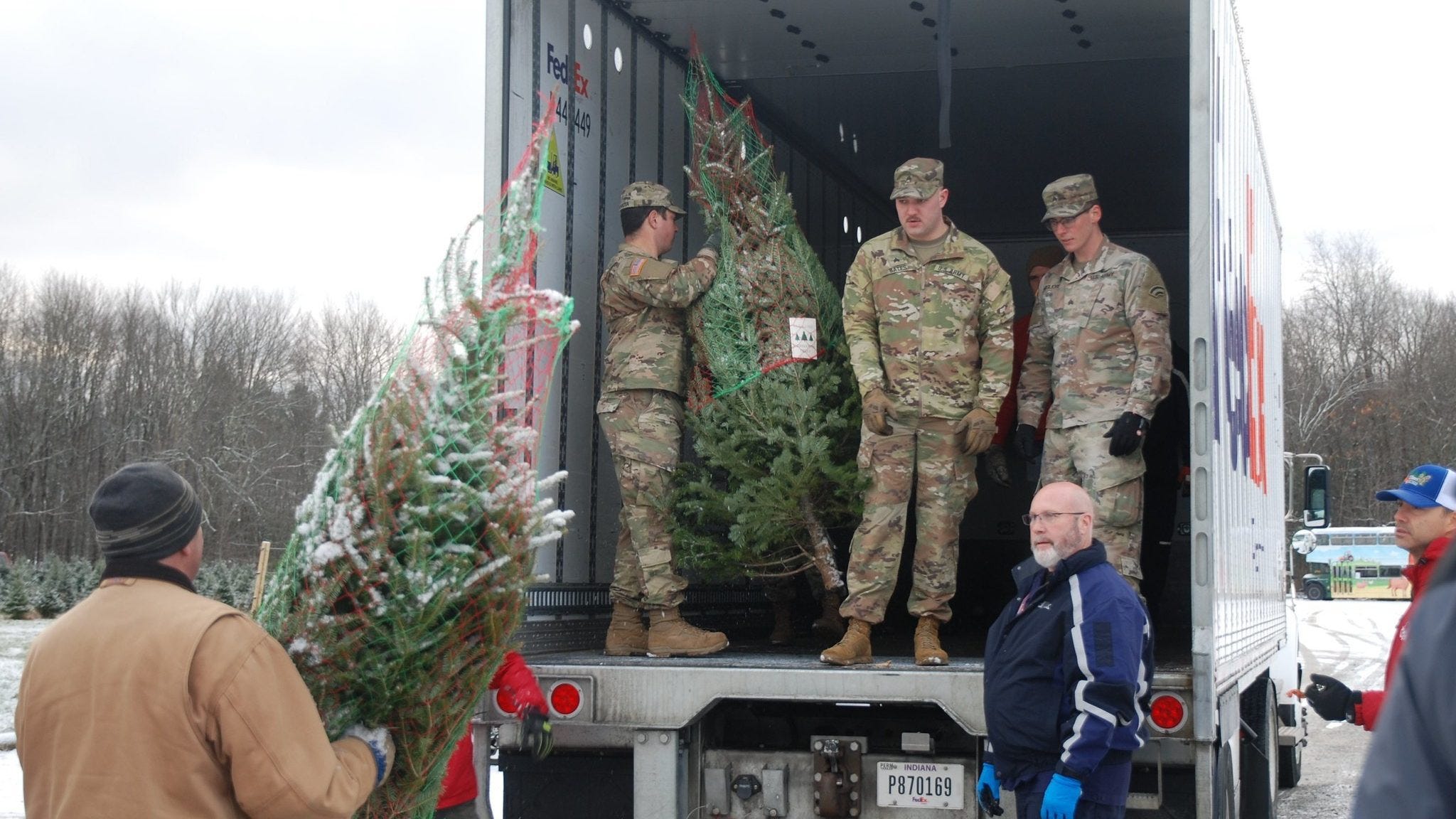 During the assault on Omaha Beach, 19 of the “Bedford Boys” of Company A died. Bedford’s population in 1944 was about 3,200, and proportionally the Bedford community suffered the nation’s most severe D-Day loss. Recognizing that Bedford represented both large and small communities whose Citizen-Soldiers served on D-Day, Congress warranted the establishment of the National D-Day Memorial in Bedford.

“It’s important to recognize that you are a great and storied unit in our Army,” said Maj. Gen. Timothy P. Williams, the adjutant general of Virginia. “You’re well-trained and well-led, and we have every confidence that you will be very successful in your deployment to the African continent.”

He shared perspectives about the history of the 29th Infantry Division based on a recent personal visit to Normandy, France. During the trip, he shared time with the mayors of Saint Jean de Savigny and St Mere-Eglise, two locations where 29th ID Soldiers are remembered to this day for helping liberate the towns from Nazi tyranny.

“The actions of your forebears in June of 1944 are as important today as they were 77 years ago,” he said. “When the mayors think of the 29th Infantry Division, they think of liberation. Your patch is a visceral reminder of the hard-won victories and can be used as a lens to view our history from World War I to World War II to the Balkans as well as Iraq and Afghanistan.”

Williams asked the Soldiers to think for a few moments about that historical connection and take note of the impact that “29ers” have had.

“While we refer to our World War II veterans as the ‘Greatest Generation,’ I would argue that your generation has faced a different set of challenges and set an example of greatness for the future to honor in the way we remember the brave men and women who liberated Europe and secured victory in the Pacific. It’s now your mission to carry the torch of liberty.”

Williams recognized families and employers as two key groups supporting the Soldiers, and he stressed that unit and state family readiness groups are available to assist if needed.

Tierney told his Soldiers the departure ceremony was a reminder they are part of something larger than themselves. He touched on the unit’s history from the allied invasion of Normandy through mobilizations in Kosovo, Afghanistan and Iraq, supporting local, state and federal authorities in Virginia, and the significance of the ceremony at the National D-Day Memorial.

“The sacrifices of the 29th Infantry Division and 116th Infantry Regiment on Omaha Beach are represented so strongly here at this memorial,” Tierney said. “Those Soldiers wrote one of the most honored chapters in history by securing the beachhead in France. These were ordinary Virginia Guardsmen who stayed true to the values of personal responsibility, duty and honor. Their sacrifice ensured the freedoms our republic has held dear for more than 240 years.”

He said now it is time for the Red Dragons to write the next chapter.

“Execute all missions, no matter how complex or trivial, knowing that you represent those who went before you,” Tierney said. “Maintain the disciplined and aggressive ethos we’ve developed to date. Be the Soldier everyone wants in his or her squad. Be the steadfast NCO that in times of need, all look to for guidance. Be the leader Soldiers want to be led by. Do that, and we will return to Virginia to celebrate our accomplishments.” The Soldiers join the VNG’s Fort Belvoir-based 29th Infantry Division and Virginia Beach-based 329th Regional Support Group serving on federal active duty in the Middle East. More than 2,000 VNG personnel will be mobilized by January, the most since the Iraq surge in 2007. When you add in National Guard Soldiers from Maryland and Kentucky serving in the 29th Infantry Division, it is the most Soldiers the division has mobilized since 1942.

The battalion is trained and equipped to accomplish a wide range of missions throughout the U.S. Africa Command area of responsibility. Its primary objective is to provide security for the forward operating bases maintained by the Department of Defense to build partnerships with host nations and improve safety and stability in the region.