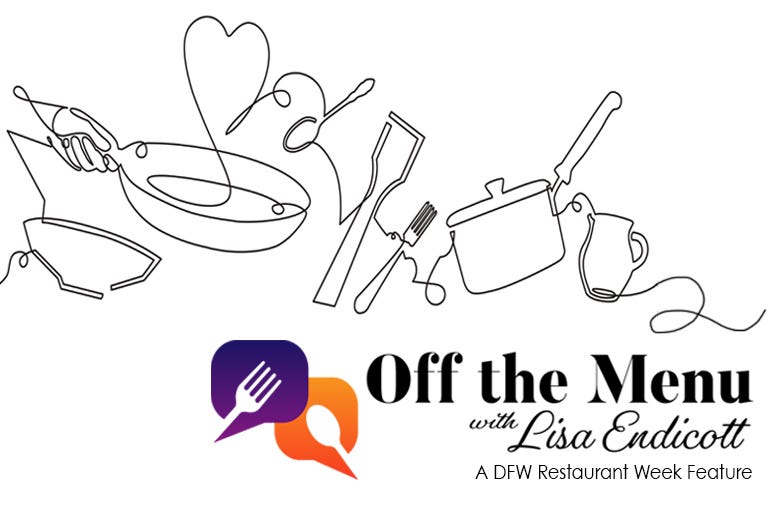 Photo credit Off the Menu

This special, episodic web series, hosted by publicist and former KRLD reporter and producer, Lisa Endicott, captures 25 years of DFW Restaurant Week and Dallas-Fort Worth restaurant history and herstory from those who were a part of it from the beginning and those who are carrying the torch forward. We talk with the legends, icons, and trailblazers in the industry who make up our vibrant culinary arts scene and who love and give back to Dallas-Fort Worth and the dining community in a myriad of ways. We learn not only how to appreciate all facets of hospitality, but we discover new things about these visionaries…the people who influenced them, the events that shaped them, and what lies ahead.

We encourage to listen and also follow us on social media and let us know your favorites and best moments over the past 25 years! Again, thank you for your patronage of the 25th Anniversary of DFW Restaurant Week and supporting our beneficiaries, the North Texas Food Bank and Lena Pope Home.

We dedicate this series to the memory and inspiring work of DFW Restaurant Week Co-Founder and Veteran Broadcaster Jim White.

Episode I - The Dallas Riviera

Chef David Holben's career started in the Midwest and took him to France and then to create the first and longest-running 5-Star restaurant in Dallas. Holben takes people through what The Riviera was like and known for on Lovers Lane and Inwood in Dallas from best dishes, celebrity guests and his experiences with Julia Child. He has been the longest-running executive chef for Del Frisco's Restaurant Group and now is the Senior Executive Chef at the helm of Perry's Steakhouse & Grille who are a part of this year's Restaurant Week. He shares his thoughts on the late Jim White and talks about those he attributes his success to in the industry from his formative years to today.

Global Chef and Restaurateur Richard Sandoval is from Acapulco and grew up in the family business but started out playing tennis and later went to CIA in Hyde Park. He started with one restaurant 30 years ago and now has more than 51 in the world including Toro Toro at The Worthington Renaissance Hotel in Downtown Fort Worth. What he learned from his grandmother and his father he has translated to the guests plates across 4 continents. He talks about how he created his first restaurant and how he did his own interpretation of a Brazilian steakhouse and what a Pan-Latin steakhouse entails, his culture and what makes Toro Toro a social experience. "Toro Toro is Latin cooking without borders." He recommends to all in order to be successful to embrace your heritage. Toro Toro Fort Worth is participating in DFW Restaurant Week from August 4-September 4 for the $49 dinner menu.

A new restaurant is coming to Fort Worth this fall from Jon Bonnell. Chef/Restaurateur Jon Bonnell is born and raised in Fort Worth and has championed its hospitality scene for more than 25 years, including guiding the safety and well-being and communication efforts of the city of Fort Worth during the pandemic. He is a longstanding supporter of DFW Restaurant Week for 21 years. He is the Chef and Founder of Bonnell Restaurant Group which owns Bonnell's Fine Texas Cuisine as well as 4 other restaurants (Waters, Buffalo Bros, catering company, and a new one in the works in Fort Worth. He is a staunch supporter of restaurants and restaurant staff all during the pandemic and was honored by Fort Worth Mayor Betsy Price for his efforts. Learn all the things you didn't know behind this man and big-hearted chef and businessperson including where he sources his food, what he does in his spare time, what gave him his start and much more.

The Stoneleigh's General Manager talks about the history of Beaux-Arts style hotel-The Stoneleigh, which will hit its centennial mark next year, and what is new at the hotel and its restaurant Perle on Maple. She also shares what she has learned as a female leading her teams in the hospitality industry, a career in management and service that spans all the crown jewel hotels in our city from the Adolphus to the Crescent Court to The Stoneleigh and several others. She has worked with Marriott brands, Rosewood, and Benchmark Global Hospitality. Go on an insider tour of the beautiful restaurant, bar and 11th floor of The Stoneleigh with Stacy. Everyone from Elvis, Dan Aykroyd, Audrey Hepburn, Yoko Ono, Oliver Stone, Carol Burnett, Judy Garland, Tom Cruise, Paul Simon, and Frank Lloyd Wright have all stayed and dined at The Stoneleigh. Its restaurant, Perle on Maple is participating in the $24.99 lunch menu and $49 menu during DFW Restaurant Week from August 4-September 4.

Episode V - From Routh Street to Flora Street to the World

In 1983, Stephan Pyles, a young chef from the town of Big Spring, Texas, opened his first restaurant in Uptown called Routh Street Cafe, which would receive 5-Stars and go on to put Dallas on the global culinary map. He had only cooked at The Bronx Restaurant on Cedar Springs before that after studying with some of the great chefs of France. He is one of the founding fathers of Southwestern Cuisine and the first chef from Texas to win the "Best Chef" Southwest Award from James Beard Foundation. He is the founder of Modern Texas Cuisine and won the Nation's Restaurant News MenuMasters Lifetime Achievement Award in 2017, an honor he shares with Jose Andres, Eric Ripert and Daniel Boulud. His last restaurant also achieved 5-stars in the Dallas Arts District-Flora Street Cafe and Fauna, a 14-seat tasting room. Many high-profile chefs had their start or a portion of their formative chef years spent under the tutelage of Stephan Pyles, like Graham Dodds, Matt McCallister, Katherine Clapner, Danyele McPherson, Tim Byres, Misti Norris, Mark Kiffin, Kevin Rathbun, Ben Merritt, Bobby Flay, J.Chastain, and many more. His lifelong mission is to mentor culinary talent and help eradicate hunger. He is the founding board member of Share Our Strength and is the co-founder of DFW Restaurant Week. Chef Pyles is a chef, restaurateur, consultant, cookbook author, TV personality and philanthropist. He traces his career in this episode. He shares his fond memories of food journalist, cookbook author and dining critic Dotty Griffith and DFW Restaurant Co-Founder and KRLD restaurant show host Jim White. Find out what Stephan is up to and where his recent travels and roles are taking him.

Give the people what they want and entertain them...Shannon knows this very well. He is the real deal, as real as they come. Shannon Wynne is a prolific restaurateur and concept king in Dallas and Fort Worth and beyond known for his famous -O ending named restaurants in Highland Park, Lower Greenville and Uptown that began in the 80s. His famous restaurant/bars 8.0, Tango, Nostromo and Rio Room are still part of table talk and restaurant lore today. He is a trendsetter, tastemaker and pioneer in knowing what the people want and keeping his concepts authentic to the areas where they reside and incorporating local influences. Today, his company 8.0 Management operate Flying Fish, Rodeo Goat, Meddlesome Moth, Flying Saucer Draught Emporium, and Miriam's Cocina Latina. What people may not know is that his father started Six Flags Over Texas and other locations of the parks and that he was involved early on in The Stoneleigh P. Did you know that the stained glass windows in Meddlesome Moth came from the original Hard Rock Cafe on McKinney Ave in Dallas? Find out why he doesn't travel too far anymore for inspiration and what he is opening next!

Top Chef Season 7 Contestant and native Texan Chef Tiffany Derry has had confidence from a very early age. She has know-how because she works hard and asks questions and is always learning. At only 38, she is at the helm of a purpose driven company she co-founded called T2D Concepts where she has created Roots Southern Table in Farmers Branch and Roots Chicken Shak in Plano at Legacy Food Hall and Austin. She has also created a line of spices and progressive thought apparel called "Derry Wear" that carry inspirational slogans that resonate with the public and inspire many especially women and young women. Tiffany's mother always told her "Delay doesn't always mean denial" so if at first you don't succeed or you find you can't do what you want to do when you want to do it, to really be persistent for the long haul. She shares that Houston has raised her but Dallas has embraced her and she is grateful. Find out how she got the exciting call for Top Chef, how she started her first restaurant at 26, what to expect from her newest concepts, what she thinks about the industry today and what's coming next for her on TV and in the biz. Everyone needs to sit at the table with Tiffany for her food, wisdom and witness her joy about life!