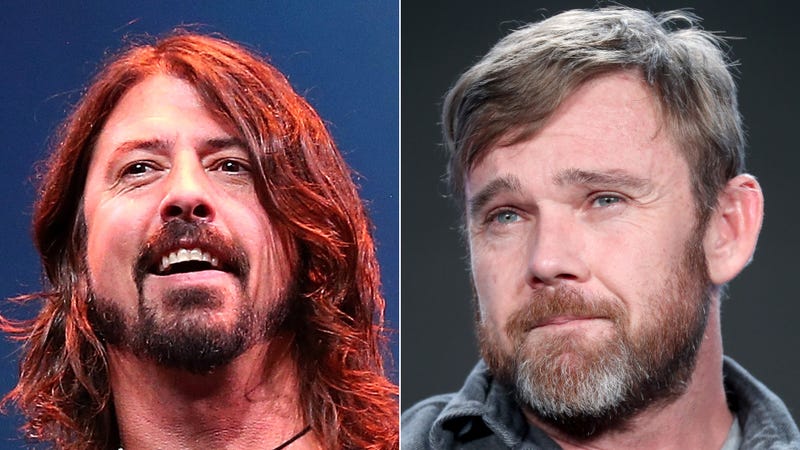 Well, we knew there would be some folks holding signs outside of Foo Fighters concerts during their 26th-anniversary tour -- and here they are.

Following the announcement that the Foos would be performing at New York City's Madison Square Garden for the venue's very first concert since the emergence of the pandemic for a fully vaccinated crowd, some folks voiced their displeasure. Evoking the name of Nirvana's deceased singer while touting conspiracy theories, former child star Ricky Schroeder, best known for his role in the '80s sitcom Silver Spoons, gathered the anti-vax masses to protest the band's limited capacity warmup show in Agoura Hills, CA on Tuesday -- which was also open only to those who could provide proof of vaccination.

"Dave Grohl is an ignorant punk who needs [to be] slapped for supporting Discrimination," Schroeder said on social media regarding the perceived unfairness. "Kurt Cobain is laughing at you Dave along with Millions of Patriots....Wakeup Fool." Schroeder then urged his followers to show up at the group's warm-up concert to "show Dave how we feel this Tuesday night at his Canyon Club show for discriminating against Americans who choose Freedom (NO-Experimental Vax) over Medical Slavery (Sheep)."

Here's what the scene looked like on Tuesday night:

This is what happens when you just want to attend a @foofighters concert at a small local concert hall and the next thing out know you’re a “Vaccine Segregationist”. #FooFighters pic.twitter.com/fyDAZ2QcXn

We knew this was coming... Upon the announcement of the fully-vaccinated MSG show, social media users, including "I'm Too Sexy" stars Right Said Fred, expressed their displeasure with the vaccination status rules. Some stated they would no longer be listening to the band because of their decision to go along with MSG's "devious" plan, while others offered wild "conspiracy theories" about frontman Dave Grohl. There were, of course, plenty of fans who were "totally on board" with required vaccinations at full capacity shows.

For the 600 or so fans who are comfortable with the science behind vaccines, the show was one for the record books. Kicking off at around 9:30PM, the Canyon Club concert went off perfectly, with Dave promising the crowd, "tonight we’re gonna play until the cops get called or I f***ing collapse."

Foo Fighters will recognize their 26 years as a band with a special run of U.S. dates on top of their already scheduled 2021 appearances this year at Lollapalooza, Bonnaroo, and Bottlerock. Tickets are on sale now!