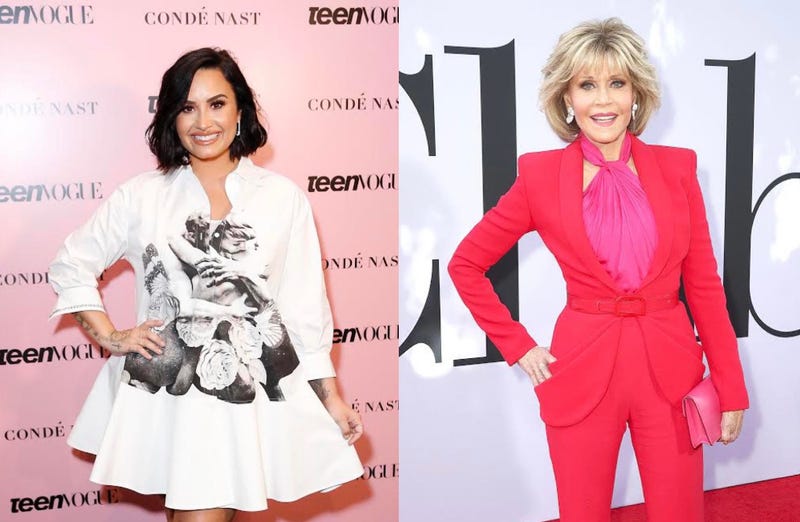 Jane Fonda, the legendary activist and actress wants to share an embrace with Demi Lovato because the Pop icon is rising above societal pressures and standards just by simply living authentically.

Fonda sat down with Demi on 4D With Demi Lovato, available here on the Audacy app, this week and the two spoke using their platforms for a greater purpose. Fonda, who is regarded as a well-achieved activist, became emotional when the “Dancing With The Devil” singer began to open up about finding their way to their identity.

Lovato explains that the construct of the patriarchy is what ultimately lead them to start thinking inwardly. Demi says to Jane, “I loved what you said about the patriarchy being at the pinnacle of the problem for everything else we have on this planet because it really is the truth.”

They continue, “I think that when you oppress so many other people in order for one demographic to rise, there is going to be an imbalance, everywhere.”

The Grace & Frankie star responded to the singer and asked when their realization about patriarchal oppression came into their consciousness. Demi began to explain that their realization was twofold and that it wasn’t until grappling with their own identity did they realize that they could rise above patriarchal standards.

“I think it came in two tiers for me,” says Lovato. “It was going to a friend’s poetry slam show that I identified so profoundly with because they were talking about not conforming to genders and identifying not as male or female.”

Demi explains to Fonda, “when I heard their take on that I identified with it so much that I thought to myself ‘oh, there’s something here. There’s something I’ve never known about my entire life, but it’s clicking now and I need to research this.'"

Having grappled with the idea of gender fluidity for “over a year” and sitting with the possibilities of their identity, Demi was lead to a new way of thinking. They add, “the reasoning behind me cutting my hair off was because I was shedding all of the gender norms that had been placed on me growing up female in this world.”

“I just always found that men were always at the root of pushing their agendas on me… to be a sexy Popstar, to whatever would make other people the most money,” notes Lovato.

As Demi explains this and shares how they found true authenticity, Fonda begins to become notably emotional. However, Lovato goes on to add, “I had to break that mold because I had to find that freedom for myself in order to survive… I came to a really close near-death experience in 2018 and that for me was the wakeup call to start living my life.”

The singer pauses and asks the actress about her emotional response to their profession about authenticity and living their truth. Jane promptly responds, “Well, you know, what you’re saying is so brave, it’s so so brave, I wish I could hug you right now.”

In agreement, Demi also says that they would love to hug Fonda, however, the two realized that they had hugged in the past at a prior protest march.