OAKLAND — Maybe somewhere out there in the cosmos, an alternate A’s universe exists where Matt Olson, Matt Chapman, Marcus Semien and Sean Murphy are all in the same infield. An alternate realm where Chris Bassitt, Sean Manaea and Frankie Montas are still in the rotation.

In reality, the A’s held a press conference Tuesday at Jack London Square in Oakland to introduce Shintaro Fujinami, who signed a one-year, $3.25 million contract. More than 40 reporters and photographers jammed into the A’s team facility due to the immense interest in Japan, where “Fuji” was once viewed as a teenaged rival to Shohei Ohtani. There’s a lot of international hoopla, but not even a guarantee he will make the opening day rotation.

Instead of having a stable full of veteran starters, the A’s are starting all over again. Such is life when tight-fisted John Fisher is your owner.

A’s general manager David Forst said one or two more minor moves could come before spring training, but added, “I think we’ve done most of our work.”

Compared to last season, when they shelled out a whopping $1.7 million combined to bring back Jed Lowrie and Stephen Vogt for farewell tours, the A’s are looking spendy. But Oakland still ranks dead last in estimated 26-man Opening Day payroll, according to Cot’s Baseball Contracts, with a figure of $52.3 million.

By comparison, the New York Mets are leading the league with a $345.9 million payroll and that’s before the competitive balance tax. Owner Steve Cohen is also shelling out a projected $93.7 million in luxury taxes alone.

The A’s also find themselves in one of the most financially competitive divisions in MLB, as the AL West is the only division besides the stacked NL East to have three of the top 10 payrolls in baseball – with the Angels ($201.5 million, 7th), Rangers (188.6 million, 9th) and Astros ($187.4 million, 10th).

If only there was a way to make Fisher spend his money.

While the NFL has a hard salary cap, MLB is closer to the NBA's structure. Like the NBA’s luxury tax, MLB’s competitive balance tax (CBT) threshold of $233 million is supposed to be a guardrail to promote competitive spending among franchises. You go above that? You gotta pay for it.  As we’ve seen with Warriors ownership in the NBA and Mets ownership in MLB, those glass ceilings can be easily crashed with more cash.

MLB is an outlier in that it doesn’t feature a salary floor for its 30 teams. While the NBA mandates its teams to spend 90 percent of the luxury tax threshold, the NFL features an 89 percent salary cap floor.

During the 2021 round of collective bargaining agreement (CBA) negotiations, the owners reportedly offered to establish a $100 million salary cap floor. But they also stipulated that the CBT threshold be lowered from $210 million to $180 million, which was a no-go for the Players’ Association.

The ratified 2022 CBA, which runs through the 2026 season, also doesn’t include a salary floor, so there is no penalty for Fisher to be so cheap.

Should MLB institute a salary floor during the next round of CBA talks? I asked super agent Scott Boras that question during Tuesday’s press conference with Fujinami.

“David (Forst) and I, I’m sure, have the same view on this,” Boras said with a laugh. “We have historic dynamics in professional sports that probably apply to each sport individually. What I like to see in sport is I like to see intellect operate. I like to see flexibility operate. I think our game, there are ebbs and flows of talent and that you should have an economic structure that allows for the ability of an organization to grow its talent. There are some times where you’re gonna be in a building more, there are other times when you’re going to be in a true championship mode. The more flexibility that an ownership group has, I believe that they have greater ability to optimize and grade the intellect they possess on the operational team.”

That’s a lot of Boras mumbo jumbo, but I really wanted to hear what the GM for baseball’s cheapest team had to say. Forst has been running the show for years in Oakland but is officially the ringleader of baseball operations now that Billy Beane has stepped into an advisory role.

“I would say, as long as I’ve been in the game, we’ve had an economic structure that is determined by the CBA,” Forst said. “We’ve always operated as best we can to put a contending team on the field every year. From my position, we operate on whatever constraints are agreed upon by the commissioner’s office and players’ association. We’ve always done our best under that to contend.”

I understand Forst is in a tough spot. He can’t come out and say, ‘Hell yeah! Make John Fisher double my budget!’ but I pressed him again on the topic. Forst played it safe.

“Honestly, it’s not something we spend time thinking about or have conversations about,” Forst said. “We do what we can with the current structure.”

Again, it’s worth reminding that Oakland’s “structure” is determined by Fisher, not by MLB commissioner Rob Manfred.

In recent years, the A’s have let Semien, closer Liam Hendriks and outfielder Mark Canha walk in free agency while trading away Olson, Chapman, Murphy, Bassitt, Manaea and Montas. Manager Bob Melvin was allowed to join the Padres without compensation. A core in its collective prime. A group of guys who love each other and remain friends. A marketable team that the fans knew and adored.

Now they got Shea Langeliers, Cole Irvin and Tony Kemp. No offense to those guys, but the cache simply isn’t the same. It’s virtually impossible for a casual fan to identify an A’s player these days. Fisher has killed his product ostensibly for profit and Manfred isn’t doing anything to stop it.

Dating back to Steve Schott’s ownership in the mid 1990s, Oakland has been among the bottom of the league when it comes to annual spending. Since Fisher’s group bought the team in 2005, the A’s have never finished higher than 17th in spending, which happened once in 2007. They’ve usually lurked in the bottom five and Fisher has never spent more than $92.2 million (2019) on an opening day payroll. The COVID-shortened 2020 season payroll would have been $95.4 million in a full year, but Fisher only had to pay $35.3 million that year.

This marks the first time the A’s find themselves at the bottom of opening day payroll rankings since 2018 and just the second time overall since Cot’s collected data beginning in 2000. In 2018, the MLB Players Association even filed a grievance against the A’s and three other teams for not spending revenue sharing dollars on salaries.

Imagine if Fisher actually had to spend nine figures on his payroll? What a shame that’d be. Especially considering the A’s will reportedly receive an estimated  $65 million in national TV revenue, $48 million in regional TV revenue and $20 million from MLB’s revenue-sharing agreement.

That’s $133 million in money without even selling a ticket or a jersey or a hot dog. What happens with that extra $81 million after you pay for your 26-man roster?

“The idea of revenue sharing is not to make money, it’s to field a competitive team,” an anonymous MLB owner told Jon Heyman at the owner’s meetings last June. “That money is supposed to go toward player salaries. They took the money and put it in their pocket.”

The A’s will tell you they can’t field a financially competitive team until they get revenue from a new stadium, but there’s $133 million that says otherwise.

For the next four seasons – at least – there’s no reason to think Fisher won’t try to run a tight ship and skimp on player salaries. The Howard Terminal new stadium project has dragged on for years and is in a holding pattern as Oakland’s newly-elected mayor Sheng Thao and city council get acclimated.

It doesn’t have to be this way. According to GoBankingRates.com’s incomplete list of 22 MLB owners in 2022, Fisher ranked 12th with a net worth of $2.5 billion. Perhaps Fisher’s finances are reeling a bit as his family fortune from Gap Inc. clothing, whose stock has dipped below $13/share recently after trading at nearly $36/share in May 2021. Kanye West’s blow up with GAP last year messing with A’s finances? Could be!

Back in 2021, A’s president Dave Kaval also repeatedly told reporters that the franchise had spent more than $200 million behind the scenes trying to get a new ballpark done. That figure seems suspiciously large, but you have to wonder if Fisher’s money is going to Howard Terminal rather than his current on-field product, too.

The new stadium situation remains the biggest hurdle for the franchise to overcome. There is a natural deadline for the A’s to figure out their stadium future, however, as the franchise will be removed from MLB’s revenue-sharing agreement if they don’t have a solution by the early 2024.

The biggest holdup with the current stadium development deal is who is gonna fork over the bill for the off-site infrastructure. The City of Oakland was recently denied $183 million in federal funds that could have aided the project, but reportedly have already acquired $321 million in grants and are eyeing $140 million more in grants from regional ($55 million), state ($60 million) and federal ($25 million) sources.

To think, none of these headaches might have even happened if former MLB commissioner Bud Selig didn’t work out a sweetheart deal for his fraternity brother Lew Wolff, who purchased the team with Fisher in 2005.

Warriors owner Joe Lacob told the San Francisco Chronicle’s John Shea that he made an offer to Schott to buy the A’s for $180 million. Lacob waited four days to hear back from Selig, who in the meantime ran the terms by Wolff, and secured the franchise with his approval.

To this day, Lacob said he has an offer to buy the A’s from Fisher, who now controls 90 percent of the team after buying Wolff’s 10 percent share in 2016. The A’s are valued at $1.18 billion according to Forbes.

“I’ve had a standing offer to buy the A’s from John Fisher for I don’t even know how long,” Lacob told Shea. “Over a decade. It’s up to him; it’s his business. It would have been smarter to sell to me a long time ago because we would have been partners and he would have been able to own a part of the Warriors as well. I tried to tell him that. I would have done a ratio deal. You’ve seen the increase in value we’ve created by building a stadium and building the business. I do think it’s sad that we didn’t get the A’s over any time in the last 17 years. I think we would’ve done a really good job with the A’s. But look, obviously I’m biased.”

In the 13 years since Lacob bought the Warriors, they have vaulted from a wart franchise to becoming the NBA’s most valuable, worth more than $7.6 billion, and built Chase Center in downtown San Francisco. Lacob recently told The Athletic’s Tim Kawakami he’s interested in buying the Angels, who are up for sale from Arte Moreno. Lacob used to vend peanuts at Angels Stadium for seven years in his youth so he has an emotional connection with the franchise. But if he buys the Angels, A’s fans can kiss any wishes of Lacob’s Light Years energy going to Oakland.

We’ll have to see how Lacob’s pursuit with the Angels pans out, but it’s still fun to think about isn't it – Lacob lavishly spending on the A’s? Now that’s just another alternate universe for Oakland fans to live in. 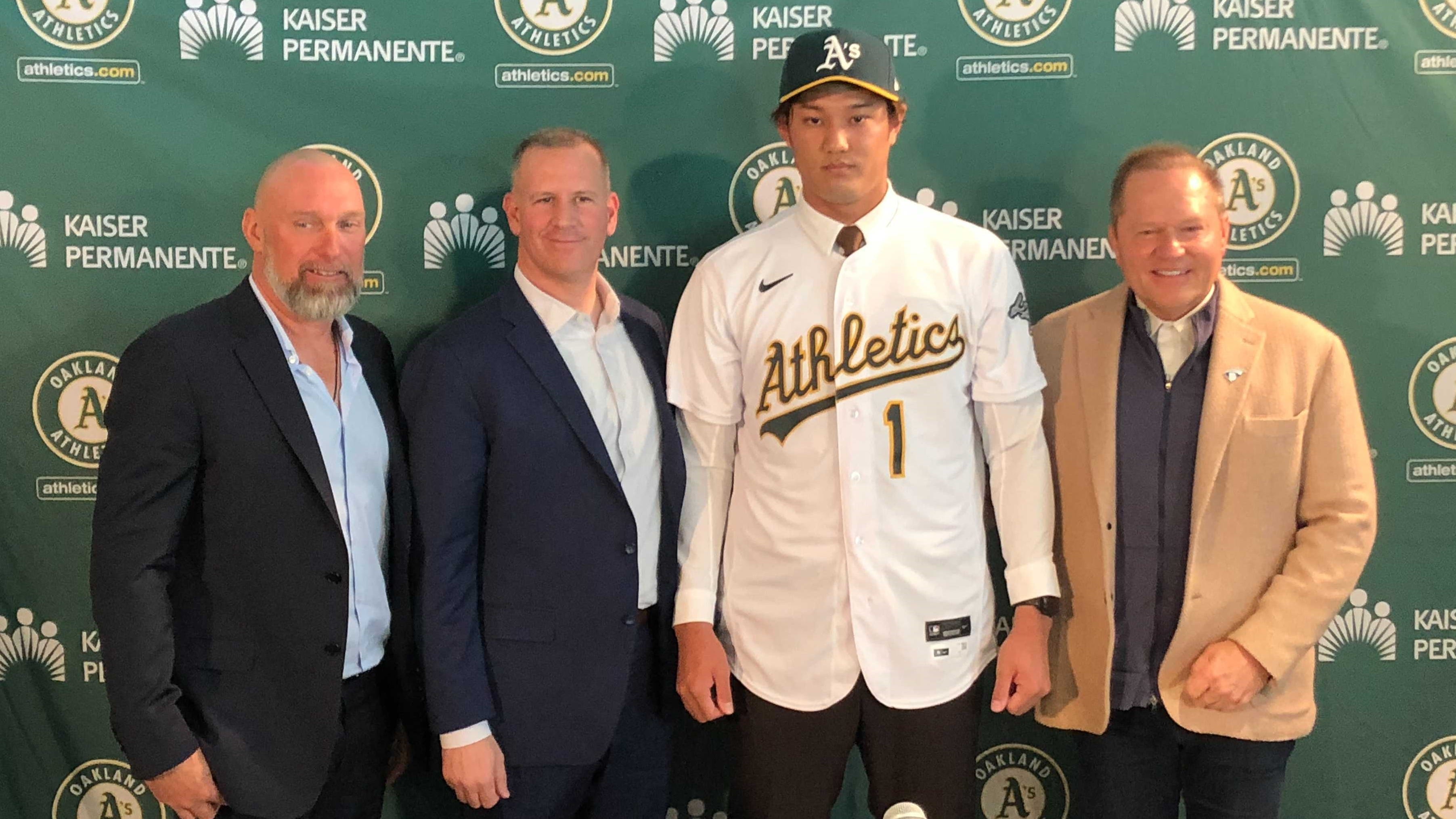