Week 1 is less than four months away, football fans.

The NFL released the 2022 schedule on Thursday night, with the 49ers using a dark and moody social media video to unveil their slate, while other teams went full-on Hollywood.

Here’s a game-by-game breakdown of what to expect from the 2022 49ers schedule.

Will Jimmy Garoppolo start in front of his family and friends for the 49ers? Will he be on the sidelines holding a clipboard for Trey Lance? Will he be playing for another squad by Week 1? Last year, Garoppolo helped turn the season around with a solid performance at Soldier Field, but the 49ers reportedly want to trade him by training camp.

Russell Wilson and the … wait … Drew Lock and the hated Seahawks will be the 49ers’ first home opponent for 2022. It will mark the first time since 2011 – Jim Harbaugh’s first year as coach – that Wilson won’t be under center for the Seahawks following his trade to the Denver Broncos. That’d be wild if Jimmy G got traded to Seattle, wouldn’t it?

OK, now the 49ers are ready to play Russell Wilson. The schedule makers didn’t wait long to pit Wilson against the Niners and it will be San Francisco’s first primetime game of the year, no less.

Dun-dun-dun-dun! ‘Monday Night Football’ will return to Santa Clara in Week 4 in a rematch of the NFC Championship Game. It’s always a spectacle when Kyle Shanahan faces Sean McVay.

This is the first game of the year where it feels like, meh. The Panthers aren’t expected to do much this season and there’s some uncertainty under center with Sam Darnold.

Here’s another game without much oomph. It will be weird to watch the Falcons without Matt Ryan, who was traded to the Indianapolis Colts this offseason. Marcus Mariota is set to take over the starting job in the ATL.

These two franchises will forever be connected by Super Bowl 54, when Patrick Mahomes and the Chiefs scored 21 points in the fourth quarter to claim a 31-20 victory.

Levi’s South should be loud for this Halloween weekend matchup. Last season, 49ers Faithful took over SoFi Stadium for Week 18 and the NFC title game.

Ideal time for a bye week – right in the middle of the grueling 18-week season.

Another primetime game at Levi’s Stadium. The Chargers unveiled their schedule with a ridiculously over-produced, but awesome anime video. That Justin Herbert guy is pretty good, too.

This Monday Night affair should be a special one, as the NFC West foes will square off in Mexico City. Playing in D.F. brings its challenges – like the altitude and possibility of pollution.

The 49ers will have a short six-day turnaround after their game in Mexico City. The Saints are in rebuild mode following the departure of longtime coach Sean Payton.

New Dolphins head coach Mike McDaniel is sure to get a warm welcome from the 49ers organization for this game in Santa Clara. The former 49ers offensive coordinator has poached some talent from San Francisco while building his first NFL coaching staff.

This will be a big one. Tom Brady’s career could be winding down (again) and this will likely mark his last trip to the Bay Area as an NFL player, barring a playoff matchup. Brady, of course, grew up in nearby San Mateo.

Winning in Seattle is never easy, no matter the teams’ records. This will be the 49ers’ lone Thursday night matchup of the season.

Tell Santa Claus, because Santa Clara will be the site of a game on Christmas Eve.

This will be quite a doozy. Fans (and security guards/police) could be getting quite busy for this New Year’s Day matchup between former Bay Area rivals in Sin City.

Per usual, the NFL will wrap up the regular season with divisional matchups across the board. Will this finale help determine the fate of the NFC West? 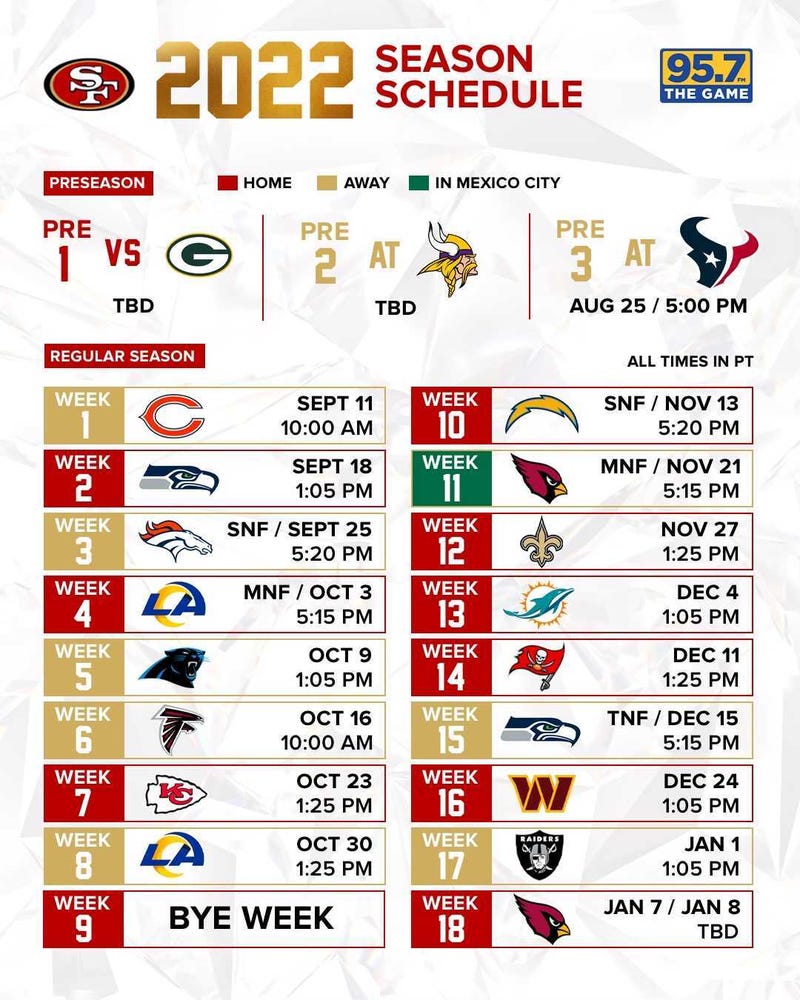 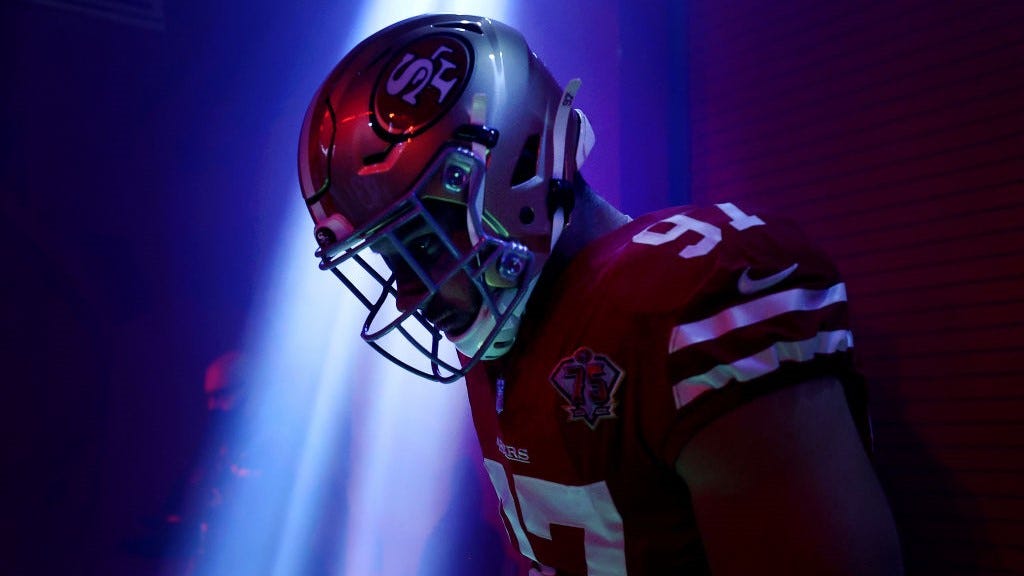