After making the tackle on the final (bizarre) play by the Dallas Cowboys in Sunday’s NFC Divisional Round matchup to wrap up a 19-12 49ers victory, the 49ers safety made his way down to the south end zone for Levi’s Leap. He jumped atop a short wall and put up his hands in exultation. 49ers wide receiver Brandon Aiyuk jumped up there too as they punched their ticket to the NFC Championship.

Ward and the Niners defense proved they are still elite in Sunday’s win, as the two first-half picks set the tone for a dominant effort against a quality Cowboys offense. So there’s no reason why he shouldn’t have been doing a little Jimmie Shimmy with fellow safety Talanoa Hufanga after the big victory.

Jimmie Ward was fired up after the game-ending tackle pic.twitter.com/DwMTDjtuE2

“We just feed off each other’s energy,” Ward said.

While most outsiders expected a shootout in Santa Clara, Sunday’s contest turned into a gritty and grimy one. Neither team had much success sustaining drives as the talented defenses from both sides controlled the tempo of the game. Ultimately, the ballhawking 49ers were too much for Dak Prescott to handle.

Likewise, many expected Prescott’s turnover-prone ways to show up on Sunday. And they did. It didn’t take long for the 49ers to get their first takeaway. About nine minutes into the contest, cornerback Deommodore Lenoir jumped a route and came down with an easy pick.

Lenoir comes away with the pick 🙌pic.twitter.com/7nmMav7U35

“I broke on the route and I really didn’t think he was gonna throw it,” Lenoir said. “I thought it was gonna be a scramble drill. But then when I looked back, the ball was coming. My hyena senses kicked in and I just jumped for it.”

Entering the game, questions swirled about San Francisco’s secondary. Ever since Emmanuel Moseley went down with a season-ending ACL injury in Week 5, Lenoir has been in the starting lineup. Many have pointed to Lenoir as the weak link on the San Francisco defense and the 23-year-old heard all the noise. Instead of shrinking from the unwanted attention, Lenoir used it as fuel.

“I’m the youngest guy on the defense, besides (Hufanga),” Lenoir said. “But I expected that. I embrace it. They wanna come at me, I’m gonna make ‘em pay.”

According to Ward, Lenoir’s early interception set the tone.

“Really, I fed off D-Mo, man,” Ward said. “D-Mo made the first big play by catching that pick.”

The Niners’ second-interception was also a game-changer. The Cowboys were charging down the field in the two-minute drill in the first half with a slim 9-6 lead trying to add on more. But then Dak threw an ill-advised pass to his left side, as Ward dove to the ground and batted the ball up right into linebacker Fred Warner’s hands.

The Niners pick off another one from Dak 😤pic.twitter.com/MkbbxhTHsf

San Francisco was able to get a field goal on the other end as time expired in the first half, before the defense allowed just three more Cowboys points the rest of the way. And Warner got a nice prize for his stellar evening of work, as he was all over the place for the Niners.

Whether he was in the backfield making a tackle or streaking down field to cover a receiver, Warner made a massive impression on Sunday’s game. Perhaps his most notable sequence came in the third quarter, when he initially lined up over center on a pass play before dropping back deftly more than 30 yards to break up a pass on Cowboys star receiver CeeDee Lamb.

How many linebackers are doing what @Fred_Warner is doing?

Not too many – if any – other NFL linebackers have the dexterity and guile to keep up with Lamb, who led all receivers with 10 catches and 117 yards. Yet, there was Warner, showing off why he was a first-team All-Pro this season. In all, he finished with a team-high nine tackles on Sunday.

Still, the Cowboys had a slim chance to tie the game in the final minute, as they needed to drive 94 yards in 45 seconds. Until they busted out a weird trick play on the last snap of the game that featured Ezekiel Elliott at center and offensive linemen spread out wide. Once Prescott delivered a high pass to explosive return man KaVontae Turpin, who was lined up in the slot, Ward put his head down like a heat-seeking missile and made the tackle. Then he kept on running.

THIS DEFENSE IS DIFFERENT.

“The plays that he’s able to make on special teams, I knew I couldn’t give him space,” Ward said. “He threw it and he threw it high. And I’m fast, so it gave me enough time to hit him.”

While the 49ers defense looked invincible throughout the first three months of the season, it has looked a bit more beatable to end the regular season – the Week 17 37-34 overtime victory against the Las Vegas Raiders comes to mind. But after limiting Prescott to 180 yards, a touchdown and two picks, and the Cowboys’ rushing attack to just 3.5 yards per carry, the Niners ‘D’ proved its still elite.

“We’re the best team, the best defense in the NFL,” Lenoir said. “We’ve been that way since Week 1.” 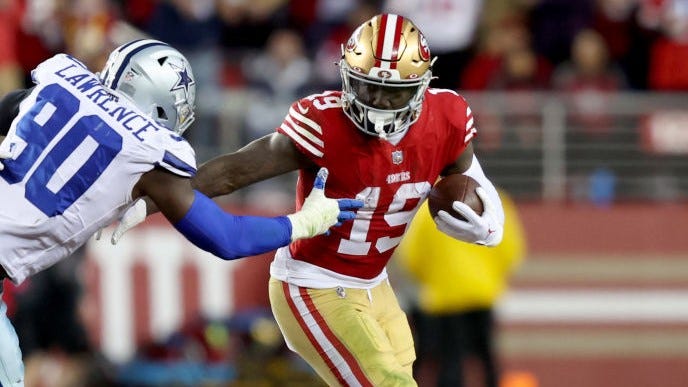