SANTA CLARA — The Niners did it again. For the second straight year, the 49ers ended the Cowboys season.

Sunday night’s matchup carried decades of history between the two storied franchises and it turned out to be a tight one once again. Even though Brock Purdy looked human and the Niners struggled to run the ball, San Francisco’s defense stood stout and keyed a 19-12 victory in front of a wild crowd at Levi’s Stadium.

"To see the clock hit zero and you see the Niners over the Cowboys, that’s pretty sweet." Purdy said.

The 49ers figured they might have a chance to cause some turnovers with Dak Prescott and they were right, getting two first-half interceptions. San Francisco couldn’t take advantage of a 21-yard field in the first quarter after a Deommodore Lenoir pick and had to settle for a field goal. So the Cowboys were able to keep it close in the final moments of the game.

After Robbie Gould knocked through his fourth field goal of the evening to stay a perfect 29-of-29 lifetime in the playoffs, the Cowboys took over down by seven points with 3:04 left.

Prescott took a couple shots down field before a Samson Ebukam sack forced a punt. After Purdy and the 49ers offense couldn't run out the clock, the defense held off Dallas' desperation drive with under a minute.

"It’s exactly where you want to be, right?" tight end George Kittle said. "At the start of the year, back in OTA’s all you’re doing is preparing for the Super Bowl. To be one step away from that is awesome."

The 49ers have won a variety of ways during their current 12-game win streak, but this might have been the grittiest of them all. The Cowboys' defense was also tough and their defensive front caused problems for Purdy all evening. But the QB didn't turn it over and orchestrated a key second-half touchdown drive, before the defense put it to rest.

"Definitely was a grinder," fullback Kyle Juszczyk said. "We kinda knew it was gonna be one of those grimy games."

The Niners defense had some question marks, especially the secondary, over the past few weeks but looked like the dominant unit that reigned over the first three months of the regular season. Prescott finished 23-of-37 for 206 yards, a touchdown and two picks, while the Cowboys averaged just 3.5 yards per carry (22 rushes, 76 yards).

"From the very first snap, the energy was on 10," safety Talanoa Hufanga said of the 49ers defense.

CMC to the end zone pic.twitter.com/82O1LVTiV5

Purdy finished 19-of-29 for 214 yards and no touchdowns, marking the first time he didn’t throw for two touchdowns in a game since taking over for Jimmy Garoppolo in Week 13. It took until the first play of the fourth quarter for the 49ers to score their first touchdown, as Christian McCaffrey’s two-yard score capped off a 10-play, 91-yard drive. The series was aided by a huge, juggling catch by George Kittle down the middle for 30 yards.

Kittle up the middle pic.twitter.com/9XXNlqgKTr

In all, Dallas holds a 5-4 advantage in the postseason series. The Cowboys beat the Niners in three straight playoff games from 1970-72, before "The Catch" in 1981 and three consecutive NFC title game meetings from 1992-94. Coupled with the 1994 NFC Championship win and last year's victory at Jerry's World, the Niners have now won the past three postseason matchups.

"It's incredibly difficult," Juszczyk said. "It takes every bit of devotion, every bit of energy throughout the season and offseason. It's just so crazy, because it really did feel like it took so much to get here. We had two or three rough years to get to that point. Now to be there, three out of four, it's incredible. I don't take it for granted. That's something that I really stress to the young guys and new guys, not to take this stuff for granted. But it is not easy and it is not guaranteed." 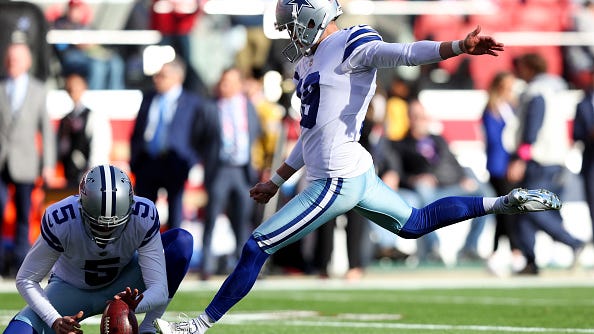