49ers linebacker Fred Warner had to exit in the fourth quarter of his team’s 23-17 Wild Card win against the Dallas Cowboys after tweaking his right ankle. Warner's injury came after the 49ers lost edge rusher Nick Bosa to a concussion at the end of the second quarter.

Warner injured himself as the Cowboys made a comeback push but was able to leave the field on his own power. He had to sit on the bench as Dak Prescott scored a rushing touchdown to bring the score to its final margin. Warner had five tackles before exiting the game.

Fred Warner is in serious pain and that's not good for Niners fans at all. pic.twitter.com/Qx11mxIXQJ

The TV broadcast didn't show a replay of Warner going down, but CBS' Tony Romo said it looked like a "non-contact" injury. After the game, 49ers coach Kyle Shanahan gave reporters an update.

"I think it's similar to what he did earlier in the year," Shanahan said. "But we're not sure yet."

Shanahan added that Warner would undergo further testing Monday and that "he's got a chance" to play Sunday against the Green Bay Packers in the divisional round.

Warner missed the Week 13 matchup against the Seattle Seahawks with a hamstring injury, but hasn't missed any game action due to an ankle injury this season. He has started in 67 of a possible 68 career games, including the postseason.

The 49ers defense held strong against Dallas' top-rated offense, despite a fake punt by Dallas early in the fourth quarter that helped turn the momentum of the game.

San Francisco is no stranger to high-profile injuries. But losing playmakers like Warner, the team’s key leader at middle linebacker, and Bosa, one of the league’s top pass-rushers, is a monumental task for any team to overcome. The 49ers pulled it off, though, and will be monitoring Warner and Bosa heading into next week's divisional round matchup against the Green Bay Packers. 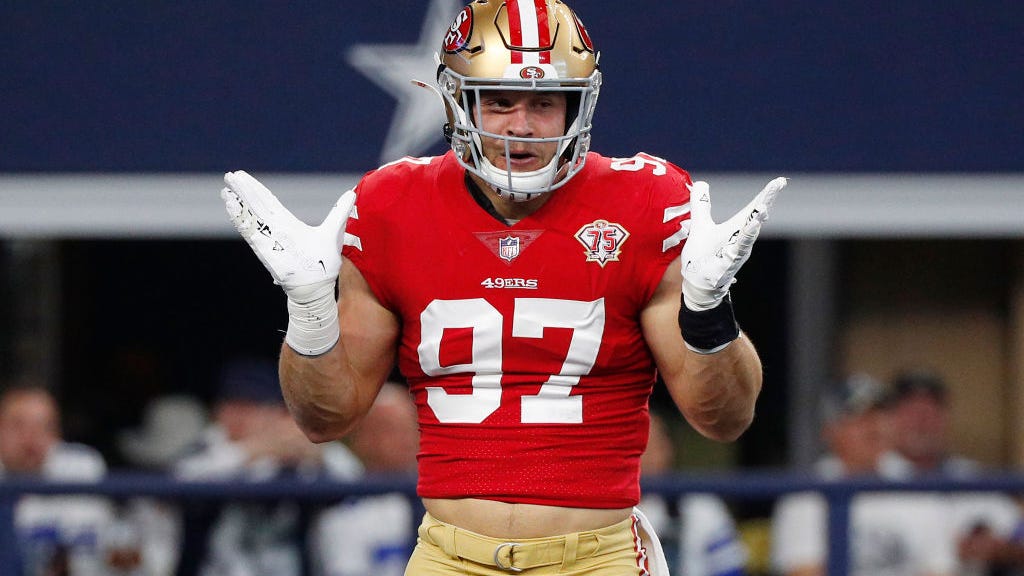 Nick Bosa exits 49ers-Cowboys game in first half, ruled out