Jimmy Garoppolo told reporters that getting back in the huddle with his 49ers teammates Sunday felt "like riding a bike."

With Trey Lance on injured reserve and out for the entire 2022 season, Jimmy G is running the show again in Santa Clara. During his press conference with reporters Thursday, the veteran quarterback admitted that it initially stung a bit when Kyle Shanahan told Garoppolo the plan to move forward with Lance as the starter in 2022.

"It lights a fire under you, I’ll tell you that,” Garoppolo said. “As a competitor, whenever you get told something like that, it’ll get you going a little bit."

When Garoppolo and the 49ers were bounced out of the NFC Championship in January, most figured his time in Santa Clara was finished. But his March 8 shoulder surgery put the 49ers in a holding pattern as the free agency frenzy unfolded and his list of suitors dried up.

After restructuring his deal from a $24.2 million base salary to $6.5 million with nearly $10 million more in incentives, it only took Garoppolo five quarters to get back in the starting lineup after Lance’s season-ending ankle/leg injury in Week 2.

“You always want to be on the field, you know?” Garoppolo said. “So it's, you always have that in your mind that you're preparing that way. And then just for how things have worked out, I mean, it's pretty crazy. But I don't know, everything happens for a reason. I'm a big believer in that and it's just another opportunity.”

Garoppolo started off hot Sunday once he entered the game, completing his first five passes for 80 yards and a touchdown, a 38-yard toss to tight end Ross Dwelley. Jimmy G finished 13-of-21 for 154 yards, a passing TD and a one-yard rushing score.

49ers coach Kyle Shanahan is known for his creative and cerebral play-calling, but Garoppolo said he enjoyed having a gunslinger’s mentality once the offense had to adjust with his return.

“The more freedom you have as a quarterback, you play better, you’re more confident,” Garoppolo said. “Good things will happen.”

While Lance is still recovering from Monday’s surgery, Garoppolo said the 22-year-old has been able to use Zoom to virtually attend team meetings. Garoppolo suffered an ACL injury in Week 3 of the 2018 season, so he knows what it’s like to have to overcome a devastating setback.

“I actually heard (Nick) Bosa’s presser the other day and he worded it pretty well, because there is a moment where you feel like your life is over and you feel like, ‘I can never get back to where I was,’” Garoppolo said. “But that passes and it just you gotta hit a point where it does pass and you mentally move on from that and there'll be hurdles for him to overcome, but I've been around Trey for you know, a couple of years now and he's a tough dude. So he'll be all right.” 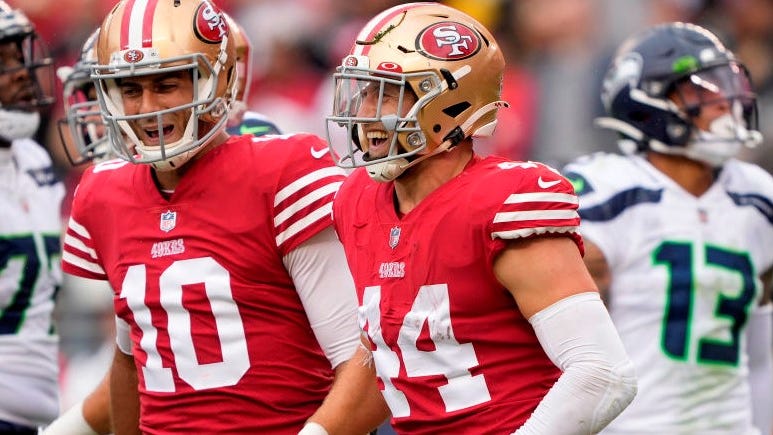