Jimmy Garoppolo authored one of his finest moments in a 49ers uniform last week, when he led San Francisco to an improbable 17-point comeback in a 27-24 win over the Los Angeles Rams.

The 49ers entered Week 18 with some uncertainty, as they didn’t know if Garoppolo would be able to grip or throw the ball properly after he tore a ligament and fractured a small bone in his right thumb. 49ers general manager John Lynch joined 95.7 The Game’s “The Morning Roast” Friday to share details about last week’s decision to start Garoppolo. You can listen to the full interview below:

Last Tuesday was a crucial day for Garoppolo and his thumb. It had been nine days since he injured his thumb in the Week 17 matchup against the Tennessee Titans and coach Kyle Shanahan wanted Garoppolo to test out his thumb with trainers and 49ers quarterbacks coach Rich Scangarello.

“Kyle told me, ‘I wasn’t going to watch, but I eventually gave in and went out there,’” Lynch told hosts Bonta Hill and Joe Shasky. “Long story short, Kyle told Jimmy, 'Hey, I want you to go out there, I want you to test it. If you're ready, you come back and tell me, ‘I’m ready, Kyle’ and it’s your game.’ That’s exactly what happened. Jimmy went out and did that."

The next day, Garoppolo told reporters his thumb “f–king hurt” after the Tuesday throwing session. Lynch said doctors told the 49ers that it’d merely be an issue of pain tolerance for Garoppolo. Rookie Trey Lance looked good in the Week 17 win over the Houston Texans, so the 49ers had a decision to make, Then we all know what happened Sunday.

“We trusted Jimmy, but you still wanted to see it in practice and it looked really good in practice,” Lynch said. “I really commend Kyle, I commend our guys for the fortitude to kind of stay with who we are in that game. … I thought it was a masterful job by our coaching staff and our players, just to have the strength and the belief to overcome down there."

Jimmy G led the 49ers on a game-tying five-play, 88-yard drive at the end of regulation before an overtime field goal drive ended up being the game-winner.

“His teammates love him,” Lynch said. “They love him for his grit. I think the fact he even lined up last week, a lot of people wouldn’t have done that at that position. I thought it was incredibly tough. Jimmy’s clutch, too. In the big moments, it's not always going to be perfect, and you're going to make mistakes, but I think his ability to bounce back and I don't think he ever gets the credit – Kyle's talked about it – for how talented of a thrower that he is. The coolest thing is to see the belief his teammates have in him, and he's earned that.” 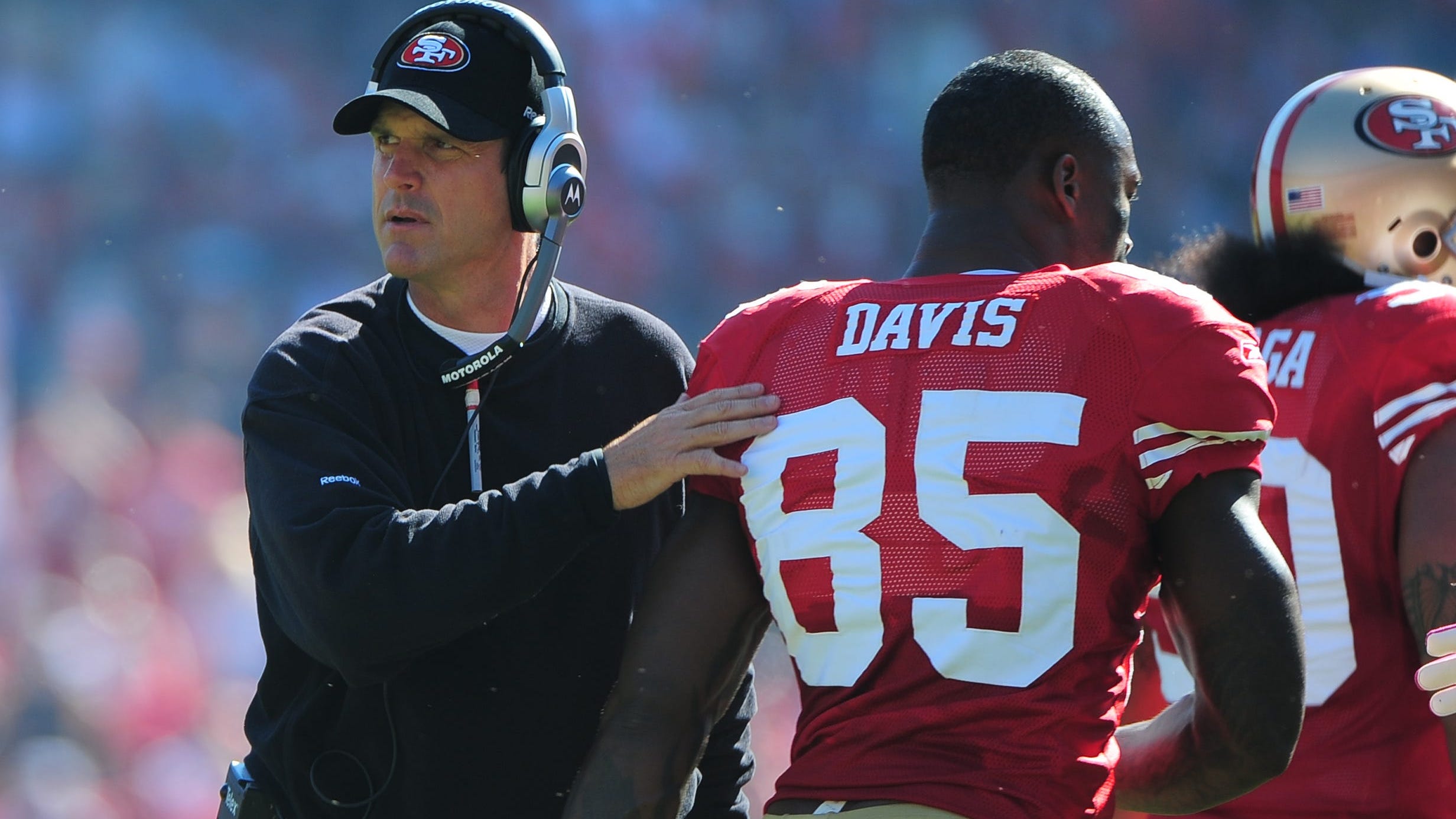 Jim Harbaugh 'would win a lot of games' if he returns to the NFL, says Vernon Davis