Try as he might, Kyle Shanahan can’t go through a press conference without getting a quarterback question.

During his session with reporters Wednesday, Shanahan was asked if he could envision a scenario where Jimmy Garoppolo is still on the roster in 2022. The 49ers coach didn’t rule out the possibility, while reiterating that all roads eventually lead to Trey Lance.

“I think there’s a chance for anything,” Shanahan said, via the team’s YouTube channel. “I think we’ve made it clear that Trey is our guy of the future, whenever that’ll happen. It’s also nothing against Jimmy that we took him. But we do believe Trey will be our guy of the future. Like I said, it would be really hard if Jimmy’s on it for [Lance] to him out right away. It’s kind of going like that right now. Not thinking much past that.”

The 49ers used three first-rounders and a third-rounder to move up and select Lance No. 3 overall in April, but he has only played in six meaningful quarters this season. Meanwhile, other first-round rookie quarterbacks like Trevor Lawrence, Zach Wilson, Justin Fields and Mac Jones have received extensive playing experience. Lance was slowed by a Week 5 knee injury and his only playing time since in saw garbage-time during last week’s 30-10 blowout win of the Jacksonville Jaguars.

Garoppolo got off to a shaky start but has been one of football’s most efficient signal-callers over the last month.

Ultimately, this decision will probably come down to money. Though Shanahan left the door open for Garoppolo to return in 2022 you’d have to think it’s unfeasible considering Jimmy G is due to have a $27 million cap hit. The 49ers can shed $25.6 million off their salary cap next year if they trade or release Garoppolo. It doesn’t make sense for a franchise to expend so much draft and salary capital at the same position for two straight years.

“Honestly, with the possibilities, I try not to close any doors too early,” Garoppolo said Wednesday. “It’s one of those situations, you just gotta let it play out, I think. We got a lot going on with the season and everything right now, if you start thinking about those other things you just get distracted I think. When we cross that bridge, we’ll assess everything then.”

In the NFL, it’s almost like a cheat code if you can have a productive quarterback on a rookie deal. The 49ers are grooming Lance to take on that role next season but all those clamoring for the young signal-caller will probably have to keep waiting. Shanahan has been steadfast about his choice to roll out Garoppolo every week and improve Lance on the practice fields. Following three wins in four weeks, don’t expect it to change soon. 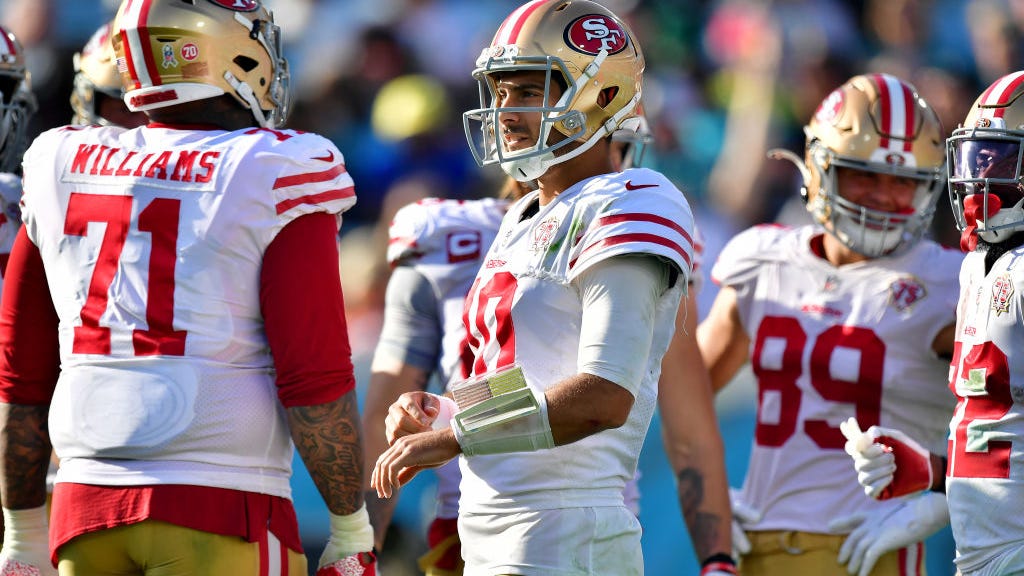 49ers tried to throw a touchdown pass to Trent Williams