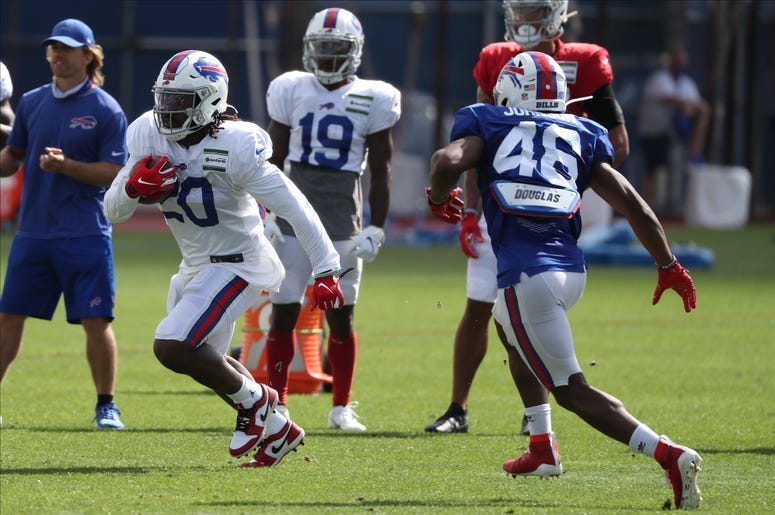 Here are some observations and video from Tuesday's practice session at Buffalo Bills training camp in Orchard Park:

After a really strong performance on Monday, quarterback Josh Allen had a much more uneven day. There were definitely some pin-point strikes, but also some balls that went into no-man's land, where he either missed or there was poor communication between him and his receivers.

Allen was actually picked off by safety Micah Hyde for, what would have been, a touchdown the other way on the very first play of 11-on-11 work (intended for Stefon Diggs), but then came right back with two darts for completions in traffic on the next two plays.

On Tuesday, rookie kicker Tyler Bass was 6-for-9 during the live field goal portion of practice. On Wednesday, veteran Stephen Hauschka was 6-for-7, missing on a 53-yarder after connecting from between 37 and 50 yards the previous five kicks. After the miss, he then was good from 53 yards to wrap-up. Bass didn't attempt any kicks.

Play of the Day

Wide receiver Duke Williams turned in the Play of the Day when he went high on a jump ball and took it right out of the hands of rookie cornerback Ike Brown as the two were battling for it. Williams not only did a great job to make the catch at the highest point, but he had the presence of mind to secure it as he was headed to the ground, and was able to tuck it in before hitting the turf. It was a big-time catch from the second-year player fighting for a spot.

Monday's practice ended with wide receiver John Brown catching a deep pass from Allen against Tre'Davious White. On Tuesday, White got his revenge. On the second-to-last play overall, Allen tried to hit Diggs in the end zone, but White was there to make a really nice pass breakup. Just as White was breaking it up, Hyde and fellow safety Jordan Poyer were also getting there and made sure Diggs didn't have a chance, which shows how much attention Diggs got on the play after the ball was in the air.

On the very last play, the offense attempted a two-point conversion. The defense had terrific coverage across the field and the ball fell incomplete from Allen. Defenders celebrated the same way the offense did a day earlier.

Here is a full Twitter thread of videos from Tuesday's practice:

A thread with videos of some action at Bills practice.....

The team will be back on the field Wednesday morning.