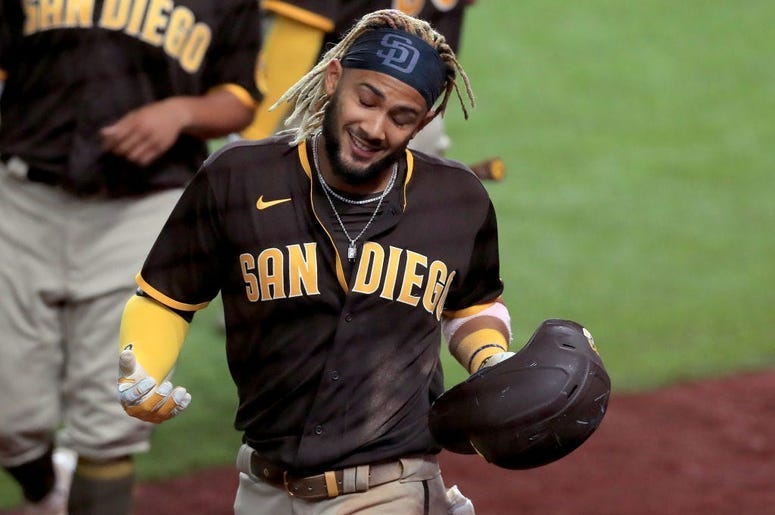 Fernando Tatis Jr. is one of the most exciting young talents and baseball and is already staking his claim as one of the best players currently in the game.

But on Tuesday morning, he found himself entrenched in yet another one of baseball's "unwritten rules" debates after he belted a grand slam on a 3-0 pitch in the eighth inning with his team already up seven runs on the Texas Rangers.

The Rangers took exception to Tatis swinging in that scenario, throwing behind Manny Machado on the next pitch.

Not only did Rangers manager Chris Woodward criticize Tatis after the game, but Padres manager Jayce Tingle also was not happy with his own player and the 21-year-old star had to apologize - for hitting a grand slam.

Tingler said Tatis is young, free spirit, focused & “that’s the last thing we’ll ever take away.” But said the look he gave Tatis after grand slam was to be “a learning experience.” Said a lot of guys have green light 3-0 but w/ comfortable lead, not trying to run up score.

And here we have Tatis apologizing for hitting a home run lol pic.twitter.com/1iTm6lTUyc

Naturally, this became the main talking point on social media well into Tuesday morning with fans, media and fellow baseball players sounding off on the situation.

Former Phillies GM Ruben Amaro Jr. was among the minority who felt Tatis was in the wrong for swinging 3-0 with a seven-run lead.

Nothing right about Tatis’ actions IMO. It’s just not the way you do things. Sadly, in today’s society it seems like there is a tendency to “just get mine”. I get trying to do your best for you but there is some etiquette and respect in the game that needs to be upheld. https://t.co/sn07qfHIMQ

Players, past and present, also chimed in with their feelings and most of them seemed to support Tatis swinging - even the pitchers - although Phil Hughes admitted if he was on the mound he probably wouldn't be happy, but as a fan enjoyed the moment.

3-0 counts rule 😒😒 you just have to pitch better if you don’t want that to happen I never see that rule and I take my self as an example because I’m the king🤴🏽🤴🏽of 3-0 counts 🤷🏻‍♂️🤷🏻‍♂️ https://t.co/TkMDDOCIkX

So you take a pitch...now you're 3-1. Then the pitcher comes back with a great setup pitch...3-2. Now you're ready to groundout into a double play. Everyone should hit 3-0. Grand Slams are a huge stat. @tatis_jr https://t.co/4D3ilsD9Sh

Fernando Tatis keep playing hard and playing great, it’s a pleasure to watch you play, love your success and the Padres rise to be a winner. Keep leading the way. It ain’t easy to hit Hrs. Keep bringing energy you have to the game, we need players like you. An All Star

Some pointed out that Woodward was a bit hypocritical for his criticism on Tatis and respecting the "unwritten rules" based on some of the things he did as a player.

I remember a first baseman purposefully dropping a ball in foul territory against the Red Sox at the end of a season so a pitcher could have a second chase to record his 200th strikeout of the season and Woodward defending it. Now this. https://t.co/mLH6Xo4pqu

With the Jays already leading 10-4 in the top of the ninth, current Texas Rangers manager Chris Woodward swings away and hits his only career grand slam.

Anyway, Fernando Tatis Jr. is fun as hell and everybody wants to see him crush balls. pic.twitter.com/KiTWaj5sKy

Fans and media also sided with Tatis with some pointing out that a seven-run lead is not insurmountable (the Rangers had two more chances at the plate).

Is there anything dumber in sports the “unwritten rules of baseball”?

Instead of celebrating an incredible talent like Tatis Jr., they’re making him apologize for annihilating a 3-0 pitch. Ridiculous. How about ... throw a better pitch? pic.twitter.com/w7SLXazcgr

How sad to turn on the tv, and hear #Padres @tatis_jr apologizing for swinging at a 3-0 pitch and hitting a grand slam, in a lopsided game. One of the most exciting young players in the game. Apologizing.

I think it’s fair to say Michael Jordan was firmly in the “go for the jugular” camp.