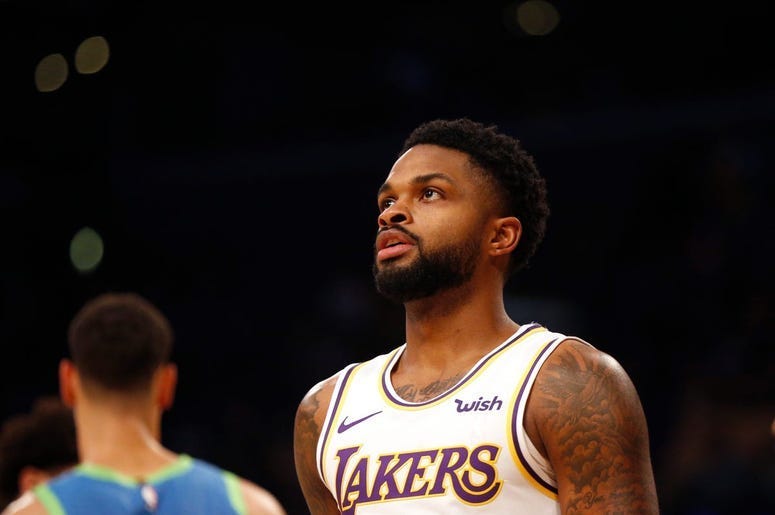 One potentially overlooked aspect of the Orlando bubble is how the NBA plans to feed its players throughout the league's three-month stay at Disney World. Will commissioner Adam Silver accommodate the 22 Orlando squads by flying in Michelin-star chefs from across the globe? Salt Bae or Gordon Ramsey perhaps?

The NBA has allotted $150 million to its Orlando restart and given that generous sum, one would assume the meal offerings would be top-notch. However, that hasn't been the case so far.

Troy Daniels of the Denver Nuggets documented his initial meal upon arriving in the bubble Tuesday night and while the shooting guard's dinner isn't quite "Lunchables pizza" or "day-old bologna" bad, its presentation left much to be desired. Served on a cafeteria tray with bland ingredients and flimsy-looking Tupperware, Disney's cuisine would not appear to be of the world-class variety. It's unclear if the meal shown on Instagram constituted the 28-year-old's entire dinner or a mere portion of it, but I doubt salad, watermelon slices and a bread roll would be enough to adequately feed the 6'4," 205-pound Daniels.

Troy Daniels’ dinner on Night 1 inside the NBA Bubble. pic.twitter.com/cVYfuwSzxQ

This probably isn't the spread players were hoping for but fortunately, improvements are reportedly coming to the NBA's bubble menu. Marc Stein of the New York Times said players will be much better-fed once the league concludes its quarantine in 48 hours. That's good news for Daniels and others who are probably searching high and low for anything to satisfy their immense appetites. Hopefully Tuesday's meal mishap was a mere blip on the league's radar and not an ominous sign of things to come as the NBA tries to get its ducks in a row amid ongoing logistical challenges brought on by the coronavirus.

Food in the NBA bubble changes after quarantines are completed. Player meals won't look like airline trays after the first 48 hours ...

Twitter had plenty of fun at the NBA's expense with many comparing Daniels' dinner to the similarly meager meals offered at Ja Rule's aborted Fyre Festival in 2017. One user even made a clever reference to Michael Jordan's pizza disaster in Salt Lake City, which led to his iconic "Flu Game" during the 1997 NBA Finals.

The NBA out here looking like an upscale Fyre Festival. pic.twitter.com/nY7ZFLsRK7

Next up, delivery pizza from Salt Lake City.

The NBA's Orlando restart is underway with teams beginning training camp this week, but clearly the league still has some culinary kinks to work out.