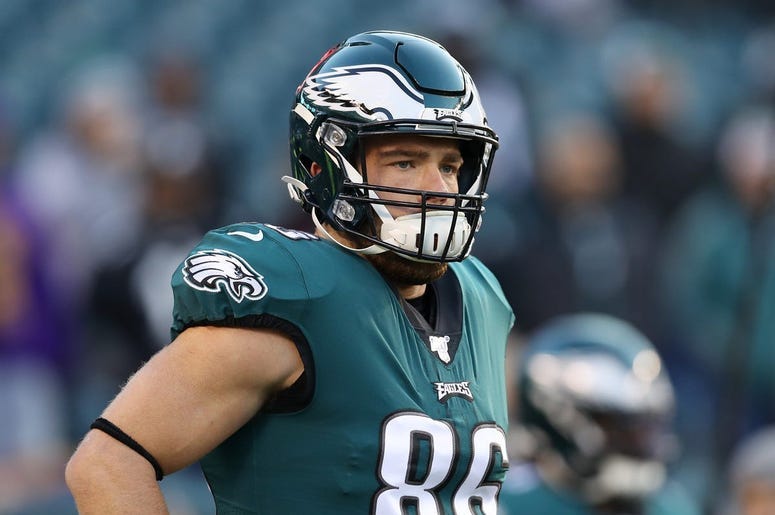 Soon, along with my various responsibilities at RADIO.COM, I'll be taking on a second full-time job as a participant in SIX, count 'em, six season-long fantasy leagues while also mixing in a healthy dose of daily fantasy (FanDuel is my DFS poison) and, if there's time for it, eating and sleeping. Clearly, moderation is a foreign concept to me, but I know I'm not alone in my fantasy obsession. I agree six leagues is a bit much, but think of it like a fresh-out-of-the-oven batch of chocolate-chip cookies. Can you really eat just one? Even Buddhist monks don't have that kind of restraint.

It's easy to galaxy-brain your fantasy draft, overthinking to the point of near-paralysis. We've all lived through the panic of seeing those red numbers flash across the computer screen, warning you the clock is about to expire. "Oh no, it's going to auto-pick Kalen Ballage. HELP!" To simplify fantasy football's vast and often overwhelming terrain of uncertainty, here are 10 players I'll be avoiding at all costs this summer:

You'd think I would have learned by now to stop doubting Ertz. I was spouting the same anti-Ertz rhetoric around this time last year, only for the star tight end to lead the Eagles in ... well you name it: catches (88), receiving yards (916), receiving scores (six), targets (135). While I may have been a year early on the Ertz truther movement (he finished as the overall TE4 in PPR leagues last fall), I still think there's reason to be skeptical of the eighth-year Stanford product. Ertz's volume was through the roof last season but the Birds should be a much healthier bunch in 2020 with DeSean Jackson approaching 100 percent following last year's core surgery and veteran Alshon Jeffery slated to return at some point. The Eagles also made an investment in first-round burner Jalen Reagor out of TCU. Most concerning is the development of fellow tight end Dallas Goedert, who was arguably more efficient than Ertz last season, turning 87 targets into a stout 58-607-5 receiving line on 771 offensive snaps (71-percent snap share). Philadelphia will continue to employ 12 personnel (two tight-end sets) on a frequent basis, though it's clear the gap between Ertz and his competition is closing. At a destitute fantasy position, Ertz is still worthy of TE1 status, though I doubt I'll be taking the plunge at his current fourth-round ADP (38.7 overall on FantasyPros). 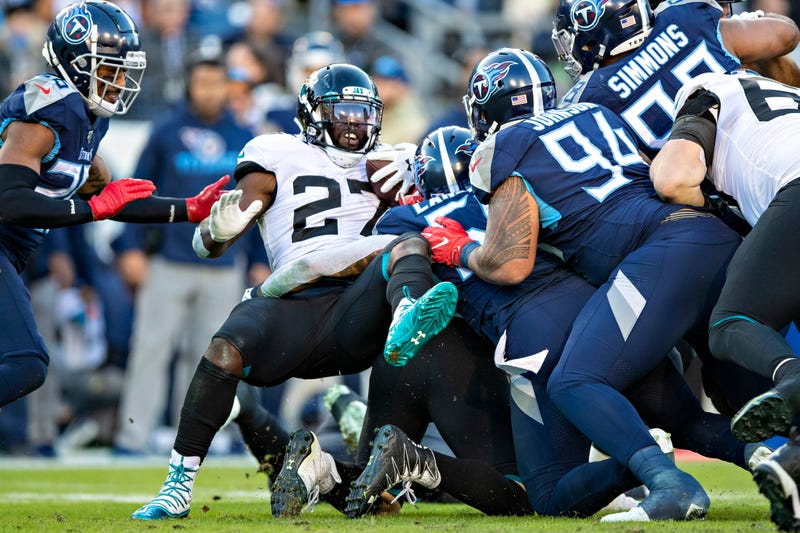 After weathering injuries throughout his first two seasons, Fournette was finally able to stay upright in 2019, setting career-highs in both rushing yards (1,152) and yards per carry (4.3) while also leading the Jags in catches with 76. That amounted to an RB7 finish in PPR leagues, though I don't anticipate having much exposure to the LSU alum for a variety of reasons. For starters, Fournette's bloated 76-522-0 receiving line a year ago was largely empty calories. His aDOT (average depth of target) was a pathetic 0.2 while his miserable 6.9 yards per catch ranked 29th out of 37 qualified ball-carriers in 2019. The presence of newcomer Chris Thompson, a staple of OC Jay Gruden's offenses back in Washington, will likely throw a wrench in Fournette's already-limited receiving output. Jacksonville was quick to decline Fournette's fifth-year option for 2021, not a particularly encouraging sign for the embattled 25-year-old. Compounding matters, Fournette was an anemic finisher last season, logging just three touchdowns despite seeing 43 carries inside the red zone (tied for fifth-most). Handling bell-cow duties for a team projected to win just five games (tied for the lowest Vegas total), goal-line opportunities for the fourth-year compiler will be few and far between. Not to body-shame the guy, but does this look like an NFL workhorse to you? Suffice to say, I'll be watching Fournette from a safe distance in 2020.

It was probably na?ve of us to think Rob Gronkowski's retirement would last. After a year spent doing Gronk stuff (wrestling, twerking, hosting game shows), the 6'6," 268-pound monstrosity decided to give football another go, rebranding himself as a Tampa Bay Buccaneer. There's a case to be made for the 31-year-old's return to fantasy relevance--Gronk boasts a decade of on-field chemistry with fellow Patriots defector Tom Brady and should have fresh legs after getting a much-needed breather in 2019. Also in the plus column--he's Rob Gronkowski, a future Hall of Famer and arguably the most dominant tight end to ever grace an NFL gridiron. As compelling a story as Gronk's comeback may be, let's not get swept up in the narrative. The last we saw of him, Gronkowski was an injury-diminished mess essentially reduced to a blocking/decoy role for New England. Even if you're convinced Gronk can somehow stay healthy (good luck with that--the last time he played an entire 16-game slate was 2011), don't count on his target share being anywhere near what it was in Foxboro. With a pair of All-Pro receivers in Mike Evans and Chris Godwin at the Bucs' disposal, it could be slim pickings for Gronk in Tampa, particularly under head coach Bruce Arians, whose offenses have rarely featured tight ends in prominent receiving roles. I understand he's a familiar face at a sink-or-swim fantasy position, but Gronk's current seventh-round ADP is still too rich for me.

Some may view Gurley as a rebound candidate in 2020. Even in a down year, he still managed 14 touchdowns last season and could benefit from a change of scenery in Atlanta, not far from where he starred during his college days at the University of Georgia. And though it feels like he's been around since the Clinton administration, the three-time Pro Bowler is still only 26. But remember, there's a reason Gurley logged a career-low 223 carries while losing work to the anonymous likes of Malcolm Brown and, to a lesser degree, Darrell Henderson, last season--his knee is cooked. The injury-prone Gurley saw his efficiency plummet last year (3.8 yards per carry) and also regressed as a receiver, tallying his fewest catches and yards since his debut season in 2015. The former NFL Offensive Player of the Year hasn't topped 100 yards rushing in a regular-season game since Week 13 of 2018 (around the time he fell into a timeshare with festively plump Broncos alum C.J. Anderson) and now joins an offense that ran the ball on a league-low 33.03 percent of plays last season. Anyone who has drafted this summer knows beggars can't be choosers when it comes to fantasy RB2s, but I can promise you Gurley won't be on any of my teams this year. 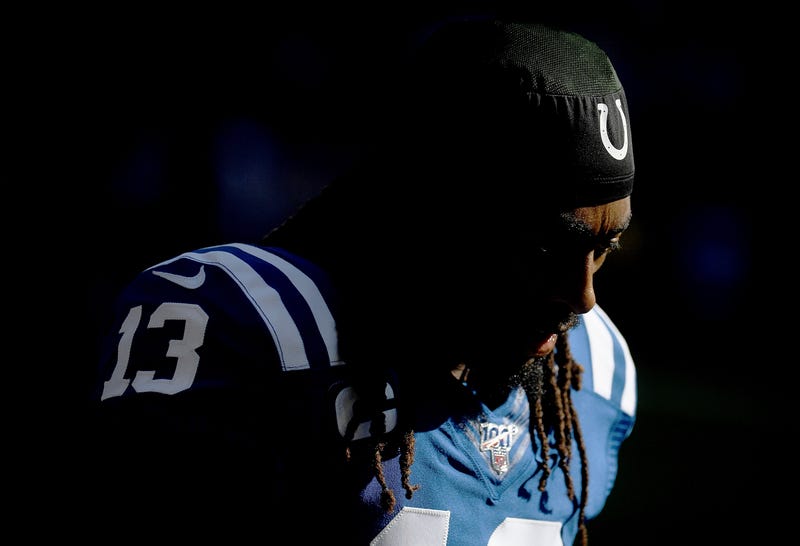 Compared to past seasons, Hilton is a relative bargain at his late fifth-round ADP. I suppose that's about where he should be going, though it's still not enticing enough for me. I'm not dismissing the 30-year-old's talent, which has been readily apparent throughout his spectacular Colts tenure. Last year was just the second time in seven seasons Hilton fell short of 1,000 yards receiving (he paced the league in that stat as recently as 2016). But what worries me about Hilton is the target competition he'll face from rookie Michael Pittman as well as 2019 second-rounder Parris Campbell who, thanks to a litany of injuries, was limited to 196 snaps as a rookie. Some may view Indy's quarterback change from game manager Jacoby Brissett to gun-slinging veteran Philip Rivers as a positive, but I wouldn't go that far, especially after seeing Rivers bottom out with 20 picks (third-most behind Jameis Winston and Baker Mayfield) last season. The Colts were already a run-leaning offense--only the Ravens, 49ers, Titans and Vikings ran on a higher percentage of plays in 2019--and I expect Indy to double-down on that this year after adding three-time All-American Jonathan Taylor to a backfield already featuring 1,000-yard rusher Marlon Mack. Coming off career-lows in virtually every receiving category (save for touchdowns, where he was still oddly effective with five end-zone visits in just 10 games), I can't muster much Hilton enthusiasm heading into 2020.

If you've been reading up on players to fade this offseason, odds are, you've seen Hooper's name pop up on every list, and for good reason. Hooper (who was the highest-paid tight end in football for a hot minute before George Kittle blew him out of the water with his recent five-year, $75-million extension) was among the most targeted players at his position last year, garnering a robust 18-percent target share in Atlanta. I can say with great certainty that feat will not be repeated in Cleveland, where the former Falcon now finds himself competing with the likes of Odell Beckham, Jarvis Landry (both coming off 1,000-yard receiving seasons), Kareem Hunt and fellow tight end David Njoku, assuming the latter isn't traded. That's concerning if you subscribe to the "too many cooks" theory, plus Hooper must also navigate a new offense, a challenge made harder by the recent COVID pandemic. That's a lot of moving parts to consider and though his ninth-round ADP isn't egregious (he's being drafted as the PPR TE11), I don't anticipate walking away with many Hooper shares in my upcoming drafts. In fact, I'd argue Hooper's replacement in Atlanta, former Ravens first-rounder Hayden Hurst, may actually be a better value.

Ingram was exceedingly productive in his Ravens debut, shredding defenses for a career-high 15 touchdowns (10 rushing, five receiving) on 228 touches. The former Heisman winner did gangbusters as the centerpiece of Baltimore's record-breaking ground attack despite being one of the more senior workhorses in football at age 29. While I still expect the Ravens to emphasize the run, the addition of second-round rookie J.K. Dobbins--a first-team All-American and FBS' third-leading rusher during his junior year at Ohio State--raises volume concerns for Ingram who, if you recall, didn't even lead the Ravens in rushing yards a year ago (he finished runner-up to league MVP Lamar Jackson). It's hard to quibble with the veteran's recent results from both efficiency (5.0 yards per attempt in 2019) and counting-stat perspectives (over 1,000 yards rushing in three of his last four seasons), but the 30-year-old's decline phase has to be coming sooner or later (we can't all have Frank Gore tiger blood cour