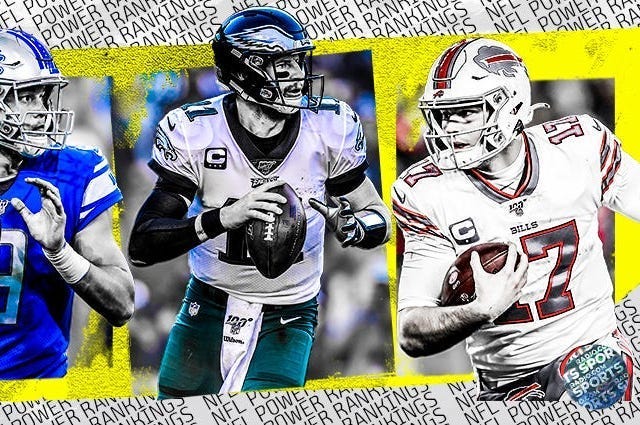 Without a typical offseason or any preseason games, it doesn't feel like we're closing in on the NFL season. But we are.

The defending Super Bowl Champion Kansas City Chiefs are set to welcome Deshaun Watson and the Houston Texans into Arrowhead Stadium - which will be without the usual raucous crowd - on Sept. 10 to begin the season.

Beyond being a matchup between Watson and Patrick Mahomes, two of the top five quarterbacks in the sport, the game represents a budding rivalry. Watson and company escaped Arrowhead with a 31-24 victory in Week 6 of the 2019 season, but didn't have as much luck when the two teams met in Kansas City in the Divisional Round of the AFC Playoffs. The Texans had a 24-0 lead in the game before you could blink, but the Chiefs' legendary offense stormed back to win the game 51-31, one of the signature moments in an eventual Super Bowl run.

Just thinking about an NFL game with two of the game's biggest stars, even one without fans, is enough to bring a smile to your face during what's been one of the most challenging years in modern history.

With less than a month until the 2020 season is scheduled to kick off, here are the latest RADIO.COM Sports NFL Power Rankings: 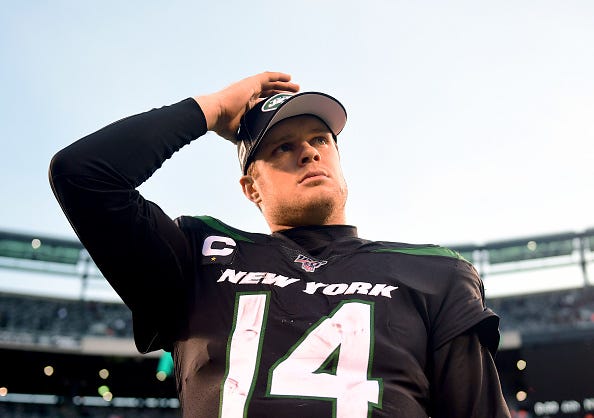 Especially after trading Jamal Adams to the Seattle Seahawks, 2020 isn't a year that the New York Jets should be expected to reach the postseason. However, the Jets need to leave a much better taste in the mouths of NFL observers in 2020 than they did in 2019. It's not Sam Darnold's fault that he got mono last year, or that he's had two different head coaches in two seasons. Darnold did lead the Jets to a 6-2 finish to the 2018 season, so the guess here is he continues to answer any questions about whether's he's the team's long-term future at the position. The outlook is much less rosy for Adam Gase and Le'Veon Bell. Gase's approval rating in New York is probably less than 20 percent, and it may be impossible for him to overcome that, especially if the Jets don't have a roster equipped to reach the postseason in 2020. Behind a disastrous offensive line and without Darnold for a chunk of the season, Bell averaged just 3.2 yards per carry in 2019. He'll almost certainly bounce back to some degree, but considering it would leave the Jets with just $4 million in dead cap if they moved on from Bell after this season, it's hard to imagine him on the team in 2021. 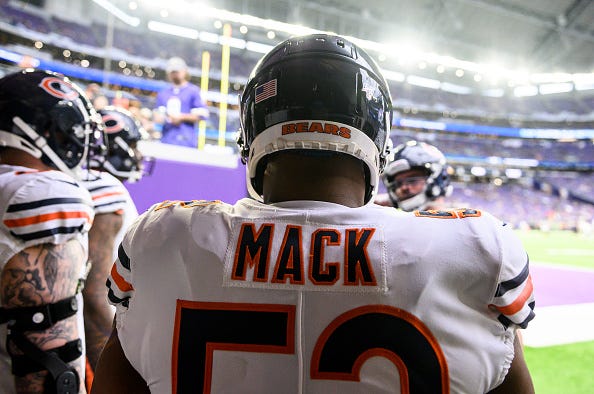 Khalil Mack is one of the most dominant players in the NFL. Photo credit (Stephen Maturen/Getty Images)
It's Hard to Figure Out the Bears

As much as Eddie Goldman's opt out may hurt the Bears in 2020, you're pretty confident that a defense that includes Khalil Mack, Roquan Smith, Akiem Hicks, Danny Trevathan and Kyle Fuller will perform at a playoff caliber. There's much less certainty about the offense. We've discussed Mitchell Trubisky ad nauseam, but we really still don't know what Nick Foles is. When Foles is hot, he can play at an elite level. But he's had some pretty ugly moments in St. Louis and Jacksonville, and there hasn't been much of an in between. The strangest thing about Foles' career is that while he got his biggest opportunity because of an injury to Carson Wentz in Philadelphia, he's never started more than 11 games in a season in his career and has struggled to stay healthy himself. The NFC North is a division that's seemingly up for grabs, but there's too much uncertainty surrounding Matt Nagy's offense to pick the Bears. 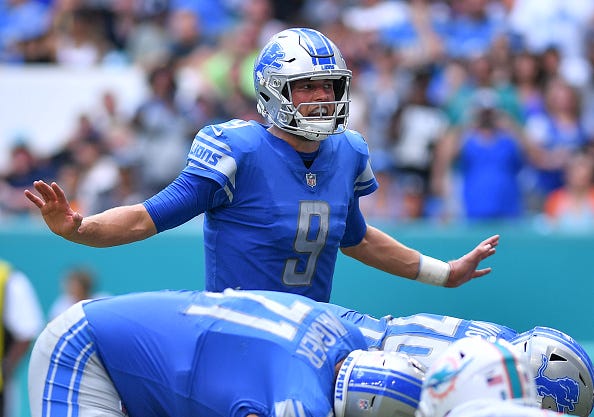 Matthew Stafford is one of the most accomplished statistical quarterbacks of his era. Photo credit (Mark Brown/Getty Images)
2020 May Be Matthew Stafford's Moment

If you're looking for a team that could go worst to first in 2020, the Lions should be near the top of the list. The team bottomed out in the second half of the 2020 season after Matthew Stafford suffered a season-ending back injury, but had a win in Philadelphia on the road, nearly beat the eventual Super Bowl Champion Kansas City Chiefs and got screwed out of a victory over the Green Bay Packers because of what the league has acknowledged was unacceptable officiating. Stafford was playing at an elite level prior to his back injury, having thrown for 2,499 yards and 19 touchdowns in his first eight games in Darrell Bevell's system. The Lions have surrounded Stafford with a potentially elite group of skill-position talent with Kenny Golladay, Marvin Jones Jr., T.J. Hockenson and D'Andre Swift. With some budding turmoil in Green Bay and the Vikings retooling, Matt Patricia's defense may be the only thing that could stand in the way of the Lions winning the NFC North in 2020. 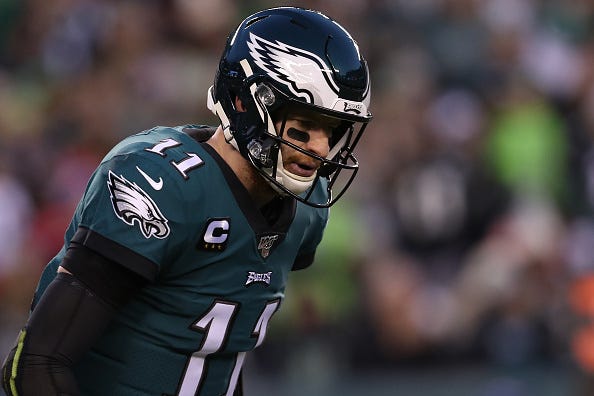 Carson Wentz is looking to build off a strong finish to the 2019 season. Photo credit (Patrick Smith/Getty Images)
Can Eagles Repeat in the NFC East?

Doug Pederson-coached teams are starting to feel a bit like Pete Carroll's Seattle Seahawks - even if they don't appear to be a great team on paper, it's not smart to bet against them reaching the postseason. Pederson's teams have entered December in each of the last three seasons with varying levels of turmoil, and made the playoffs in each of those campaigns. Pederson's teams have a record of 11-4 in December over the last three seasons. A year ago, Carson Wentz led an Eagles team decimated by wide receiving injuries to the postseason. As Colin Cowherd puts it, Wentz was throwing to "deck chairs" in the final month of the season. It's difficult to tell how much upside a receiving corps led by 33-year-old DeSean Jackson and first-round pick Jalen Reagor has, but they're better than deck chairs, and could very well help the Eagles to make their fourth consecutive playoff appearance. 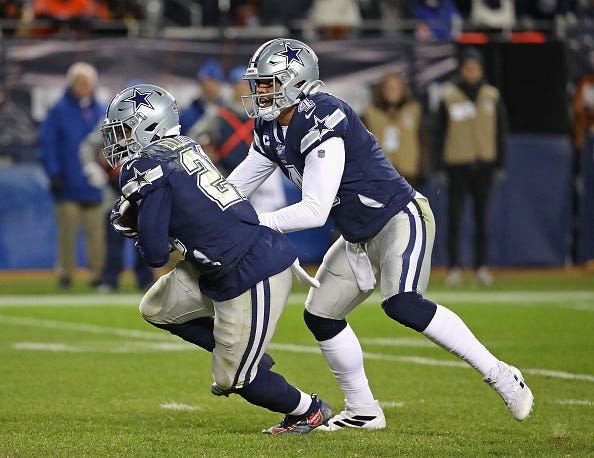 Dak Prescott and Ezekiel Elliott are at the forefront of the Cowboys' plans in 2020. Photo credit (Jonathan Daniel/Getty Images)
It's Hard Not to Be in Awe of the Cowboys' Offensive Talent

The Cowboys' offensive line isn't what it was a few years ago, as future Hall of Fame left tackle Tyron Smith has aged and the team lost center Travis Frederick to retirement this offseason. Still, it feels pretty safe to bet on a unit that includes Smith and Zack Martin. And the skill-position talent that the Cowboys will employ in Mike McCarthy's first season as the head coach is among the best in the league. CeeDee Lamb, arguably the most talented receiver in the draft, fell to the Cowboys at pick No. 17, and he'll join a group that already had two 1,000+ yard receivers a year ago in Amari Cooper and Michael Gallup. In what was deemed a down year by some, Ezekiel Elliott ran for 1,357 yards on 4.5 yards a carry in 2019, despite not reporting to the team until after training camp because of a contract holdout. It's the most overused nugget in sports media, but no team has won back-to-back NFC East titles since the Eagles won four straight from 2001-2004. Based on the law of averages, it seems like 2020 may be Dallas' season to win the division, as Dak Prescott battles for a long-term contract. 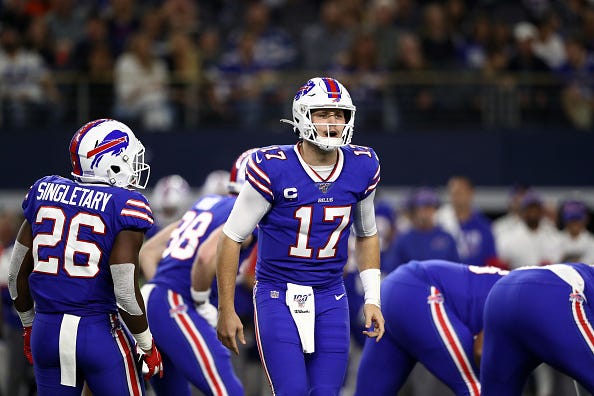 The Buffalo Bills have high hopes for the 2020 season. Photo credit (Ronald Martinez/Getty Images)
Can Bills Dethrone the Patriots?

The Bills gave the Patriots a run for their money in the AFC East race in 2020, ultimately having to settle for a Wild Card spot. With Tom Brady out of the division, Bills' icon Jim Kelly said he believes the team is the favorite to win the division, one that the Patriots have owned for the better part of the last two decades. Granted, Kelly made those comments before the Patriots signed Cam Newton, but without much of an offseason, we don't even know that Newton will start over Jarrett Stidham to open the season. What we do know is that Bills' head coach Sean McVay consistently turns in a top-five defensive unit, and after the offseason pickup of Stefon Diggs, the team's offense appears poised to really open up in Josh Allen's third NFL season. The guess here is that the Bills end the Patriots' run of 11 straight AFC East titles, and Bills' offensive coordinator Brian Daboll is a hot head coaching candidate next offseason.