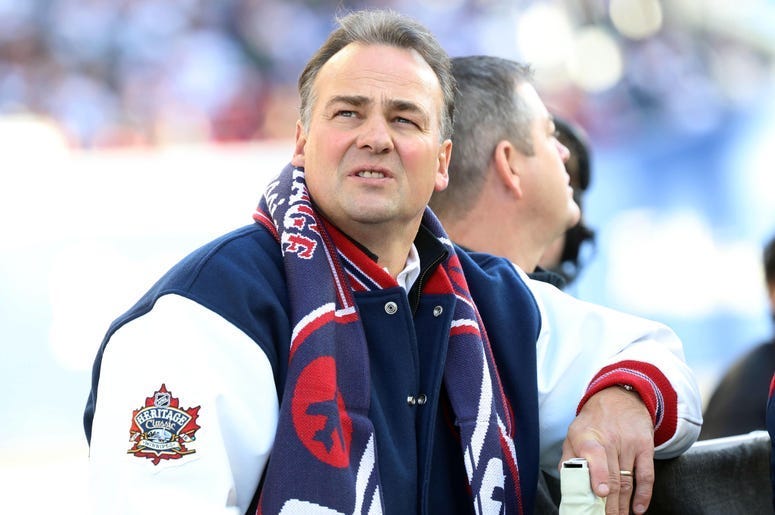 It was one of the bigger trades in Buffalo Sabres history.

At the 1990 NHL Draft, the Sabres acquired Dale Hawerchuk from the Winnipeg Jets. Sure, Phil Housley was sent to Winnipeg as part of that trade, but Hawerchuk was one of the best centers in the National Hockey League in the decade of the 1980's.

Hawerchuk could do it all. He had the tremendous vision, instinct and passing ability you want in a top-level center, but he had a great pair of hands and could score with the best of them. Hawerchuk, who came into the league at age 18, had a 30-goal season, six 40-goal seasons and a 50-goal campaign over his first eight years with Winnipeg. Then he became a member of the Sabres.Hawerchuk wasn't in Buffalo that long, but he did not disappoint. Over his five full seasons wearing blue and gold, Hawerchuk scored at least 86 points in each season. He didn't score as many goals as he did with the Jets, but Hawerchuk was a premier playmaker as his 275 assists would attest. He wasn't the captain of the Sabres, but he was certainly a leader. He was also a great example for any young players coming into the league and took time to both mentor them off the ice and teach them on the ice. Unfortunately, Hawerchuk didn't experience much playoff success with the Sabres, and that was the one blemish on, what would turn out to be, a Hall of Fame career.

As I think back to those Sabres teams of the early 1990s, it's amazing they weren't able to do more damage in the playoffs. In addition to Hawerchuk, Dave Andreychuk and Alexander Mogilny, the Sabres would add Pat LaFontaine, who came in a blockbuster deal with the New York Islanders. That's three Hall of Famers, and a fourth (Mogilny) who should be in the Hall. Yet, all they could manage was one playoff series win over the Boston Bruins in 1993.

You do remember "May Day", right?After a sweep of the Bruins that spring, the Sabres would lose to the Montreal Canadiens in the next round, but all four games were decided by one goal, and three of them went to overtime. The playoff heartbreaks during Hawerchuk's time here also included a seven-game series loss to the New Jersey Devils in 1994, which featured the famous Dave Hannan fourth overtime goal in Game 6. In 1992, the Sabres dropped another seven-game series in the first round to the Bruins. Hawerchuk scored the tying goal in the third period of the final game, but Dave Reid's goal proved to be the difference. Hawerchuk was the face of the franchise in Winnipeg, where he put the club on his back. He topped 100 points in six of his first eight seasons in Manitoba and scored more than 90 points in the other two. But Hawerchuk and the Jets happened to be in the same division with a guy named Wayne Gretzky and a dynasty in the Edmonton Oilers. The Jets played the Oilers six times in the playoffs over the course of the 1980s and lost all six series. I enjoyed watching Hawerchuk as a fan when he played with the Jets and they were on Hockey Night in Canada, and then I had the pleasure of covering his career with the Sabres. One of the perks of this job is getting to see great players show their skills on a regular basis.

Hawerchuk and LaFontaine are on a very short list of the best athletes I've ever seen in a Sabres or Bills uniform. Hawerchuk was taken at the way-too-young age of 57, but we will always have a treasure chest of great memories to tap into.