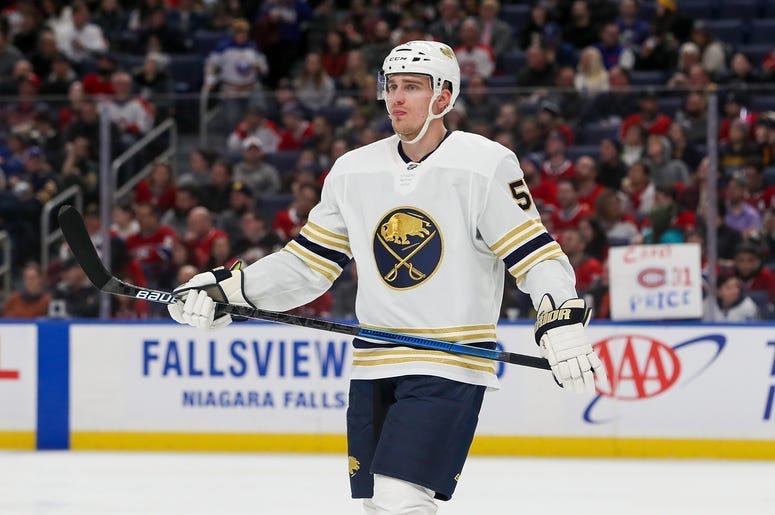 It was a day of brutal honesty for Buffalo Sabres defenseman Rasmus Ristolainen.

During his end-of-season press conference on Thursday, Ristolainen was open to the realities he faces as the veteran defenseman heads into another offseason without an appearance in the playoffs.

"I've been in Buffalo for seven years, and I've been losing every single year. It's tough, and I hope we're done," said Ristolainen.

Since the Sabres made Ristolainen their first round pick (8th overall) in the 2013 NHL Draft, the team has been absolutely dismal at times, going 200-300-71 in the seven years since. While the 25-year-old has not been able to find a formula for winning in his time in Buffalo, it is something that he says has not come easy for him even before his time with the Sabres.

"If I think [about] my whole career in Buffalo and before I came to Buffalo, I'm not sure if I've ever been [part of] a team where's there's been a winning culture," Ristolainen admitted. "Sometimes you ask the question, 'what is it?' I mean, I haven't seen it before or in Buffalo. This year, we built our culture a little bit better than the previous years, but I don't know if a lot of guys have been on winning teams for winning organizations. Personally, I haven't. Unfortunately, the team I played [for] when I was back in Finland, I was in the same position. The coach got fired every year, players got traded, the [general manager] got fired. I don't really know. What is it? I haven't seen it, [but] I wish."

Already in 493 career games with the Sabres, Ristolainen has managed to score 42 goals from the blue line, while registering 185 assists for 227 points.

While Ristolainen has always been able to put up production from the point as a top-four defenseman over the years, his play, at times, has been too inconsistent with lapses in his game in his own zone. In the 2018-19 season, Ristolainen finished the season with 43 points (5+38) in 78 games, but ended up with a league-worst minus-41 rating. While the plus/minus stat may be a skewed stat in today's game, there were plenty of instances where his game was a mess overall.

During locker room cleanout day last year, Ristolainen was asked by our own Paul Hamilton whether or not he needed a change of scenery. He responded by saying that he loved Buffalo, but that he knew changes would happen to the team.

A little more than a year later, Ristolainen was asked once again if he needed a change of scenery. And while he said that changes were likely to happen again, he just wants the chance to be part of that winning culture down the road.

"We had the same conversation [after last season]," he said. "Our team took some strides, but I feel like it wasn't enough. When you put so much hard work every summer, you work hard in every practice, it makes it even more frustrating because we weren't even close again. I want to win, if it's in Buffalo or somewhere else. I feel like when the team doesn't get to the goal that is the playoffs, I think you need to make some changes. If changes will happen, I know I'm one of the first ones probably who's going to get traded."

This season was a bit of an improvement for Ristolainen, who produced 33 points (6+27) in the shortened 69-game season in 2019-20. It appeared that his defensive game was shored up a bit more in years past, while he was able to handle his role better this season with reduced minutes.

The reasoning for his turnaround in his game, he says, is first-year head coach Ralph Krueger.

"Ralph helped me a lot, [as well as] the whole coaching staff. I feel he's probably one of the best coaches I've had," Ristolainen said. "I like the system he brought, and I feel like a big reason why I took some big steps forward - I feel like we played more as a unit [with the] forwards helping [the defensemen] more, and the other way too. I took some steps forward, but I'm still really hungry. I wish we could've played [in the] playoffs this year. It better be next year.

"His personality, how he treats people, how he coaches individual players in a different way. He wants to get to know you. The system he brought - he was the coach we needed here in Buffalo. I wish he would've come here a few years ago."

The Sabres ended up going 30-31-8 in Krueger's first season as head coach in Buffalo, which has been an improvement from the two years prior under the leadership of Phil Housley. He was able to establish a culture in the locker room, he earned the respect of the players in the Buffalo locker room, and the play of the team on the ice was noticeable difference in 2019-20.

While things are trending in the right direction for the team, Ristolainen knows that this team can be much better than how this past year ended.

"When we play other teams, I can't see what happens in their [locker] room or what happens when they train and it's hard to say. They are consistent," Ristolainen said. "I feel sometimes when we were winning, the emotions were too high. When we were losing, then the emotions were too low. We should try to keep an even level, doesn't matter what happens, and trust our system and believe it's going to work if we stick with it."

As for the future of the blue line in Buffalo, Ristolainen knows that the team is in relatively good hands with the presence of 20-year-olds Rasmus Dahlin and Henri Jokiharju. Dahlin continued to show the flourishing of his game in his second year with the Sabres, while Jokiharju showed his potential as a really solid two-way defenseman.

"They played really well this season and they have a bright future ahead of them," Ristolainen said. "Also, we have a lot of good young people on our team. They are fun to interact with every day and work with them."

But while he acknowledged the the two young defensemen on the blue line and the other young players for the future of the team, Ristolainen felt like he had heard that sentiment plenty of times in his tenure in Buffalo.

"Buffalo has a bright future, but we've been saying the 'bright future' for seven years now for when I've been here. Not sure when is it?"

You can listen to Ristolainen's entire press conference below: