DeVonta Smith had one of the greatest college football seasons from a wide receiver in NCAA history this past year.

The Alabama senior finished with 117 receptions for 1,856 yards and 23 touchdowns, including 12 catches for 215 yards and three touchdowns in the national championship game, en route to becoming the first wide receiver to win the Heisman Trophy since Desmond Howard won it in 1991.

Even with his success, though, Smith is not necessarily a slam dunk to be the first wide receiver off the board.

There is debate between whether Smith or LSU’s Ja’Marr Chase is at the top of the class at the position, with the knock against Smith being his 175-pound frame.

Even so, Smith is regarded as a potential top-five pick and it would be a shock if he were to fall outside the top 15.

There are plenty of teams that could use an explosive playmaker like Smith drafting in those spots. Here’s a look at some of the potential fits for the Heisman Trophy winner: 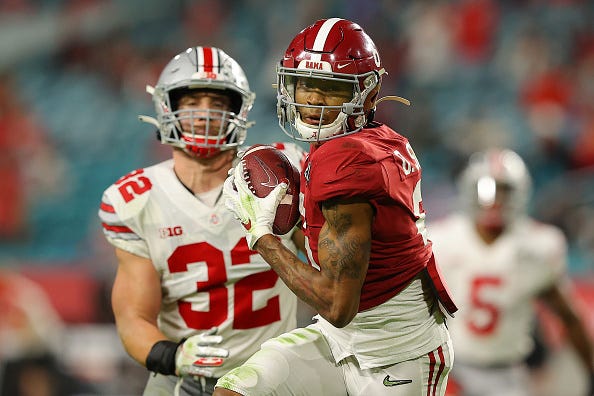 The Dolphins could certainly use a wide receiver and with the No. 3 pick they could have their pick of the litter between Smith and Chase.

Drafting Smith would reunite him with his former college quarterback in Tua Tagovailoa — assuming Tagovailoa remains the Dolphins QB. While Smith’s breakout season came after Tagaovailoa’s time, the two still had great rapport his junior year and they may be able to recreate that chemistry in the Miami offense. 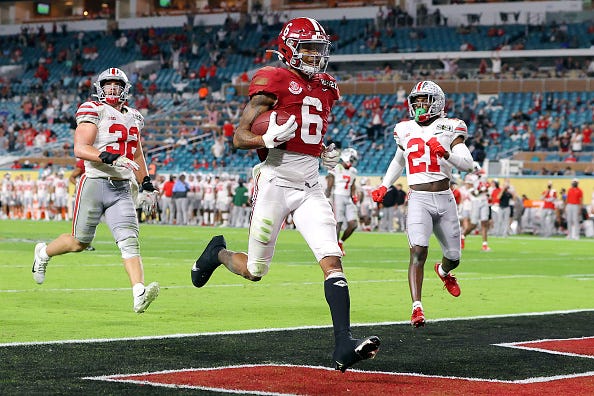 The Eagles passed on Rookie of the Year Justin Jefferson last year and selected Jalen Raegor instead, who did not quite live up to expectations. Philadelphia would be hard-pressed to pass on an elite wide receiver in the first round again and the idea of putting Smith in an offense with Jalen Hurts is salivating.

The one thing that may give the Eagles pause is Raegor is already considered an undersized receiver, and drafting Smith would be doing the same thing two years in a row. But Smith could give them an explosive vertical threat reminiscent of DeSean Jackson’s prime in Philly. 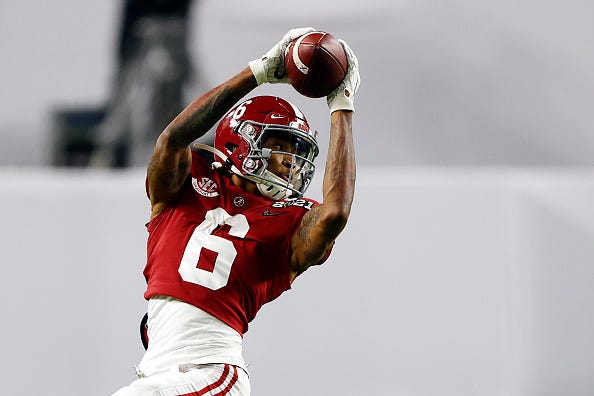 It is entirely possible the Bengals could be in position to draft back-to-back Heisman Trophy winners in Joe Burrow and Devonta Smith. The latter would give the Bengals an explosive receiving corps alongside Tee Higgins and Tyler Boyd.

Of course, the Bengals could go other routes as well, including reuniting Burrow with his former LSU teammate Chase or drafting an offensive lineman. But creating a Heisman connection ain’t too shabby, either. 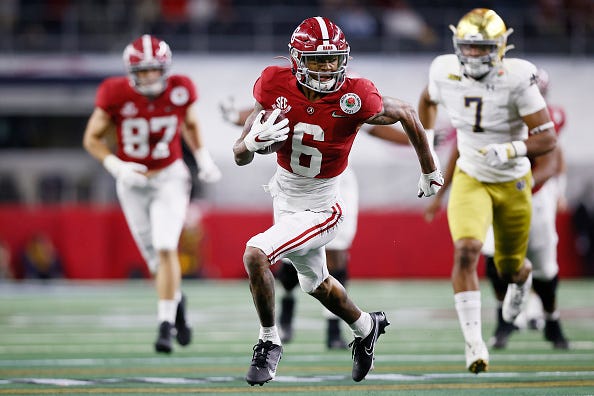 There are a handful of different directions the Lions could go, but Danny Amendola could retire and it is likely Detroit could lose one, if not both, of Kenny Golladay and Marvin Jones Jr. in free agency. Regardless, the Lions will be looking for receiver depth at some point in this draft and if Smith is there at the No. 7 pick it seems like a no-brainer.

The Lions have a new quarterback in Jared Goff and pairing up a veteran with Super Bowl experience with a talent like Smith seems like a good foundation to build on in Detroit. 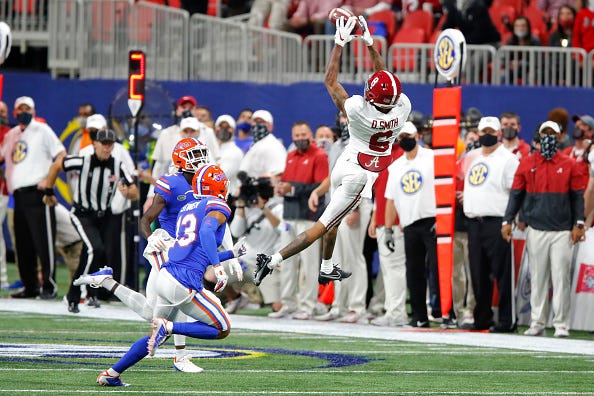 The Giants are not selecting until the No. 11 pick, so they likely have a better shot at his teammate, Jaylen Waddle, but there could be a flurry of trades at the top of the draft as teams gun for their franchise quarterbacks.

If so, things could potentially shake out where Smith falls out of the top 10 and the Giants could be waiting there to scoop him up. Smith would be an ideal fit for a Giants squad that has lacked an elite wide receiver since trading Odell Beckham Jr. Big Blue appeared to make strides last year and putting Smith in an offense with Saquon Barkley should only help quarterback Daniel Jones moving forward.