Drew Brees was happy to be a part of NBC's "Football Night in America" ahead of Week 1's Chicago Bears-Los Angeles Rams game, rather than preparing to face three-time Defensive Player of the Year Aaron Donald.

The future Hall of Fame quarterback says he still has nightmares thinking about playing against Donald, adding that the six-time All-Pro doesn't beat around the bush with his trash talk:

Drew Brees on Aaron Donald: “I’ve actually heard him say to offensive linemen, ‘You have no chance.’”

Any quarterback that has faced Donald probably doesn't look back fondly on having to evade the seven-time Pro Bowler. However, Brees is particularly qualified to talk about how dominant that Donald is, given that he tore a ligament in his thumb in the Saints Week 1 game against the Rams in 2019:

Brees is far from the only decorated quarterback to compliment Donald. Last postseason, Hall of Famer Troy Aikman -- who had to face Lawrence Taylor and Reggie White quite frequently in his career -- said that Donald is the best defensive player that he's ever seen. 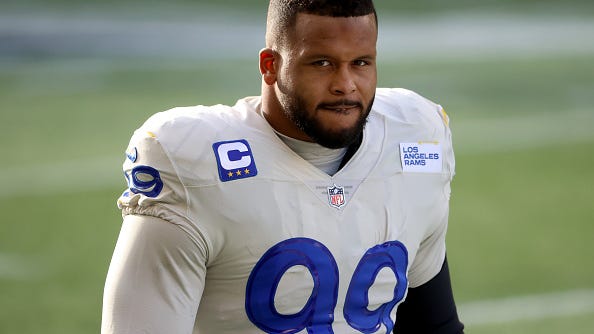