New York Giants fans are (im)patiently waiting to see star running back Saquon Barkley break linebackers' ankles, power through defensive linemen, hurdle over and outrun the secondary and make magic happen on the football field in every way imaginable. Even nine-yard, non-first downs are masterpieces out there on the gridiron when the Penn State product is involved.

But more than anything else, New York Giants fans just want to see Barkley... period. They want to see him on the field. Whether it's a one-yard loss or a 70-yard touchdown, his presence in the backfield is of the utmost importance, especially considering he played in just two games last year and may not be entirely ready once the 2021 season rolls around. He's already been placed on the Physically Unable to Perform (PUP) list, where a player can be activated at any time during training camp but will be inactive for the first six weeks of the season if they're still on the list when the roster is cut down to the final 53. 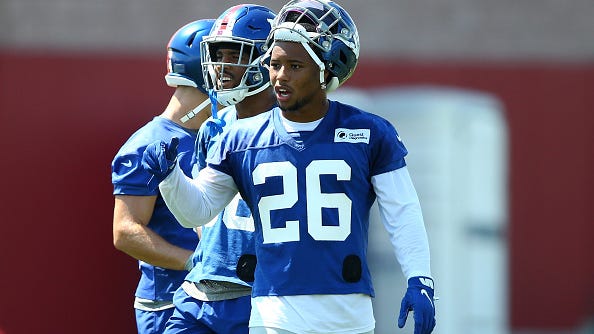 Saquon Barkley on when he will be ready to practice or play: 'I don't have an answer'

For head coach Joe Judge, the long-term approach is much more important than rushing him back out there, though it would certainly be nice to see him for a full season's worth of production. But if that can't be the case due to what's best overall, that won't be what happens.

"We're thinking long term with Saquon; long term in the season, long term in his career," Judge said (via Jordan Raanan of ESPN). "And by taking care of him individually, that is going to help our team long term as well. We're going to make sure when we get him out there we can keep him out there.

"And we've got to make sure we do the best thing for him as we go along the way and make sure we make decisions based on his body and not some artificially anticipated timeline. When he's ready to go, that is when he's going to be out there."

Judge isn't saying when he's expecting Barkley to return, though the head coach likes what he sees in terms of progress.

"The biggest thing with Saquon is he's made a lot of gains," Judge said. "He's done everything we've asked him to. I know that he's chomping at the bit to get out there, and you watch him out there rehab on the field, this guy is getting better every day."

When he returns, it will make a world of difference for the Giants offense. Prior to the 2020 season in which he was injured in Week 2, Barkley had averaged 119.6 yards per scrimmage over the 29 games in which he'd appeared. The list of players with more yards from scrimmage over their first 29 career games isn't very long, and it's filled with some very, very impressive names (via Stathead):

Barry Sanders, sitting at No. 12 on that all-time list, thinks that Barkley is just "scratching the surface." Watch the video at the top of this page to find out why!