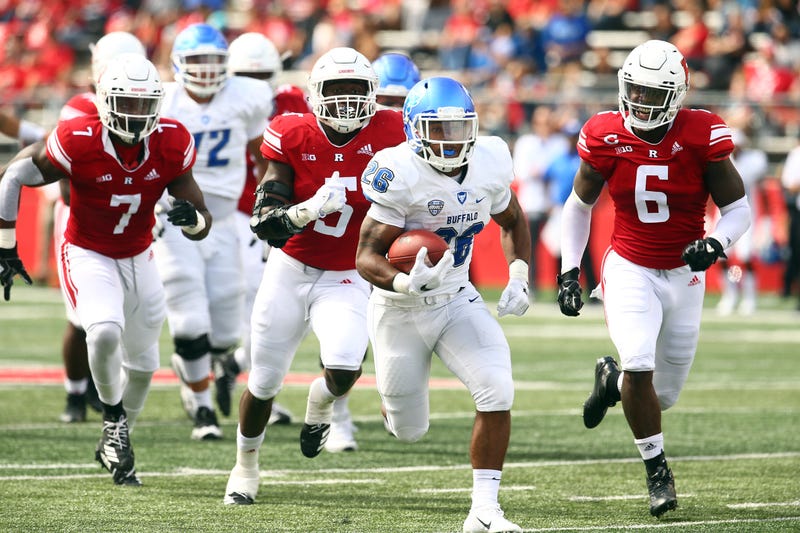 Despite going undrafted at the 2021 NFL Draft in Cleveland, Ohio, former University at Buffalo running back Jaret Patterson has found a home in the National Football League as an undrafted free agent. He has signed a contract with the Washington Football Team.

Jaret Patterson has signed a free agent contract with the @WashingtonNFL!#UBhornsUP | @__JP26 pic.twitter.com/YnabzQcu1M

It was already written!! Thank you god!! pic.twitter.com/DmGLrnYmxh

According to NFL.com's position tracker at running back, Patterson was the highest-graded running back (5.98) remaining on the board at the end of the draft. He graded the same or higher than eight running backs who happened to be drafted at some point over the weekend.

"Good luck knocking this bowling ball of balance and power off his feet with a single blow. If you love production and competitiveness, Patterson is your guy," NFL Draft analyst Lance Zierlein wrote of Patterson at NFL.com. "He might be short but he's plenty stout and creates a chunk of his production after contact. Besides breaking tackles, he offers decent speed to the edge and downhill elusiveness to find his own yardage when necessary. He sees the field well but can be a little hesitant in buying into certain running lanes and his choppy running style delays his burst through the line of scrimmage. He lacks pass-catching production but his courage and technique in protection was eye-opening. Some of the gargantuan production came against weaker defenses, but 'hard to tackle' is a translatable trade and could make him a three-down backup."

The 21-year-old is, arguably, one of the best players to come out of the UB Football program, rushing for 3,884 yards and 52 touchdowns in 32 games over the span of three seasons in Amherst.

Patterson had a historic season in 2020 in just six games for the Bulls, leading the nation with an average of 178.7 yards per-game. He also finished the season tied for second in the nation with 19 rushing touchdowns, matching his career-high with the program.

In the team's five regular season games this season, Patterson rushed for 1,025 yards, which tied the FBS record for the earliest time for a player to reach 1,000 yards in a season. He finished the campaign with 1,072 rushing yards, become the first player in program history to rush for 1,000 in his first three seasons.

With the production he put up in the 2020 season, Patterson earned some high honors as the MAC Offensive Player of the Year, while also earning the Vern Smith Leadership Award, given annually to the top player in the conference.

In addition, Patterson was named as a First-Team All-American by USA TODAY, while also being named a Second-Team All-American by the Associated Press. He became just the second Bulls player in program history to be named an AP All-American at the FBS level, joining pass rusher Khalil Mack, who earned the honor in 2013.

There ended up being only one player from the UB Bulls that was drafted this past weekend at the NFL Draft. That player was edge rusher Malcolm Koonce, who was a third round pick (79th overall) of the Las Vegas Raiders.

With the 79th pick in the 2021 NFL Draft, the @Raiders select Malcolm Koonce!#UBhornsUP | #ForeverABull pic.twitter.com/tMJUI0LvGe