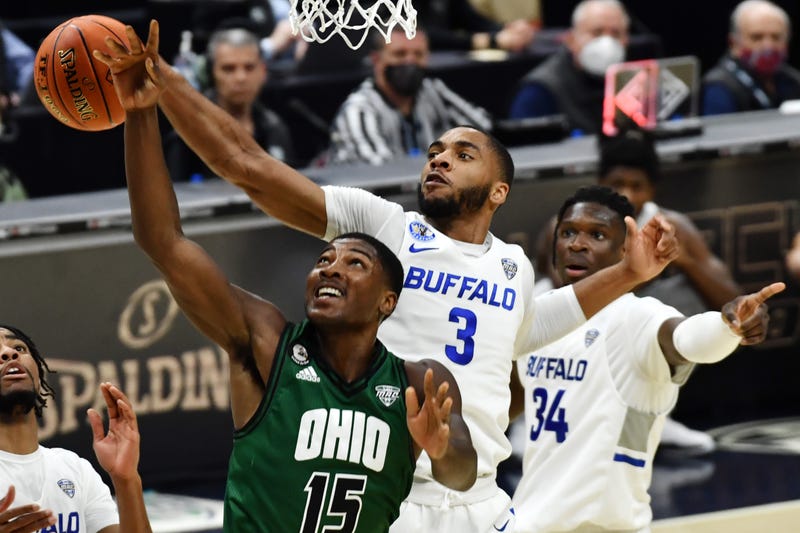 The University at Buffalo men’s basketball team’s run in the Mid-American Conference Tournament came to a disappointing end Saturday night, as the Bulls fell to Ohio University in the championship game, 84-69.

The No. 5 seed Bobcats were the better team the entire night, taking it to the No. 2 seed Bulls right from the opening tip-off. Ohio built a comfortable lead early, holding a 20-7 advantage by the second media timeout of the first half. By halftime, the Bulls found themselves down 20 points, 41-21, their largest deficit of the entire game.

Buffalo managed to cut Ohio’s lead to 10 points in the second half. Ronaldo Segu hit a three-pointer to make it 52-42 with 10:25 left. The Bobcats immediately went on a 9-0 run over the next 2:24, seemingly putting the game out of reach.

The Bulls did show some fight down the stretch, but Ohio was able to quickly answer every Buffalo basket or mini run; quickly thwarting any sort of shift in momentum that could help UB put together a comeback.

Segu led all scorers in the game with 24 points, while also finishing with two assists and two rebounds. Buffalo’s Josh Mballa got off to a hot start, scoring 11 points in the first half. The junior forward cooled off in the final 20 minutes, scoring just five points in the second half to finish with 16. Mballa also grabbed a game-high 11 rebounds; his third consecutive double-double in the MAC Tournament and ninth overall this season.

Jayvon Graves and Jeenathan Williams both had relatively quiet nights offensively, finishing with 13 and 9 points respectively. Graves, however, did slide himself up a spot on Buffalo’s all-time scoring list, moving into seventh place with 1,424 career points.

The Bulls, now 16-8 overall, will have to wait and see what their postseason fate will be. An NCAA Tournament berth is unlikely, but Buffalo could certainly be bound for the National Invitation Tournament (NIT), or the College Basketball Invitational (CBI).

As the MAC Tournament Champions, Ohio is headed back to the NCAA Tournament for the first time since 2012. As a No. 13 seed, the Bobcats upset No. 4 seed Michigan and No. 12 seed South Florida before losing to No. 1 seed North Carolina in the Sweet 16.

The 68-team bracket for the 2021 NCAA Men’s Basketball Tournament will be revealed during the annual selection show on CBS, which is scheduled to begin at 6 p.m. EST on Sunday, March 14.