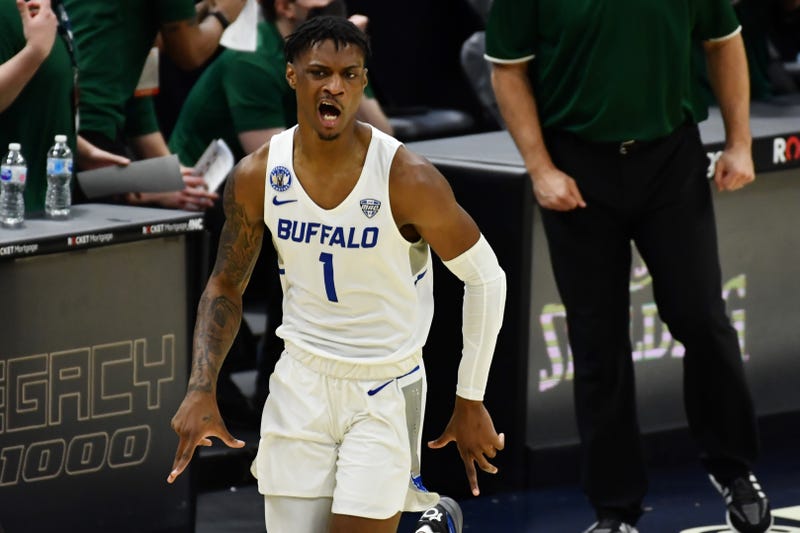 The University at Buffalo men's basketball team saw its season come to a heartbreaking end Friday night in the first round of the National Invitation Tournament.

A layup by Isaiah Stevens with just 1.2 seconds left gave top-seeded Colorado State a 75-73 victory. A Hail Mary pass on the inbound by the Bulls was picked off by the Rams and the clock ran out on Buffalo's 2020-2021 season. The game was tightly contested, featuring 10 lead changes and nine ties.

The game was tied for the ninth time when UB’s Laquill Hardnett hit a three-point field goal with 14 seconds left. However, Stevens was able to get around UB's Ronaldo Segu, and drove to the hoop for the game-winning basket.

The Bulls, who finish the season 16-8, had four starters finish in double figures, led by Jeenathan Williams’ 21 points; Hardnett added 12.

It was a rough shooting night for Segu and Jayvon Graves as the pair shot a combined 8-for-22 overall and just 2-for-10 from three-point range. Graves finished with 12 points, and completes his UB career with 1,436 points, which is seventh all-time in school history. Josh Mballa added 10 points and nine rebounds.

The Rams also had four starters score in double figures. 6-foot-5, 252-pound sophomore David Roddy was too tough down low for UB’s defense, and he led CSU with 17 points. Roddy is why the Rams had a 44-38 edge in points in the paint.

UB rallied to create the drama at the end of the game. The Bulls had a scoring drought in the second half last over five minutes, where they missed nine-straight shots. The Bulls were outscored 15-1 in that stretch, and went from leading 50-44, to trailing 59-51, their largest deficit of the game.

UB then turned the tables on Colorado State and produced an 11-0 run of their own to go back up by three points, 62-59. Colorado State then outscored UB 12-6 over the next 3:30, setting the stage for the Hardnett three-pointer, and the Rams' game-winning layup.

The Bulls were making the school’s second-ever appearance in the NIT. Colorado State advances to play North Carolina State in the second round.