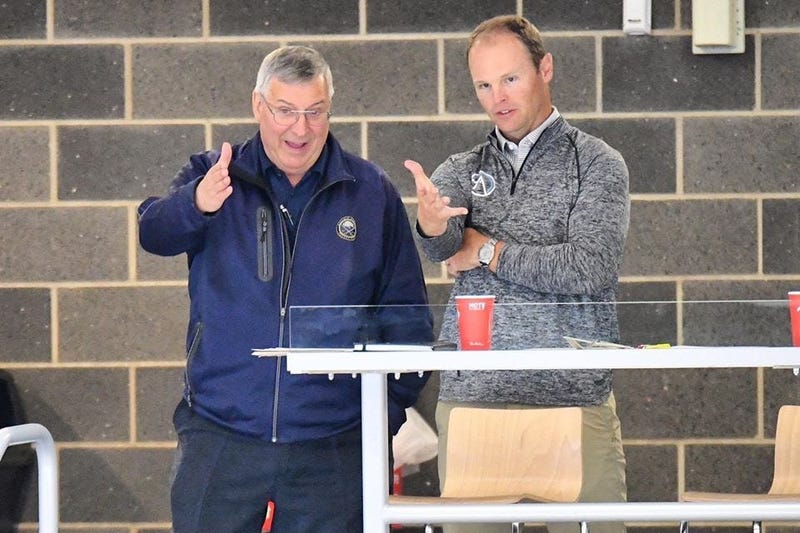 The last time Kevyn Adams spoke to the Buffalo media this summer, it was shortly after he was hired by owners Terry and Kim to be the new general manager of the Sabres, replacing Jason Botterill. While he was introduced as the team's new boss for the hockey operations department, Adams was also tasked with completely overhauling that department as he let go of 22 staff members over a short period of time.

Nearly two months later, Adams was back speaking to the media via a Zoom conference call, but to mainly chat about his first new hire as the general manager in Buffalo.

"It was a really enjoyable process for me, to be honest," Adams said during his Zoom conference call on Tuesday. "I really looked at this as we were in a unique time where we did have more time to go through this. Typically the NHL and professional sports in general, everything happens really fast and moves fast. I felt that I had the luxury of time to really go through this process methodically. I interviewed a lot of people from all over the hockey world with different backgrounds from [juniors] to college, to Europe, the American League, NHL, you name it, I talked to them. I really enjoyed it but for two reasons. One - I learned a lot. I took away something from every single one of those conversations. And two - I got to just know people and ask questions. I really enjoyed it. I'm glad we were able to go through it.

"I narrowed it down, Ralph got involved as well and he spoke to different candidates, and we worked on it together and spoke together to people. This was quite a process that we went through."

The 46-year-old Appert spent the last three seasons in Plymouth coaching the Under-18 Team and Under-17 Team at the USNTDP, where he lead and helped develop some of the best young American players in the nation. In his first season with the USNTDP coaching the Under-18 group, Appert led the team to a gold medal finish at the Five Nations Tournament, and also a first place finish in the Eastern Conference of the United States Hockey League with a 41-18-0-1 record.

Even when speaking with all the possible candidates for the head coaching job in Rochester, it was a mutual feeling all around at the top of the organization that Appert was the man for the job.

"Seth, to me, just kept rising to the top," he said. "In terms of his communication skills, his development background, he's had a chance at a program where he's taken 20 of the top players in the country at critical [moments] into their draft eligible years and working on a development plan for how you help those players get better. It just seemed to line up philosophically with where we were heading as an organization, and there was a natural synergy between myself, Ralph and Seth that we all felt."

"Really excited that he's going to be our new head coach in Rochester. He's a quality person, high character, great leader, he has a track record for development. I believe that he's going to be someone who will be a great role model for our prospects as they learn on and off the ice. It's not just what happens on the ice, because the young pros need to learn what it takes to do the right things away from the rink. Obviously you know his background and what he's done, so I believe he's going to be a great fit."

When speaking with the Buffalo media on Tuesday, Appert was very keen on the values of winning and development being key focal points to success in the American Hockey League. He also said, "if winning comes first, there's place for comradery and social opportunities to be teammates. That's also how you bond and build that team spirit that's critical to having team success."

Those values seemed to be very similar to what Chris Taylor valued in his three seasons as the bench boss in Rochester.

The Amerks put up a combined 116-65-20-13 record in 214 games under Taylor and ended up heading to the Calder Playoffs twice. Taylor also had Rochester in position to make the postseason for a third consecutive season with a 33-20-4-5 record in 62 games before the 2019-20 season was canceled due to the COVID-19 pandemic.

It seemed that Taylor had established that winning culture in Rochester, where players were able to still develop into suitable players at the National Hockey League level with the Sabres. A player like Victor Olofsson was the prime example of success in the AHL, as he is now a top-six forward with the Sabres for seasons to come in Buffalo. Meanwhile, other players like Rasmus Asplund, Tage Thompson, Casey Mittelstadt, Curtis Lazar, C.J. Smith, Jacob Bryson and Will Borgen have all shown flashes of potential and are currently, or will have an impact at the NHL level in the very near future.

When asked about the reasoning behind the firing of Taylor and what the message is going forward in both Rochester and Buffalo, it seemed the decision was more of a "new start" initiative, and that the goals in Rochester should be with the mindset of development and winning.

"I want to be very clear on this: I don't think it's one or the other. I do believe that our goal as an organization is to win a Stanley Cup, and everything that happens within our organization needs to help us take a step towards that goal," Adams explained. "When I talk about development in Rochester, I'm talking about how do we personally invest in every single one of our prospects and players and put them on a track to succeed, certainly knowing that not every single player that plays in Rochester is going to win a Stanley Cup with the Buffalo Sabres some day, or even make the NHL. If we do that and we're putting these players in a position to succeed, it will have success in Rochester as well, and in Buffalo.

"I think winning is really important in terms of philosophically, as a professional athlete, every single time you step on the ice you should compete and you should strive to win games. I don't really look at it so one or the other. I look at it as it's part of the puzzle, but what I want to make sure I'm clear on is our goal in Rochester is to develop players into National Hockey League players, and in a perfect world you do both."

As for the progress that Adams has made this offseason towards preparing for the 2020-21 season, he is still evaluating the roster and the players to see where how they will contribute to the Sabres and Amerks. One thing that Adams believes is important for the organization heading into next season is to figure out where each player can be slotted and how well they fit together and sync up.

"We have a lot of really good players here, and Jason and his staff before did a great job in terms of building depth in the organization," Adams said. "What we want to be able to do when you first look at Rochester, you want to give your prospects the ability to be challenged, to get meaningful reps and meaningful minutes to improve. Just from my personal experience, I really do believe when you're put in challenging situations, that's how you get better. You may not always actually be successful, but taking that faceoff with 30 seconds left and up a goal, trying to protect the lead is something that you have to feel, you have to go through that. That's something that we want to look to build organizationally.

"In terms of taking that from Rochester to Buffalo, it's really, really important to get your team at the NHL level slotted, where players are in roles that they're comfortable in and can succeed in, but also gives your team the ability to match up. How you can match up with other teams' top lines or top [defensive] pairs or how all those things flow is the roster construction that's needed to put the team together. That's certainly something that we're looking at. We're looking very closely at the players we have, how they fit together, what they do for us day-in and day-out. As you then take in all the new information, and in terms of data and analytics and you try to condense it into what matters most, it's trying to put people in a position to succeed in terms of your Sabres lineup right through down into your Rochester lineup. Then ultimately, team success should follow if you're putting players in the right spots."

Adams also did mention that he is still looking at possible additions to his front office staff, though he is not looking to fill any specific role. Instead, he is looking for "the right people that fit" into what the organization is trying to do going forward.

When Adams first spoke with the Buffalo media back in June, he did mention that he had spoken to Sabres captain Jack Eichel, as well as having a brief conversation with him along with the Pegulas. Since those conversations, the two have been exchanging notes and getting to know one another as it will be important to keep the franchise center in the loop going forward with these changes.

"I think he's starting to get to know me, just in what we're doing here," Adams said. "I've spent time talking to his agents as well, and then just look forward to building that relationship. I'll keep the conversations private, but I think, from my standpoint, he is our franchise player, he is our captain and it's really important that he understands what we're doing here. He obviously has a great relationship with Ralph, and now it's time for me to build that as well."

One other note that was brought about to Adams on Tuesday was the interesting situation with defenseman Brandon Montour.

However, Adams said that this talk was new to him and that it's something the team has not even talked about.

"The focus for me in the beginning here has been internal, getting to have conversations with our players, our staff," he said. "I've spent a lot of time with the coaching staff discussing our players, our roster, spent a lot of time myself watching our team. The reason why the coaching piece was so important was it's not fair of me to evaluate certain players or all of our players if I don't know exactly what the coaches are looking for or the principles that we want to play by. That's been a great process to go through, and all of our conversations regarding Brandon have been very positive from the coaching staff and myself included."

You can listen to the entire conference call below: