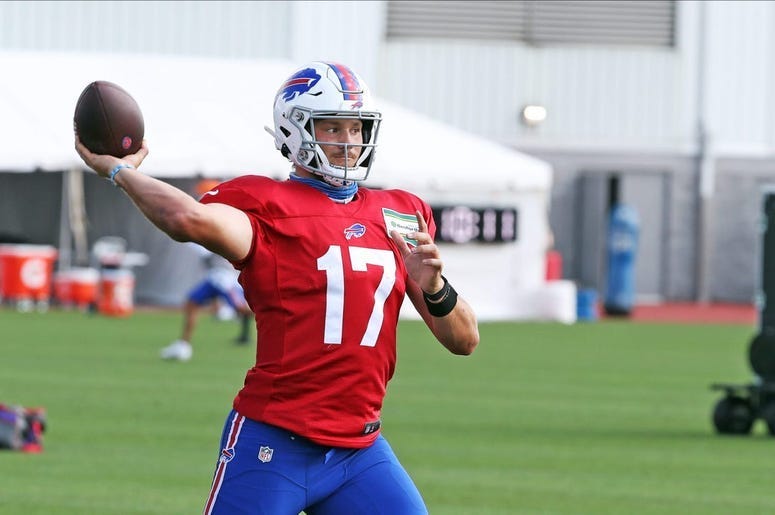 Buffalo Bills quarterback Josh Allen, along with defensive tackles Harrison Phillips, Quinton Jefferson, and Vernon Butler were all back on the field on Monday, one day after having to miss due to a false-positive COVID-19 test results.

-- Sal Capaccio -- (@SalSports) August 24, 2020 While Allen and his teammates returned to the field, running back/special teamer Taiwan Jones was out with a knee injury suffered during Sunday's session, and running back Christian Wade missed with a quad injury. Cornerback Josh Norman missed practice once again with a hamstring injury.

Rookie wide receiver Gabe Davis continued to impress on Monday, regardless of situation. In individual position work, he climbed the ladder to make an excellent catch over the middle:

In 1-on-1 work against defensive backs, he beat All-Pro cornerback Tre'Davious White for a touchdown, described well here by Matt Bov?:

Not to sound like a broken record, but Gabe Davis continues to impress. He won a 1-on-1 battle with Tre White, boxing out White to bring down an over the shoulder deep ball. Davis' size is noticeable on those types of plays #Bills

In 11-on-11, Davis made several catches, including one run-after-the-catch to gain big yardage.

Allen missed a couple throws early in practice that fell incomplete. As the session went on, he made better throws and overall plays, including a dart to John Brown for a short touchdown.

The offensive line did not have its best day. Bills quarterbacks were under pressure a little too often.

Of course, the defense has something to do with all of this, and this is a good defense that Allen, the line, and entire offense are facing on a daily basis.

Things got physical between the receivers and defensive backs during their 1-on-1 session, but in a good way. No pushing or fighting, but a lot of physicality at the line of scrimmage by the defensive backs and good counters by the receivers to get loose. Both sides benefited from a hard, spirited session.

After Tyler Bass had his day to kick field goals on Sunday, it was Stephen Hauschka's turn on Monday, and the veteran was perfect on all five attempts, hitting from 33, 39, 42, 45, and 54 yards out.

Practice ended with wide receiver/kick returner Andre Roberts making a beautiful catch for a touchdown, against Siran Neal, from quarterback Matt Barkley. Roberts laid out to catch the ball and brought it in before it touched the ground.

The team will be back on the field Tuesday and head coach Sean McDermott said the team will scrimmage inside the stadium on Thursday.