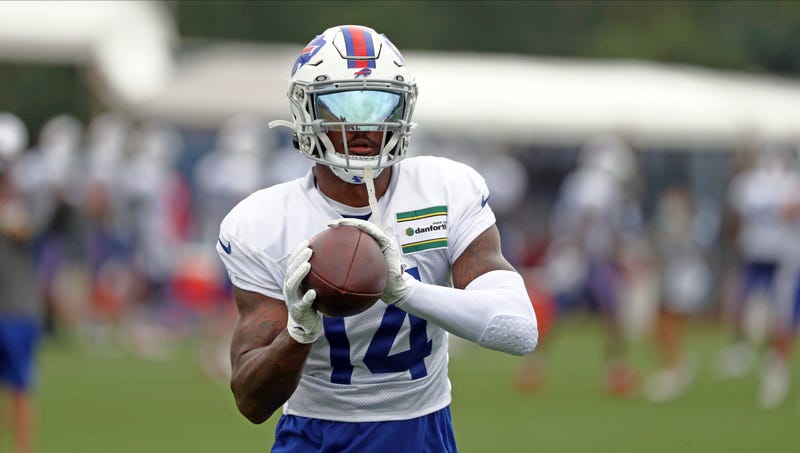 If there were any questions about the chemistry between Josh Allen and wide receiver Stefon Diggs, those questions were answered on Tuesday when the Bills' quarterback hooked up with his marquee wideout over and over again.  The Allen-to-Diggs connection was on full display during multiple 11-on-11 offense against defense series.

The Bills traded multiple draft picks in this year's draft, including their first round choice, in order to acquire Diggs from the Minnesota Vikings.

Cornerback and University at Buffalo product Cam Lewis had a noticeable day. The 2018 undrafted free agent made two big plays back-to-back. First, he had an excellent pass breakup on a pass intended for Isaiah McKenzie, then on the very next play he punched the ball loose from McKenzie after he caught it for a defensive recovery.

Every year, there seems to be a player who no one pays much attention to and fans consider just a camp body, but starts to be noticed and has a legitimate chance to make the final roster.  After a little over a week of watching practices, for me that player this year is defensive end Bryan Cox, Jr.. Yes, the one whose dad was one of the most hated Bills' rivals while playing for the Miami Dolphins during the 1990s Super Bowl years.  Cox, Jr. has shown that he knows exactly how to play the position.  Whenever he's on the field, he seems to be in the right spot.  Cox, Jr. has played 24 regular season games in three NFL seasons with the Panthers and Browns.

Gabriel Davis, whose been getting. lot of attention for his play this camp told the media vis a Zoom call after practice that he prefers to be called "Gabriel" instead of "Gabe," because that's what his mother likes.

On the field, Davis didn't particularly stand out on Tuesday as he had been in previous practices, but fellow rookie Isaiah Hodgins flashed a couple of times with good catches, using his height on one to go up and get a ball only he really had a chance to grab.

Here's some video of Davis catching a TD pass from Allen during the warmup portion of practice, as well as some other shots:

Great to be shooting Football. Here are a couple camp highlights I like. First is a great over the shoulder catch by Gabe Davis from Allen. Second is Allen to Diggs. Diggs loves the route and timing of throw. He is pumped. They seem to be working well together @news4buffalo pic.twitter.com/Zl3p8ebr2C

The team will be back on the field Wednesday and head coach Sean McDermott said they will scrimmage inside the stadium on Thursday.