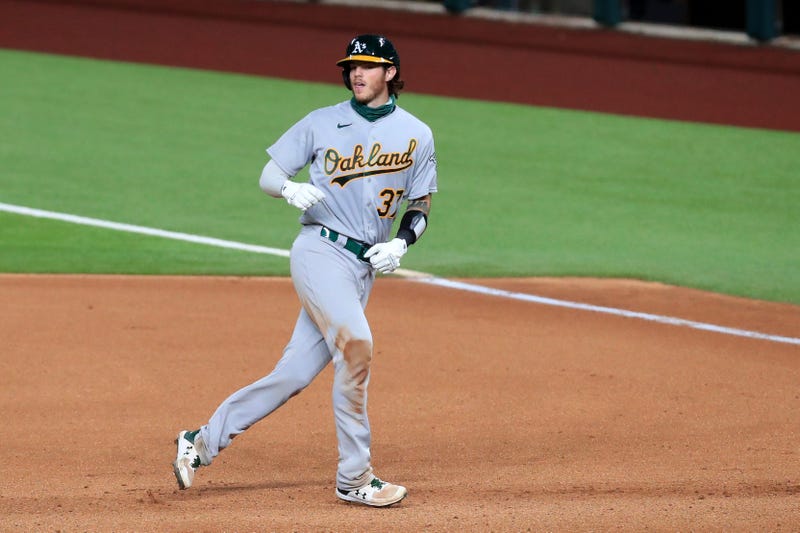 It was a memorable Major League Baseball debut for Amherst native Jonah Heim on Tuesday, as he went 1-for-3 for the Oakland Athletics in a 10-3 win over the Texas Rangers at Globe Life Field in Arlington, Texas.

After being called up by the A's from their alternate site on Monday, Heim got the start at catcher for Oakland as the team played in Game 2 of their series against the Rangers.

Batting in the ninth spot in the batting order, Heim drew a four-pitch walk in his first-career at-bat in the top fo the third inning. With the score at 3-1 in the top of the fifth inning, Heim grounded out to the pitcher but was able to advance the runner that was on first base. That helped set up a two-run home run for the next batter, Marcus Semien, who gave Oakland the 5-1 advantage.

In the seventh inning, Heim went to the plate with a runner on and picked up his first career hit, a single to left field that advanced Tony Kemp from first to third.

Later in the inning, Heim was able to score from third after designated hitter Mark Canha was hit by a pitch with the bases loaded. That made the score 7-3 in favor of the Athletics.

In his final at-bat of the night in the top of the eighth inning, Heim ended up fouling out to the catcher.

The 25-year-old catcher was originally drafted by the Baltimore Orioles in the fourth round (129th overall) of the 2013 MLB Draft, just before he graduated from Amherst High School. He signed a professional contract shortly thereafter and went to play his rookie ball in the Gulf Coast League.

At the MLB Trade Deadline in 2016, the Orioles traded Heim to the Tampa Bay Rays while he was playing Class A-Advanced ball with the Frederick Keys.

Following the 2017 season, where he had worked his way up to the Rays' affiliate Bowling Green Hot Rods in Class-A ball, Heim was traded again, this time to the Athletics. From there, he really started to climb the ranks of minor league baseball and found himself playing Triple-A ball by the end of the 2019 season with the Las Vegas Aviators.

Oakland will wrap up their series with the Rangers on Wednesday night with first pitch set for 8:05 p.m. in Arlington.