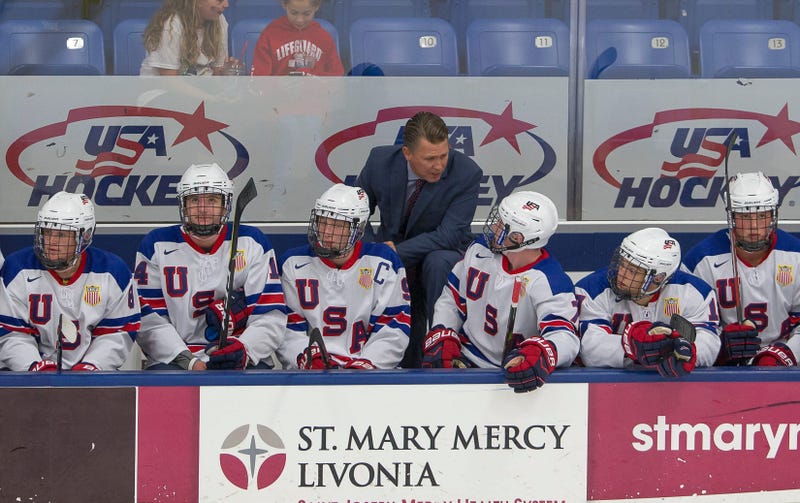 The path to the American Hockey League for Seth Appert has certainly been an interesting one.

A former goaltender at Ferris State University, Appert decided to go into coaching just one year after his final season with the Bulldogs in the 1995-96 season. He joined George Gwozdecky's staff as an assistant coach in 1997, where he won back-to-back National Championships with the Pioneers in 2004 and 2005. Following the 2005-06 season, Appert was hired to be the head coach at Rensselaer Polytechnic Institute, where he spent 11 seasons as the bench boss and made an NCAA Tournament appearance in 2011.

After being fired by RPI in 2017, Appert joined the United States National Team Development Program (USNTDP) and spent three seasons in Plymouth, Michigan split coaching between the Under-18 Team and Under-17 Team.

In 2020, Appert is making his first jump to professional hockey to become the 33rd head coach of the Rochester Americans.

"I'd like to thank Terry and Kim Pegula, Kevyn Adams and Ralph Krueger for their belief in me to be the head coach of the Rochester Americans and for the responsibility they have given me in developing people and players for the Buffalo Sabres organization in pursuit of organizational excellence," Appert said in his opening statement with the Western New York media via a Zoom conference call on Tuesday.

"I've spent a lot of time in Western New York and in Upstate New York. I have a real appreciation for the people of this area, for the fanbases, for the passion and excitement, and expectations that the fanbases of both the Americans and the Sabres have, and I'm eager to deliver on those expectations. More contrastly, over the last three years, I have a real passion for teaching, development, and helping people chase their goals and dreams. I'm excited to do so for the Buffalo Sabres, while continuing to build upon the winning culture of the Rochester Americans."

It was a bit of a head-scratching decision at the time as Rochester was in position to make the Calder Cup Playoffs for a third consecutive season with a 33-20-4-5 record in 62 games before the 2019-20 season was canceled due to the COVID-19 pandemic. In Taylor's three seasons in charge in Rochester, his team finished with a combined 116-65-20-13 record in 214 games and two postseason appearances. However, the Amerks never won in the playoffs under Taylor as they were swept in the opening round in both 2018 and 2019.

What Taylor had built in Rochester was a winning culture, where players were able to develop at the AHL level into suitable players at the National Hockey League level with the Sabres. A player like Victor Olofsson was the prime example of success in the AHL as he is now a top-six forward with the Sabres for seasons to come in Buffalo. Meanwhile, other players like Rasmus Asplund, Tage Thompson, Casey Mittelstadt, Curtis Lazar, C.J. Smith, Jacob Bryson and Will Borgen have all shown flashes of potential and are currently, or will have an impact at the NHL level in the very near future.

With Appert now coming into the picture in Rochester, it will be important for him to start setting the groundwork for what is to come for the future of both the Amerks and the Sabres.

"I think you first start with building relationships and building trust," Appert said. "I think any time that you're trying to help young men chase their goals and dreams and you're trying to get them to improve in any area of life, right now specifically in hockey to try to get ready to play in the National Hockey League and have a career in the NHL, you need to build relationships that are based on trust so that those players understand that what we're doing is trying to help their career. We're trying to give them opportunities through the habits that we're creating on the ice, the work ethic, the competitiveness that we're building on the ice to allow them to chase their dreams of playing in the National Hockey League.

"We're tasked, I'm tasked with developing players for the Buffalo Sabres so they can try to chase down a Stanley Cup. That's my job. At the same time, I'm tasked with winning in Rochester. There's a balance to that, and there's an honesty that you have to have in your conversations with your players about the things that need to be done to be a winning franchise in Rochester, but the things that need to be done in the for the good of the organization in chasing that organizational excellence. So, to me, it comes down to relationship building, especially with the veterans, building a leadership group that I can trust and they can come to me when there are those issues, and just having those honest conversations about what we're trying to do together."

For someone that has never had a crack at coaching in professional hockey, it is certain that Appert will have plenty to learn when dealing with players at the professional level. However, Appert says that the past three years at the USNTDP was key for him in getting ready to take that next step in his career as a head coach in the AHL.

"Coaching at the National Program the last three years uniquely prepares our head coaches for that balance of development and winning. We're tasked with that on a daily basis," he explained. "We're tasked with developing America's best players, but also it is important because winning is part of development. So I think over the last three years, I've walked that balance on a daily basis, the balance of giving them the habits and the practice repetitions and the freedom of decision making that's necessary for development on the ice, while also emphasizing that winning is important. I think there is going to be a lot of parallels between what we've done with the National Team and what's going to happen in the American Hockey League. Certainly there's going to be things that I'm not prepared for, and I'm going to have to adjust along the way because I don't have that experience in pro hockey, and that's where I will lean on the coaching staff of the Buffalo Sabres, Ralph Krueger and his assistants, Kevyn Adams, and my future assistant coaches to help guide me in those areas."

"Winning needs to come first. Winning and development needs to be the first thing on all of our minds from the players and coaches to the support staff, everybody, and if winning comes first, there's place for comradery and social opportunities to be teammates. That's also how you bond and build that team spirit that's critical to having team success."

On top of using what he learned at the USNTDP and working with young prospects developing into professional players, Appert was able to reflect and learn from his time coaching the RPI program. In his 11 seasons coaching the Engineers, things didn't always come easy for Appert. He led the team to an appearance in the NCAA Tournament in 2011, but only led his group to a 152-221-48 overall record and just four seasons with win percentages higher than .500.

However, the one thing that he took away from his experience that he carried over into the USNTDP and into Tuesday's conference call was "adversity fuels growth."

"I'm really proud of what we did at RPI. Most of the chunk of years we were there was extremely successful. The NCAA tournament, highest finish in over 25 years in the ECAC, All-Americans and Hobey Baker finalists. At the end, it slipped, and that's on me," Appert said in reflection. "I'm the head coach. I believe that I lost my sense of who I was as a head coach, what I want to be in terms of a leader for our young men. I don't think I had as close of relationships with the group at the end as I did in the middle and the beginning.

"I think sometimes things [can get] stale over 11 years. I think sometimes at a program like RPI, there's so much that you do that isn't coaching that can grind you down that you don't ever realize. You have to fundraise tons of money to run [your program] the way you need to run it. You have to build campus relationships to be able to get kids into a school of that caliber. You have to recruit probably seven times as many kids as premier programs need to to get the kids that you get to your program. There's so many things that a program like RPI that doesn't have all these resources. The responsibility falls on the head coach. I think I got bogged down by stuff like that, programming things that's important, and lost sense of what's most important, which is people. The relationships, the trust; those trusting relationships you build with your players allow you to have honest, hard conversations with them when they're not doing things that they need to be a great player. I lost that. Not for long, it was just at the end, but I did."

It wasn't until Appert joined John Wroblewski's staff as an assistant coach with the Under-18 Team at the IIHF Under-18 World Championship where he found that passion again to coach and continue to pursue his career.

"[It was] guys that are now borderline superstars in the NHL like Brady Tkachuk, Quinn Hughes, Josh Norris and players like this; how embracing they were of me and how excited they were to have another coach on board, that kind of re-instilled my love and passion and got me reset on what I wanted to be as a coach," Appert said.