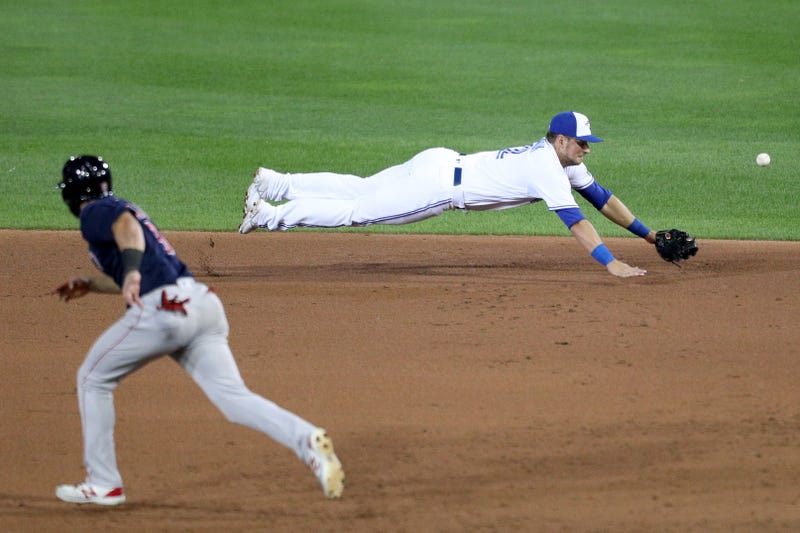 There haven’t been many nights for the Boston Red Sox to celebrate in this shortened baseball season, but Tuesday in Buffalo was one of them.

Boston used a monster sixth inning, in which they scored six runs, to grab their first lead of the game and went on to win the series opening game over the Toronto Blue Jays, 9-7 at Sahlen Field.

Trailing 6-3 through five innings, the Red Sox erupted in the sixth.

Jackie Bradley Jr. started the comeback with an RBI single. Then, after loading the bases, Alex Verdugo got the Red Sox within one run with a single to right field. With the bases remaining full, Rafael Devers came through with a huge bases-clearing triple down the right field line to give Boston its first lead of the night at 8-6. J.D. Martinez then hit a sacrifice fly to right to bring Devers home and the Red Sox led 9-6 through their half of the sixth inning.

Blue Jays reliever Wilmer Font gave up the worst of the sixth inning barrage, surrendering four earned runs while only getting one out.

Toronto did start the game well. In the first inning, the team got hits from lead-off man Cavan Biggio and Randal Grichuk, then Teoscar Hernandez walked to load the bases for Lourdes Gurriel Jr., who doubled off the right field wall to score two runs. Danny Jansen later got two more runs home after his single to make it 4-0 Jays after one inning.

In the fourth, after Boston had gotten to within one run at 4-3, the Blue Jays picked up a wider lead in the bottom half of the inning, as Vladimir Guerrero Jr. belted a two-run single to left field and the Jays went up 6-3. The hit for Guerrero Jr. extended his hitting streak to eight games.

With their final chance in the ninth, Jays center fielder Teoscar Hernandez hit a solo home run to right field, cutting the Sox lead to 9-7. Then, after a single from Joe Panik, the tying run came to the plate with Rowdy Tellez pinch-hitting. Tellez struck out swinging to end the game.

The win was Boston’s 10th win of the season. Only the Los Angeles Angels and Pittsburgh Pirates have worse records in the Majors.

The two teams will meet again Wednesday night at Sahlen Field at 6:37 p.m. in the second game of a three-game series.