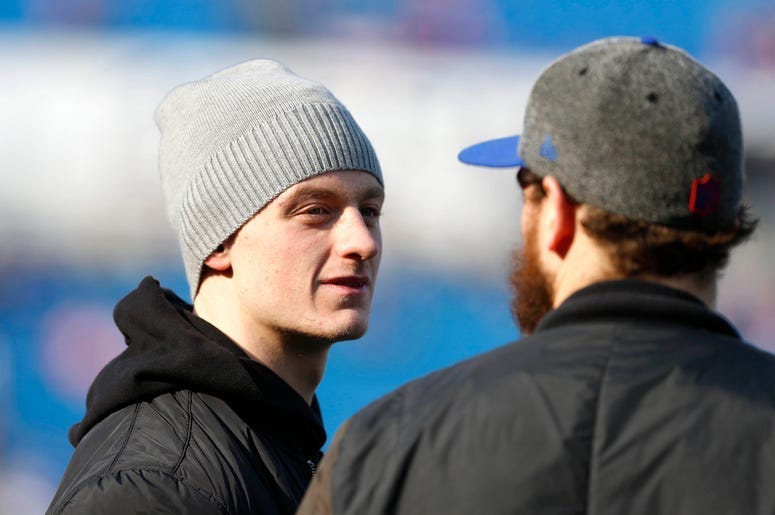 Yes, this article's title is in reference to the 2003 hit film starring Lindsay Lohan, "Freaky Friday", about a parent and child swapping bodies and living out each other's lives.

Over the course of the 21st century, Buffalo sports fans have become familiar with the idea that the Sabres are the successful child (if you will), that the Bills always have to hear about.

The Sabres were making deep playoff runs and creating a lifetime of memories for fans, while the Bills' ineptitude year-after-year created an eventual 17-year long playoff drought.

Fans used to gather in front of the, then, HSBC Arena for the "Party in the Plaza" as the Sabres made back-to-back appearances in the eastern conference finals from 2005 to 2007. Now, fans have moved over to the Buffalo-Niagara International Airport to greet the Bills coming back home from clinching playoff appearances.

Since the Bills hired head coach Sean McDermott and general manager Brandon Beane, the team went from a locked playoff miss to a team that now has the 10th-best odds at winning Super Bowl LV (according to the ESPN Football Power Index).

They have made the playoffs in two of the last three seasons as the McDermott-Beane duo has built one of the most complete rosters in the NFL.

The Bills used to be the team that felt like it was zigging, while the rest of the NFL was zagging, and not for the better of the organization. From missing on quarterbacks J.P. Losman and E.J. Manuel, to taking running back C.J. Spiller in the first round despite already having Marshawn Lynch and Fred Jackson on the roster, it never felt like any regime from top-to-bottom knew how to construct a consistent winner.

Some fans born in the late 1990s and early 2000s went their entire childhood not knowing what the Bills in the postseason was like. They never lived through the moments the Sabres gave of pure joy from a playoff game/series win, being so close to a championship that they could taste it, or even the heartbreak that would come with the end of a run. Just the redundancy of disappointment by the halfway point of the regular season. Knowing the team was likely already out of the playoff race.

There are a lot of young Sabres fans that are experiencing that same thing with the organization now in Year 9 of their own playoff drought.

Has another city ever had to deal with back-to-back, decade-long playoff droughts from their top two professional sports teams? Or in this case, their only two?

What a unique and torturous situation that has come from the Sabres' demise.

They have become the organization fans are convinced have no idea how to build a winner. The worst part about that feeling transferring from one Buffalo sports team to the next, is the fact that the Sabres have an elite, top-10 player on the team.

Jack Eichel not playing in a single important game over the first five years of his career is the stuff of nightmares. Nightmares that nobody would have predicted in 2015, even with the team at the bottom of the league, with little to no long-term building blocks on the roster.

It appears to be getting worse instead of better. The Sabres decided to keep general manager Jason Boterill for a fourth season, despite the team finishing 31st, 27th, and 25th in his first three years running the show.

They have very little offensive firepower after the top line, and limited depth across the roster. A mess of a salary cap situation and barren prospect pool doesn't offer a lot of reinforcements.

Add the off-ice blunders by the organization during the 50th anniversary celebration, and it makes fans start to ask the same questions they asked about the Bills over two decades.

Does the organization care about winning or their reputation at all?