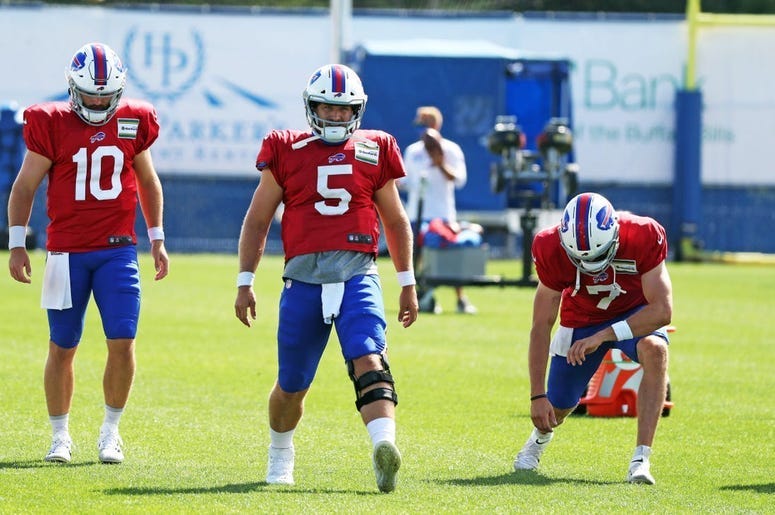 Orchard Park, NY (WGR 550) - The Buffalo Bills were back on the practice field on Sunday after a day off on Saturday. However, the team had some big names missing from team activities, most noticeably quarterback Josh Allen, along with defensive tackles Harrison Phillips, Quinton Jefferson, and Vernon Butler.
Practice was originally scheduled to begin at 10 a.m., but it was pushed back one hour. Right around that same time, the league released a statement indicating some irregularities in COVID-19 testing results coming from one lab in New Jersey.

Several NFL teams are altering or cancelling football activities today after irregularities in results from Saturday's COVID-19 test results from the same lab in New Jersey. Statement from the NFL: pic.twitter.com/RhwzHQVsUA

-- Tom Pelissero (@TomPelissero) August 23, 2020 Bills general manager Brandon Beane was then made available to the media and explained that the Bills were one of the teams impacted and that were would be several players missing from practice, but was unable to be specific.
Later in the day, ESPN's Adam Schefter reported that it was a false-positive test that kept Allen out and that he's expected to be back on the field on Monday.

Bills' QB Josh Allen received a false positive COVID test result and is missing practice today because of it, per league sources. Allen is one of six Bills who got false-positive test results this weekend. Allen is expected to practice Monday after going through proper protocols.

Once practice began at 11 a.m., Allen and the three defensive tackles were noticeably absent. From there, it was a normal practice. Players wore helmets and shoulder pads, but with shorts or sweatpants.

As far as the official injury report goes:
Did Not Practice:

Running back/special teamer Taiwan Jones looked like he stepped awkwardly as he was downing a punt early in practice. He stayed on the ground for a little while before trainers came over to examine his leg. He got up to move around, then went down again, then left the field on his own power, but did not return.

Rookie Tyler Bass was the only kicker who kicked field goals during the session. He was 4-for-6 overall, making from 34, 38, 42, and 45, but missing both attempts from 54 yards out. They were both wide right.

The team will be back on the field on Monday.